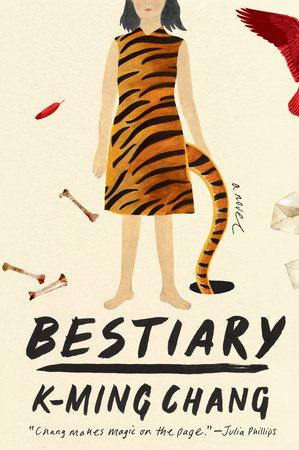 Reading poet (and Lambda Literary Award finalist) K-Ming Chang’s debut novel, Bestiary (One World, 2020), is a visceral experience. Its prose is relentlessly, ruthlessly corporeal, and it is fearlessly beautiful. Told from the point of view of Daughter, a Taiwanese American early-adolescence girl, the book deftly threads together three generations of women with each other, land, water, trauma, violence, and love.

Growing up in California, Daughter one day discovers holes in the yard. They multiply in number and depth, and are somehow breathing. They periodically spit out letters from her grandmother, who grew up in Taiwan but lives in another California town.“I, too, was a direct descendant of gravity, born from women who belonged inside their countries the way blades belonged inside a body,” Chang writes. The physical force of inherited violence, loyalty, survival, love, and queerness that Daughter embodies shows up in small and large ways. As Daughter falls in love with her classmate, a girl named Ben, she begins to translate the holes’ letters into English. She shares them with Ben, who helps Daughter translate the meaning of the letters further – to make sense of her past, her inheritance, and her own queer body. “Language is not what’s said but what’s silenced,” Chang writes.

True to the title of the book, the characters are steeped in their animalistic needs and desires, which feels like revealing a truth about human nature. Bestiary is chock full of body, and all the ugly parts, or the parts we’re taught are ugly, are revered on the page. Early in the book, Chang writes, “We prefer salt and sour and bitter, the active ingredients in blood and semen and bile. Flavours from the body.” So often bodies are written with softness, sweetness, especially when it comes to love stories and family stories. But Chang goes all in on the sharp. She artfully, and with precision, breaks the reader open by taking the ideas of intergenerational inheritance and memory and literally grounding them. There’s nothing wistful about it. The holes in the book are not imagined; they are real. Holes in the ground, holes in bodies, holes in language, holes that are hungry and holes as sources of something else – they exist simultaneously as metaphor, character, and setting. In this way, and in many others, Bestiary rejects binary categorization like poetry or prose, or magical realism. Instead, it creates its own landscape.

Much of this landscape is rooted in memory and myth, both of which exist in the bodies of the characters. “Memory is contagious,” Chang writes. “You’re my mother, I said, and you’re supposed to prepare me for any future. But who, she said, can prepare you for the past?” As the narrative approaches what could be called its most roiling moment, the reader finds themselves within the body of the book, as if it had its own lungs and muscles. As Chang herself writes, “To give something new shape, you have to break it.” Bestiary does just that, and it is wonderful.

The Tender, Canonical Queerness of All The Gay Saints
'I Am J' by Cris Beam
‘First Down’ by JJ Greene