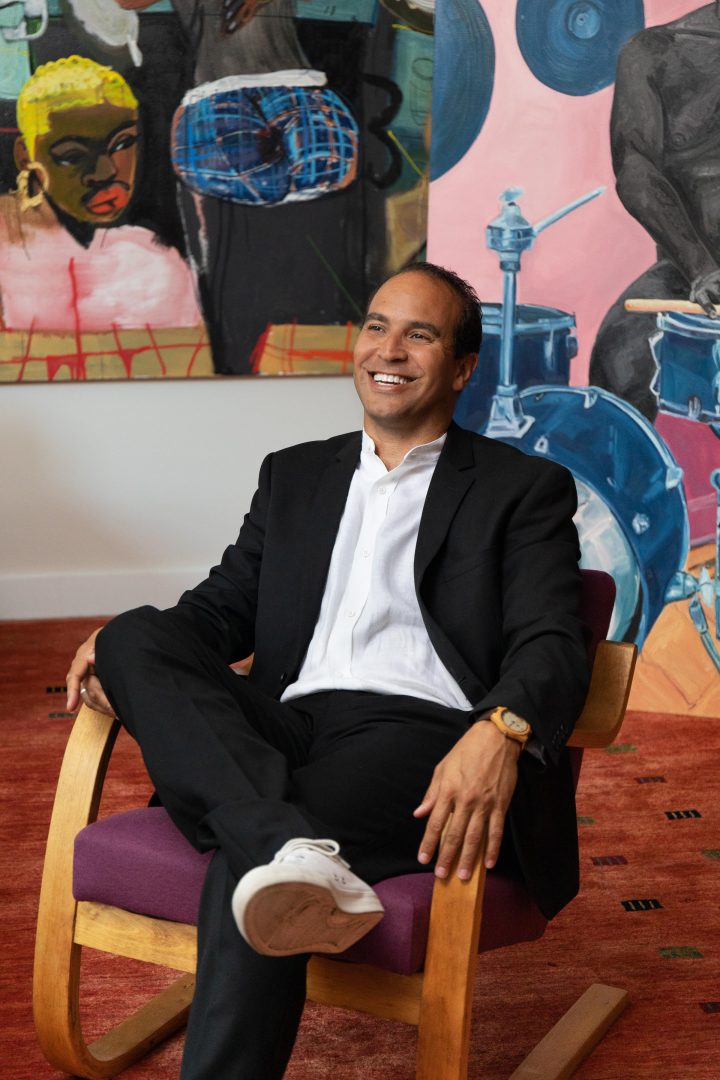 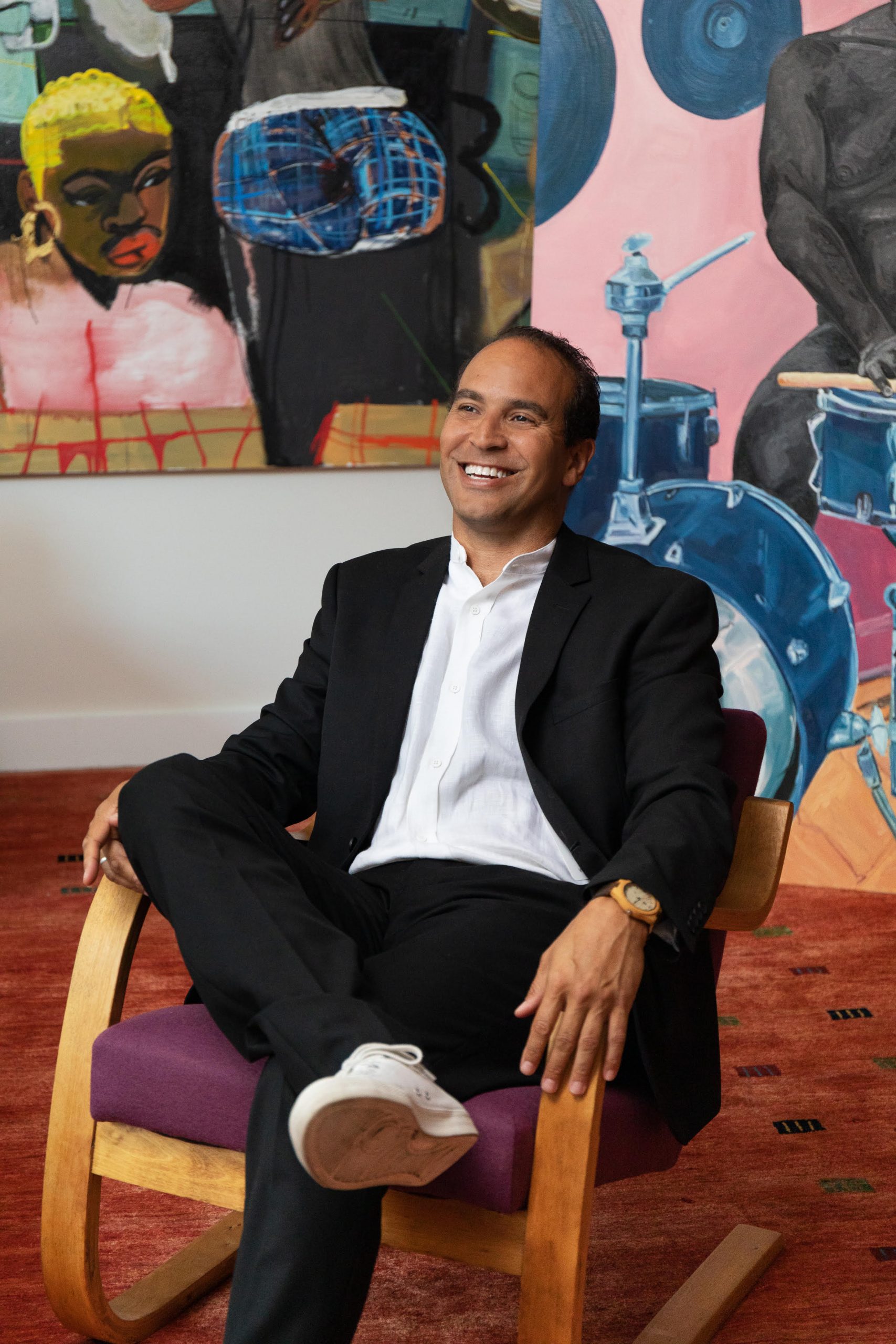 When you connect with an old friend you are bound to learn of some surprising life changes. New jobs! New marriages! New kids! It all becomes fodder for idle small talk. But what do you say when you discover that one of your old college buddies has become one of the premier collectors of contemporary Black art?

If you are a nosey art groupie like me, you send them a barrage of questions.

I first met Bernard L. Lumpkin in 1993, when we were both college students in Boston. Bernard was gloriously silly and exuberant, but that joie de vivre never obscured his sharp intellect and wide-ranging curiosity. Today, Bernard is a world-renowned contemporary art collector, patron, and educator whose commitment to both emerging and established artists of African descent is part of a broader mission of institutional advocacy and support.

Bernard and his husband Carmine Boccuzzi’s dynamic art collection is the subject of a new book titled Young, Gifted and Black: A New Generation of Artists. Edited by writer Antwaun Sargent, the book is a survey of the work of a new generation of Black artists, and also features the voices of a diverse group of curators who are at the forefront of contemporary art. The Lumpkin-Boccuzzi Family Collection is also part of a nationwide traveling exhibition that continues at the University of Illinois, Chicago in September 2021.

We met in Boston in the early 1990s as baby gays, at a gay college-affiliated dance party nonetheless. If I remember correctly, you were getting your Ph.D. in comparative literature. We lost touch for a while and then reconnected in the early aughts.

In 2001, I remember you inviting me to your apartment and you had this burgeoning collection of wonderful Black art. I was amazed. I don’t think you and I ever talked about visual art when we were in our twenties. So of course I am curious about your life as a collector. What sparked your interest in Black art? How did your studies in comparative literature shape your sensibilities in regard to your art collecting practice?

From where I stand today (married with three kids, including a 21-month old), my graduate-student days seem like a different life. At Harvard, in my twenties, I only had myself and my studies to look after. And even though I had already met my husband-to-be Carmine, he was living in NYC so there was a healthy distance between us which allowed us to grow independently while still being a couple. The growth I experienced during these years (1991 – 2000) was intellectual, emotional, and social. I had two sets of friends–my Harvard friends and my Boston friends. My Boston friends were an eclectic mix of queer creatives, including you William! Looking back, I realize that this motley crew of writers and artists of color–each of us socially and politically engaged with our communities–was my first experience with artists-as-activists, and it helped mold me as an art collector and patron. You William were at Emerson studying creative writing. And our friend Ban was studying graphic design at Boston University. I was working on essays and stories about growing up in a mixed ethnic and racial household. We shared each other’s writing, attended art openings (free wine and beer!), organized readings, and participated in campus coffeehouses. Didn’t we also try starting a literary magazine? Creative collaboration–whatever form it took–was our golden rule.

The social ferment of those years wasn’t just creative–it was also political. In 1993 I, along with some queer friends, boarded a midnight bus from South Station for the five-hour ride to DC for the March on Washington for gay rights. I think it was one of the largest marches of its kind ever? I had been involved in some queer campus activism on campus at Harvard but this was certainly the biggest political march I had ever attended. And it was also on this trip that I came out to my uncle, who was living in DC at the time. And he in turn came out to me!

So during these Boston years, I learned that collaborators could be change-makers, and collective effort could make a difference in the world. As an activist art collector, I wear many hats: I’m advocating for artists and museums, I’m lending my voice to the vital conversations about diversity happening now in the art world, and I’m helping inspire the next generation of art patrons through the Young, Gifted, and Black book and traveling exhibition. I don’t think I would be doing what I do today had it not been for my grad-school experiences of community and collaboration, art, and politics. Yes, I graduated from Harvard–with a Ph.D. in comparative literature!–but my education went far beyond what was happening in the classroom.

Your collection is filled with so many powerful LGBTQ Black artists. What are some of the through lines in the queer art in your collection?

For me, collecting art has always been a pathway to learning and discovery. Artists of African descent have taught me about race, family, and history. They have given me a better understanding of my own roots and my place in the world. When my father was alive, we had long conversations about his own experiences growing up Black in America: his boyhood love of math and science, his time at Columbia University during the social and political ferment of the 1960s New York City, and his struggles with prejudice in academia. The stories my father shared have provided a lens and a filter for my own experiences as a mixed-race person, and those of my children as well.

But race is not the only story I’m telling and teaching through the Young, Gifted and Black book and exhibition. Many artists in the collection are also queer, and their exploration of sexuality and sexual identity adds an additional layer of meaning and purpose in their work. In his riveting, intimate photographs D’Angelo Lovell Williams examines how life as a Black, queer, H.I.V.-positive person has been shaped by family ties and personal histories. Lovell Williams is working within a tradition of portrait-photography but as a queer Black man, he’s simultaneously redefining that. Jonathan Lyndon Chase’s exuberant paintings–bursting with sensuality and eroticism–invite viewers into the rich and layered complexity of the artist’s private and public lives. The artist draws and paints from daily life and everyday experience, celebrating in equal measure mundane moments (shopping, eating) with intimate ones (peeing, coupling). Hybridity is also a concern for Christina Quarles, whose gestural, abstract paintings playfully confront and confound definitions of sexuality and gender identity.  A multiplicity of perspectives is a hallmark of her paintings, in which naked human forms fold over and melt into each other. Figuration merges with abstraction as arms, legs, fingers dissolve seamlessly into lines, shapes, and patterns.

Multiplicity is the operative word here. These and other queer-identifying artists in the collection–like Paul Sepuya, Troy Michie, Jennifer Packer, Jacolby Satterwhite–are making work from the perspective of being queer and also being Black, and the interplay of these positions and perspectives captivates me, especially given the fact that I’m gay, Black, and Jewish too. The legibility of gender and race—and how perceptions of us influence our interactions with others and with our environment—is what makes their work so compelling.

My advocacy for artists has always been very public and communal—and that includes my engagement with the broader queer art community. Carmine and I have opened our home to museums and other arts organizations, hosting receptions, panels, performances, and other gatherings for artists and their supporters. One such organization is Queer Art, which provides mentorships and grants for queer artists. The event we hosted at our home for Queer Art was a celebration not just of art but community as well, and the conversation that happened that night went beyond art-making practices and strategies. It was about history, culture, and politics–and how artists and patrons can work together to make meaningful change in the world.

What is one major take away you would like readers to gain from this book?

The Young, Gifted, and Black book and the accompanying exhibition are about family, community, and collaboration. It’s a conversation: between me and my family, between me and a group of artists, and between those artists and the rest of the world. I hope that readers of the book, and viewers of the exhibition, will be inspired by these artists and their exploration of race, family, history—and will in turn lend their own voice to that conversation.

I remember being in your college dorm room and picking up your worn out copy of James Joyce’s Ulysses; you scribbled in the novel margins “This book is everything.” What are some Black paintings that fill you with that sense of expansiveness?

A book like Ulysses makes me think of the work of the celebrated abstract painter Norman Lewis, who makes beautifully complex canvases that are like mysteries waiting to be solved. Their meaning is not readily apparent; rather, the viewer helps create meaning by sitting with the artist’s work, reflecting on it, and wrestling with it. Art can be pleasing but it should also challenge you. Deciphering Norman Lewis’s paintings, like James Joyce’s prose, is a struggle that has also brought me a lot of joy. And, like in Ulysses, I believe that one can discover the whole world in an esoteric abstract painting. Their specificity and particularity is what underlies their universality. It’s a beautiful paradox.

Finally, I’ve always seen Lewis as an avatar for my father. My father was a Physicist who practiced a very philosophical kind of science that required a lot of deep-thinking. When I visited him in his lab, or in his office, I felt like I was in an artist’s studio. He was essentially an abstract artist. And like Lewis, my father’s career choice was not a popular one within his own family and community, let alone the broader world. Whoever heard of a kid from Watts wanting to be a physicist, who built a telescope from scratch when he was 16 because his parents couldn’t afford to buy one? But that was my dad. He loved science. But his parents wanted him to pursue a more traditional career path like law or medicine. But like Norman Lewis, my father stuck to his guns, followed his passion, and he—the kid from the ghetto pointing his telescope at the urban LA sky—never stopped searching for answers that others couldn’t see.