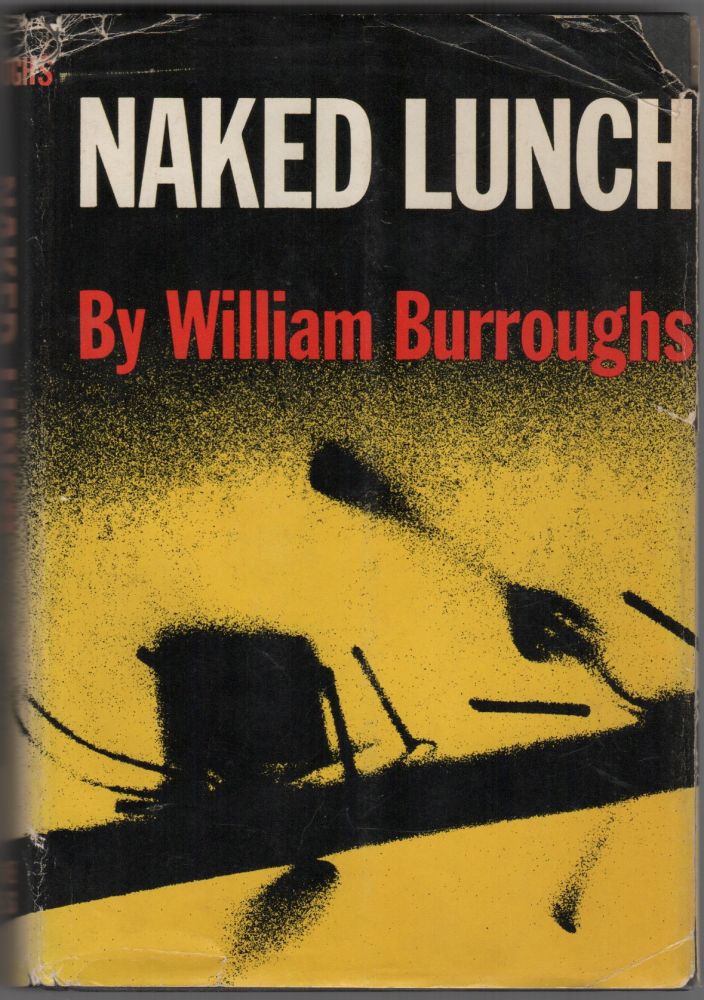 My Hungry Interzone: Coming Out and Reading Naked Lunch

My Hungry Interzone: Coming Out and Reading Naked Lunch

1995 was the year I graduated high school, started college, and earned my driver’s license. It was also very late in that year—only a week before rolling into 1996—that I knew for certain I wanted to be a writer, that international travel was essential, and that I was without any more doubt gay. I had discovered William S. Burroughs just a few weeks before my trip to Morocco, though I hadn’t planned it that way. An older friend from NYU, whose parents had been “close” with Allan Ginsberg, had turned me on to Burroughs. She insisted that my development as a writer depended on discovering Burroughs and Henry Miller “right then, and not a moment later”. She had a flair for heightened melodramatic pronouncements. The timing of the uncovering was kismet as Burroughs, of course, wrote Interzone and Naked Lunch while living in Tangier International Zone in the mid-1950s. Closeted, paranoid, consumed with the idea of novelty and defector irreverence, fascinated by the forbidden fantasy of homosexuality, made sophisticated and sexy by Naked Lunch, I located Burroughs’ magnum opus when I most needed it. His disillusioned oddness spoke to my cloistered queerness.

The trip to Morocco began with a sense of unease, both from my internal struggle with my desires and my ambivalent understanding of what it meant to be a Western tourist. Even at that young age, I understood the dangerous entitlement of Westerners visiting other lands, taking what they wanted with impunity, no matter the harm, and leaving the resolution of that harm to others. Burroughs, was born into an affluent family: his grandfather, William Seward Burroughs I, founded the Burroughs Adding Machine Company. Paul Bowles, a friend of Burroughs who wrote The Sheltering Sky while living in Morocco, was also “of means.” Many of the famous, “rich” writers who settled in Morocco to write their masterpieces set a legacy of well-to-do ex-patriots claiming foreign lands for their own amusement, escape, and luxurious productivity. They had all gone for different reasons and during different eras, but Burroughs claimed that what brought him to the North African country was freedom and anonymity: “[Morocco] is one of the few places left in the world where, so long as you don’t proceed to robbery, violence, or some form of crude, antisocial behavior, you can do exactly what you want.” I couldn’t blame anyone for believing we were all rich and entitled. Any American who could afford a trip to somewhere like Morocco was….

In Casablanca, I met a drama major from Chicago who looked like Sarah Jessica Parker. Her parents told me that she’d been miserable on the trip but lightened up once she met me. “Marla has really taken to you, Brian,” her father, a thin Wilford Brimley who practiced corporate law, had said. “You’ve really made this trip for her.”

On this same tour I befriended a political science major from Utah who possessed a wisdom beyond her years. She too had become enamored of me, telling me I resembled Tom Cruise, making me mix tapes of funky underground rock and jazz, and convincing me that I’d one day be famous. Adriana had been in Morocco with her two sisters and parents. “I love that every time I come to visit you, I see another shelf full of new books,” she’d said many years later when spending a long weekend with me in my Queens apartment.

Though the young women made for comforting travel companions, I’d felt nothing sexual for them. The ubiquitous Moroccan, Italian, and Spanish men, on the other hand, commanded me. Men appeared in kasbahs, restaurants, hotel lobbies, their beauty drawing me out. I fantasized about being dominated by any one of them, broken against my performative will, made to submit to their ardor. This lust was new to me. I’d pictured myself in Burroughs’s world, in the wild derelict fugue of secrets, intrigue, confusing sensations, illusory strolls, and intoxicating queer promise. The only thing missing were the drugs. I’d experiment with those years later, after graduate school.

In Rabat, I was invited into the backroom of a spice shop in a busy kasbah by a young Moroccan man, my age, the proprietor’s son. He offered me dinner—couscous with lamb and vegetables— and we shared a hookah. We discussed American exceptionalism, governmental overreach, and thought control. We also covered Islam, terrorism, Salman Rushdie, and stereotyped media portrayals of Muslims. He thought that I had the power to effectuate major change, that any single American was influential enough to reshape the political landscape or entertainment industry. His naivete was touching and his sensitivity was almost erotic. A pacifist, I’d already begun drawing parallels between my inherent meekness, my aggressive passivity, and the dismantling of the military-industrial complex. It was a large abstraction that I hadn’t yet known how to articulate. The proprietor’s son mesmerized me with his gentle touches and soft voice, his heavy eyelids and his sideways smirk. His intelligence lit up my libido. The nature of our conversation was the stuff of Interzone mythology. The novel fresh in my mind, I imagined this scene as if written by Burroughs, and maybe even played through it harnessing his agency.

“Just tell your president that the world does not want any more war,” he’d said before parting. (We’d only been four years removed from the first Gulf War in Iraq.)

In Tamri, goats balanced precariously on Argania tree branches. From a distance it looked as if they hovered in staggered formation. I first saw them on the bus and then approached on foot. Mostly white and black, the beasts contrasted the shaggy green and brown trees, their twisted branches reaching out like gnarled fingers. The goats ignored me as they fed on the tree’s fruit. They were deities, these goats in the trees, uninterested in the goings-on of the world, meek in their own mighty way. Unbothered by the demands of the ground, alighted on swaying branches in the sky. Again, I was never altered in Morocco, but the dreamlike experience reminded me of one of Burroughs’s fantastic voyages out of the ordinary.

In the years that followed the Moroccan holiday, I remained in platonic touch with the two women. During this time, the desire to emerge from the shell of the straight man within which I’d been hibernating grew deeper. Naked Lunch would also find its way into my life throughout the next ten years, that period of potent hallucinogens, straight sex with gay visualizations, and literary aspirations and setbacks. Like Genet, who’d I fall into years later, Burroughs made queer culture seem rebellious, cool, above morals and convention, impervious to ridicule and judgment. It was an artistic statement and a philosophy of spirit that no other writer or artist had provided me at that young age. The gay sex would come, though its arrival would be marked by tumult and humiliation, informed in large part by the musings of Burroughs. Naked Lunch was my default reference. No matter how lonely or scared or full of self-loathing, the novel served as a guidebook, an exit from the heteronormative theater that had become my life.

And yet even though the orientation had my respect—and covert identification—I’d not embrace it for another decade. As Burroughs asserted, “Exterminate all rational thought.”

Not enough has been written about how Burroughs murdered his common-law wife, Joan Vollmer, though the details remain ambiguous. What we know is that Vollmer was shot by Burroughs in Mexico City in 1951. The plot thickens when dealing with specifics. Had the evening been drug-addled, as some reported? Had Burroughs been re-enacting “the William Tell act,” in which his attempt to shoot a liquor bottle off her head failed? Had he been showing a new pistol to a friend when it fell, hit a table, and went off, as he later claimed? Whatever the horrible truth, he stated that the incident had brought him into contact with his “invader, his Ugly Spirit.”

I deceived the women in my life, used them as either covers or tests, and during sex as warm bodies with which to get off, even as I imagined scenarios involving Dwane “The Rock” Johnson, Mario Lopez, Brad Pitt, Antonio Sabato, Jr., at least half a dozen straight male porn stars, and few straight male friends from high school and college. I, too, had been confronting an “Ugly Spirit.” One of my girlfriends even asked me once if I would have climaxed harder with a man. She then said if she found out I was gay she’d jump out a window. She survived my coming out and is now thriving as a therapist in a committed relationship with a male burlesque performer.

For me, Annexia, the totalitarian government in Naked Lunch, was an internal monitor. The fascist was inside. He overruled my appetite and negated my impulses. Burroughs served me well here, again: “The study of thinking machines teaches us more about the brain than we can learn by introspective methods. Western man is externalizing himself in the form of gadgets.” Anything to be outside myself.

I was 28 when I first kissed a man, got naked with a man, had sex with a man. He was a photographer with a yen for much older men (being a year his senior rendered me “too young”). Our intimacy was at first chilly but then warm and temporarily even hot. More sensual than sexual, he preferred a deferential posture, revealed commitment issues that I’d learn would be common in the community, and after two months the affair ended as unceremoniously as it had begun. I was rid of presentiment. Free from clandestine fancies and exploited beards. The need for Burroughs dissipated in that encounter. Naked Lunch had satisfied its mission. As Burroughs asserted, “It is not the intensity but the duration of pain that breaks the will to resist.” The modern world of gay rights and gay love is a beautiful reality, albeit not nearly as intriguing as the universe Naked Lunch had intimated. I’m grateful for the privileges we are now afforded, but also glamorously bored by them, too. As Burroughs asserted, “The broken image of Man moves in minute by minute and cell by cell…. Poverty, hatred, war, police-criminals, bureaucracy, insanity, all symptoms of The Human Virus.”

Naked Lunch, the title provided by Kerouac, suggests looking at the world and at yourself, no matter how ugly, how unappetizing, regardless of your metabolism. “The frozen moment when one sees what is at the end of the fork.”

It’s no secret that most teenagers feel alienated and put-upon by the adult world of establishments and arbitrary values. The institutions of heteronormativity, conformity, and capitalism had felt oppressive and imposing to my 18-year-old brain. Finding Burroughs in Morocco while being too spooked to exit the closet provided me strange solace. His own undercover explorations of alien sensations and territories gave me permission to remain concealed, to stay a spy, a queer in hetero’s clothing. All these years later, his literature has retained its resonance, a protest against social compacts I’d never signed, and an embrace of misanthropy, a cozying up to radical tenets. And yet his revolution is fought gently, as, dare I say, meekly, as a “priest.” As I get increasingly acclimated to a quiet adulthood, to my own bourgeoise comforts—the comforts that kept me disingenuous all those years—I seek again a channel to sate a secretive, extremist hunger.

Brian Alessandro writes literary criticism for Newsday and is a contributor at Interview Magazine.