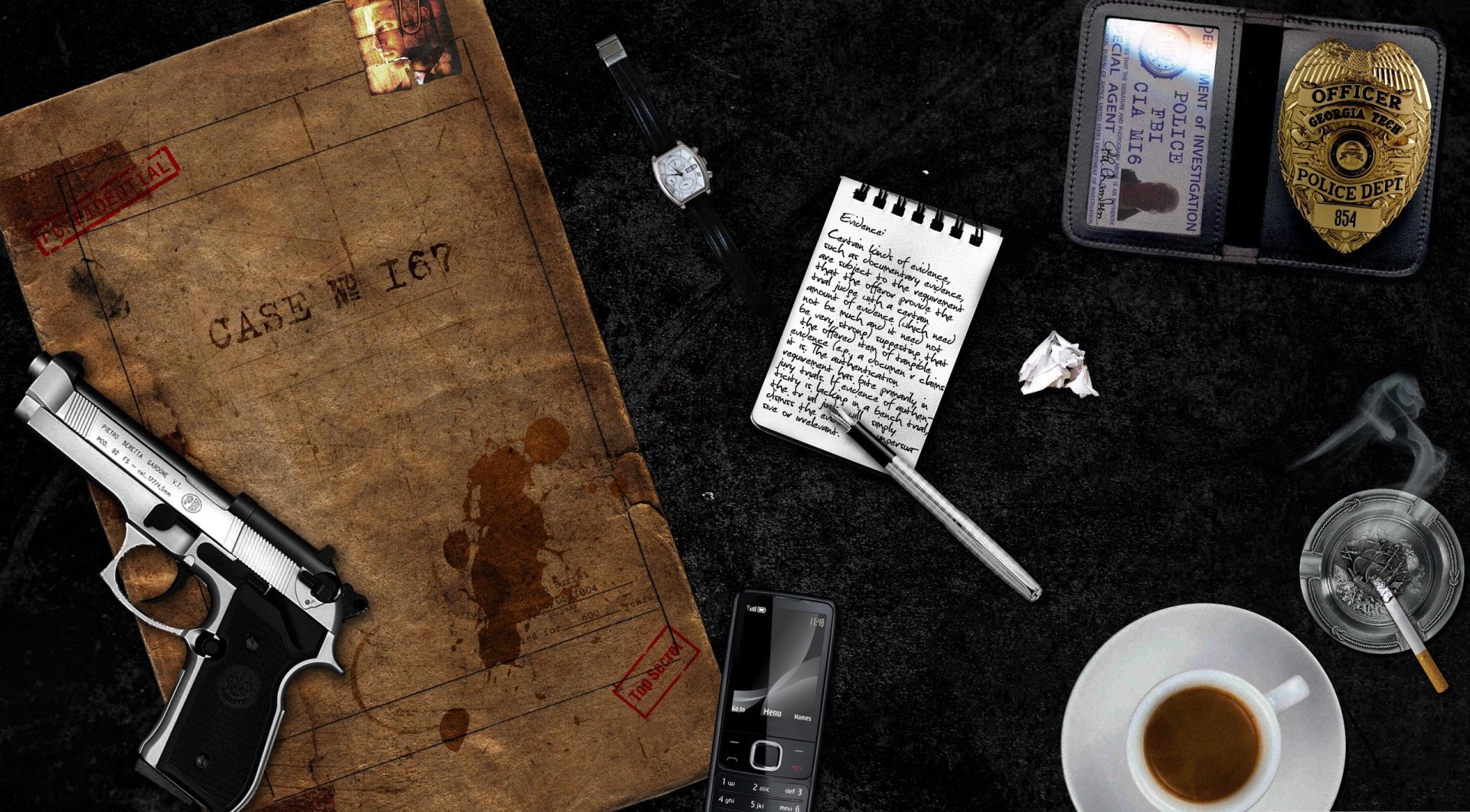 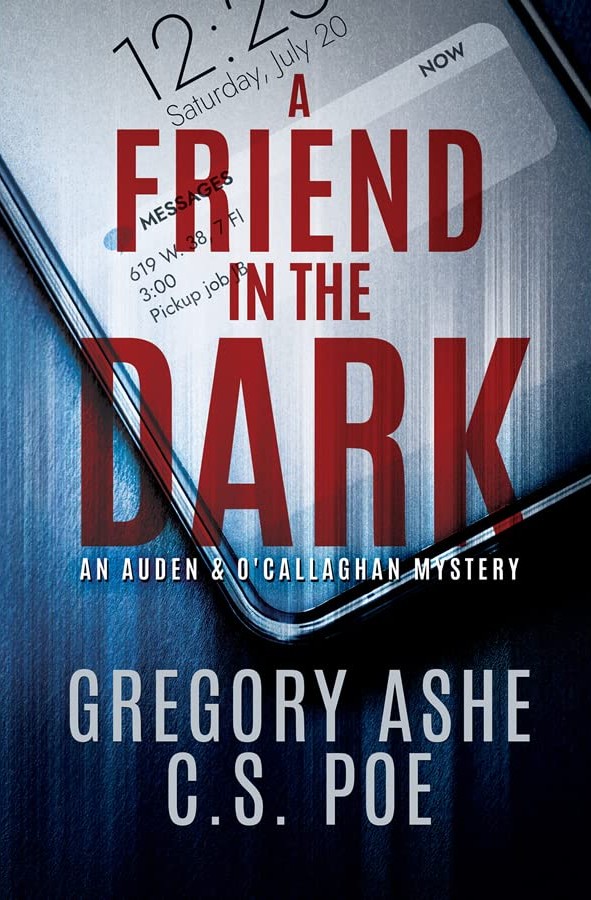 There’s this myth about the lone writer (often tortured, often male, often straight) hammering away at his Smith Corona typewriter, yanking pages out of the carriage, reading them with disgust, and wadding up the results until he happens on just the right phrasing. Eventually, this writer produces a work of genius, pulled from his imagination between slugs of whiskey and bouts of self-loathing. Although indeed writing can be arduous and filled with self-doubt, this myth implies that the creative act is solitary and deeply individualistic.

For that reason, I’ve become interested in writers who collaborate. It strikes me as both a difficult and admirable achievement. When I first picked up C.S. Poe and Gregory Ashe’s superb A Friend in the Dark, I was skeptical. Perhaps, even though I’d questioned it, I bought into the myth a little. Could a compelling work of fiction be produced by co-authors? Sure, it could be functional—plot and structure mapped out—but could the characters have enough complexity and depth to feel three dimensional? In Poe’s and Ashe’s new series, the answer is a resounding yes, which is why I reached out to them for an interview. I wanted to know more about their process and what it was like to work on a project together.

Before we jump in, a little about the book: set in New York City, A Friend in the Dark is told from alternating perspectives. Rufus O’Callaghan, a confidential informant for the police, finds his handler, Detective Jake Brower, dead and himself hunted by a killer. After leaving the Army under undesirable circumstances, Sam Auden has been drifting. When he learns that his old army buddy, Jake, committed suicide, he comes to New York to investigate, doubtful that his friend would’ve committed suicide. Sam runs into Rufus, and the two pair up to solve the crime. Rufus is a mixture of intelligence, street-savvy, and vulnerability, and Sam is brawny, aggressive, and emotionally guarded, his underlying sensitivity armored over. They are drawn into the case together and to each other: Will they get justice for Jake? Will they acknowledge their romantic feelings for one another? The book becomes as much a crime story as a story about gay men on an emotional journey, hence the rich emotional texture of these dual leads.

So, let’s begin at the beginning: What’s the backstory about how this project came to be?

Gregory Ashe: Carroll and I met at GayRomLit in 2019, when I bum-rushed her at the opening banquet and announced my love for her books (and, by extension, for her). We hit it off the next day at the bar. We wanted to work on a project together, but we needed an idea. I woke up in the middle of the night (no joke, my long underwear was too hot) and realized I had the germ of something.

C.S. Poe: I was really happy to meet another mystery author in the genre who was my age and roughly at the same place in his career as me. I learned that Gregory was not only extremely talented, but also super sweet, eloquent, and funny—all the makings for a friendship and partnership! And yes, a few weeks after we solidified a plan to write something together, I got a text that was along the lines of: my hot underwear woke me up at 2 AM and I had an idea for the book.

In A Friend in the Dark, you toggle between two third-person perspectives, Sam and Rufus. How did you work together to structure the novel and write it? Did you “pants” it or plan it?

Ashe: In spite of my best efforts to plot the book in secret, we wrote A Friend in the Dark without an outline. We wrote it together, literally: both of us sitting on the same Google Doc at the same time every day until we finished it. While we planned some of the major beats and turns in advance, much of the book took shape organically.

Poe: I never plan any of my writing in advance, so jumping into the deep end of this book without an outline was business as usual for me! Gregory and I had talked beforehand about our own methods of writing, and luckily, we both work linear and write a pretty polished product on the first go. I believe these similarities are what made the manner of how we actually did the writing itself, possible.

Rufus and Sam are very different gay men. Why were you drawn to these two characters? And how did you develop them into fully fleshed-out characters with compelling story arcs? (I imagine that wasn’t easy to do.)

Ashe: Developing the backstories to these characters was one of the few things we did independently (although I’ll let readers guess which character Carroll was responsible for and which one I was). Some of the character traits came about from necessity (we needed a connection to the police, a connection between the two protagonists, a reason for Sam to be in NYC, a reason for Rufus to stay involved, etc.). Some of the traits, though, emerged from our own interests. For example, I see [Sam] as a subversion of the two-dimensional alpha male stereotype that plagues much of the genre. We also knew that we wanted their arcs to take them across the four-book series, so we’ve planned to pace their growth (and their relationship) accordingly.

Poe: Even with character traits and backstories, I shy from planning too much ahead of time. I tend to figure out the arc of the character in the midst of writing—sometimes a passing comment in dialogue ends up being my a-ha! moment and then all the misshaped pieces of their life suddenly fit together. I’m drawn to writing characters that resonate emotionally with a reader. That’s not to say, for example, someone needs to have experienced the particular highs and lows of Rufus’s mental health in order to connect with him, but through his journey of very real human anguish and hope and sadness and joy, a reader sees themselves in my writing.

The novel is fast-paced and a blast to read, but it also seems to be commenting on healthy relationships between gay men. What theme or idea do you hope the novel communicates to the reader beyond being thoroughly entertaining?

Ashe: Thank you for noticing that. Carroll can speak to her side of this, but I certainly saw these characters as responding to tropes in the genre: hurt-care, for example; the abundance of characters with PTSD; the too-common association between physical size and sexual role; and of course, the ability of relationships to ‘cure’ myriad mental and emotional ills. Sam and Rufus are one way, for me, of thinking about what a relationship between two damaged men might (more) believably look like.

Poe: Didn’t I mention that Gregory was eloquent? Yes, to me, a relationship between these two characters is completely possible, but even with both invested, they’ve lived long and difficult lives, and those experiences don’t simply vanish. I’d hope that A Friend in the Dark, and the rest of the series, conveys that love is absolutely obtainable, but that it’s not always rose-colored—and that’s okay.

What was the most difficult aspect of co-writing a novel? Why?

Ashe: Giving up control! Because I’m a control freak. That’s something of a joke, but it’s also true. Most writers are control freaks—it’s an artistic mode that lends itself to complete control (or at least the illusion of it). I know readers have commented to me that this doesn’t feel like one of “my” books (at least, not 100%), but that’s both the price and the payoff. A Friend in the Dark is something I couldn’t have written on my own, and that’s a very good thing.

Poe: Trust. Gregory is the first person ever to see my writing, quite literally, as the thoughts are being typed, deleted, typed, deleted, blinking cursor … “Hey, are you thinking, or did you fall asleep?” Knowing that he has confidence in me to figure out what I’m trying to say and maybe notice that typo a paragraph prior—that’s a very powerful action between authors.

What do you think you’ve learned about yourself as a writer through co-writing a novel? Would you recommend it to other writers? Why?

Ashe: This is a difficult question. I certainly got something of an outsider’s perspective on my own process. Carroll was kind enough (and polite enough) not to draw attention to places where she had worked out better strategies for handling things, and so it was helpful to see her process as well. Writing, for me, is incredibly intimate, so there was certainly an element of vulnerability and exposure in this, but it helped me to see more clearly how I write, how I publish, and places I can improve. I’d recommend this to writers as something to try at least once—it may not be for everyone, but it’s certainly worth experimenting with.

Poe: Writing with Gregory has been a gift. Not only are these books the creative boosts I’ve needed, but his professional dedication, commitment, and ever-expanding talent has been something of an inspiration. I’ve told him a time or two, when struggling to make progress on my own projects, that thinking of his Powerhouse Ways has kept me from flinging an unfinished book out the window in frustration. He’s probably laughing while reading this, but it’s very true! I don’t think the co-writing process is for everyone, but should you mesh well with another author in terms of method, voice, and expectation—give it a go!

A Friend in the Fire (sequel to A Friend in the Dark) will be released in late-February 2021. They also have individual projects out this year. Ashe is publishing his final book in his The Lamb and the Lion series in January, and C.S. Poe is releasing a collection of short stories called Interlude, a companion to the Snow & Winter mystery series in early 2021.

'Unholy City' by Carrie Smith
Ali Liebegott: Highways and Byways
Read This! An Excerpt From the Riveting Novel 'Dodging and Burning'