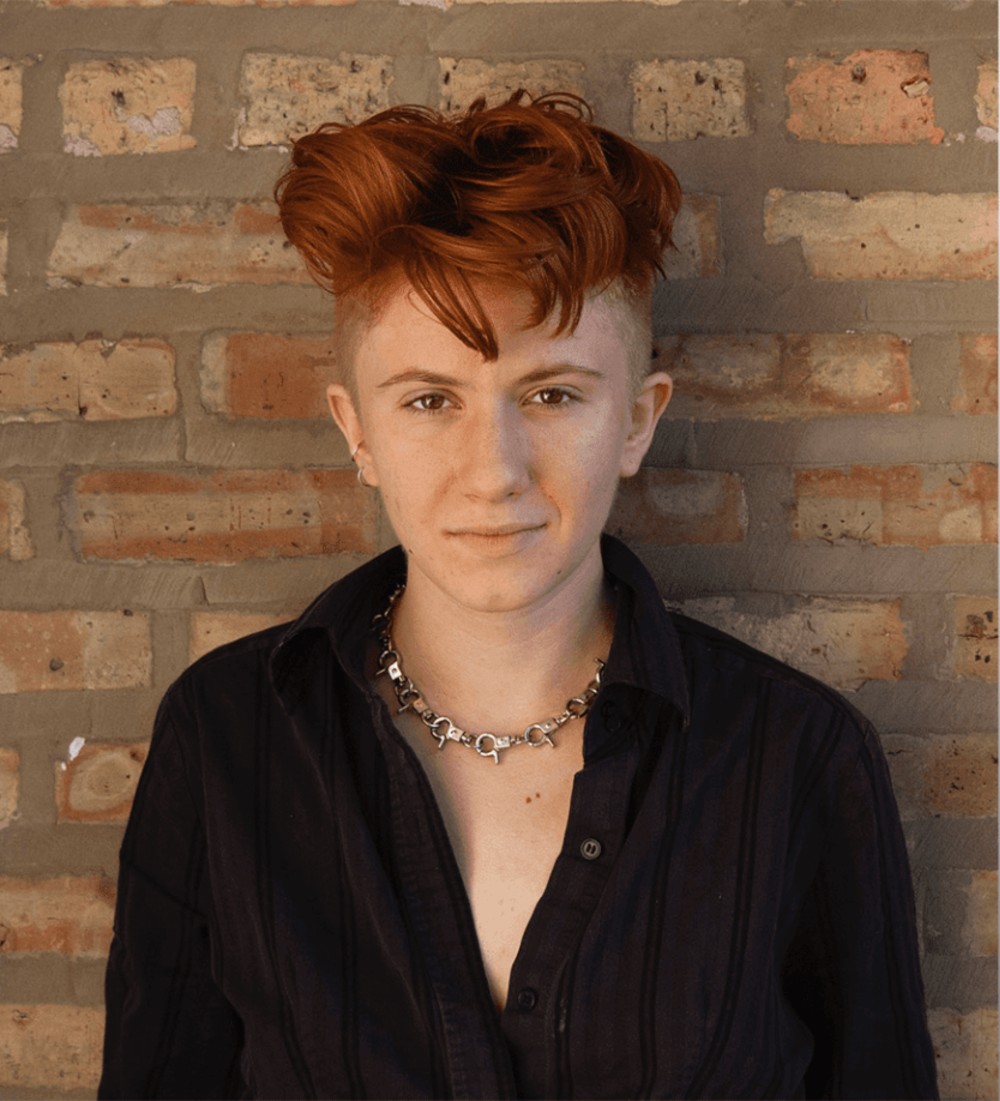 When writer and Lambda Literary fellow Hannah Abigail Clarke calls themselves terribly handsome, you cheer. On others, it would chip away faster than cheap nails to reveal braggadocio, but such forthrightness from Clarke is wrapped up–warm, folded-croissant style–in all of their essences of being, ably punching through the historical tightness of who may use a term like ‘handsome’. You experience Clarke, you necessarily celebrate. Or keep celebrating, as it were, since you may have seen that New York Times holiday gift-guide recommendation for their debut novel Scapegracers. Or that starred Publishers Weekly review. Or maybe you simply adore their work and are eagerly awaiting sequels.

Clarke’s Scapegracers follows an unpopular high school girl, Sideways Pike, who is introduced to the three most popular girls at a party. The unholy trinity wants to be her best friends, but there’s a catch…. They are all witches and want Sideways in their coven. With this debut novel, Clarke proves to be a witch of words and wonder, casting a spell with their magical lesbians. A non-binary, genderqueer lesbian, Clarke is dedicated to making sure their portions of queerness, including any intersections with being neuro-divergent, are honest parts of their writing and their life as a writer. But please don’t sully everything up by summing his candor up as ‘quirky.’ How about ‘more-present-than-most’ instead?

Reading poetry aloud to my cat!

I’ve got a few rings of writing-people that support me in my work. I’ve got a few peers who also write queer weird spec YA, some without deals, some very much with deals, who’ve worked miracles keeping my head above water the past few months by sheer force of their generosity, compassion, and tolerance for my terrible memes. I’m lucky enough to have connections from my time at the Lambda Literary Fellows Retreat who’ve been supportive this year as well, and people from my undergraduate and graduate programs alike. Also, my mom. My mom is deeply cool.

How did your Lambda Literary Fellowship influence your writing life or you otherwise?

Lambda was an excellent networking space, and I’m still good friends with some people in my cohort and the larger 2019 cohort beyond Young Adult Fiction. Prior to my time in LA at the retreat, I’d taken on writing in a solitary capacity, and in retrospect, it’s clear that the isolation was mostly self-imposed: There are so many brilliant queer writers doing work right now that invigorates me, and walking in lockstep with my peers certainly makes me a stronger writer and person. Also, I’d never visited the West Coast before. I keep fantasizing about going back.

Scapegracers centers high school and related experiences, in the way Scream or The Craft or The Perks of Being a Wallflower does. What went into the veracity of the environment, character age and otherwise?

I wrote Scapegracers when I was nineteen, barely out of high school and vividly angry about most things. Coming-of-age stories situate characters in a moment where they have all their revelries about who they are, about their community and how it does or doesn’t fit into the broader world, about the way they were raised, their values, et cetera. While I’m not the character Sideways, I’ve certainly been in lateral situations, weathered some comparable trauma fits, and trudged around not-dissimilar rural Midwestern towns in a body that gets read as queer at fifty yards. Many of the affective beats are real. Her story is real in its way, I think, even if it seldom maps directly onto mine.

What has it meant to be a lead new series for Erewhon, a new imprint of Workman?

Erewhon is excellent. I’ve loved all of the other work that I’ve read from the imprint thus far, and I’m deeply fond of the entire team. I think it’s a rare and lucky thing, having an editor who not only gets the core of one’s project but pushes you to be queerer on the page. I was the first hardback out of Erewhon, so I wasn’t entirely sure what to expect, but I’m endlessly grateful that they’ve had faith in me and my work. Biased, but I think Scapegracers is among the prettier book objects I’ve ever seen. They’ve done good by me.

The right to exist strikes me as a theme of your work. Do you see this? What are your thoughts on what led to this in your writing?

There is a certain inclination I’ve seen in some LGBT narrative that reads like, “It’s alright that I’m gay, because I am just like you, so therefore you ought treat me as you would anybody else.” It does little for me. I’m more interested in queer narratives that don’t explore assimilation; I need stories about characters who are different and are aware of this difference and want to be and exist among others without feigning otherwise. Speculative fiction feels like a good place for the kind of stories that interest me in that regard; spec fic seems a good play-space for alternative narrative frameworks, radical new ways of feeling and being, endings that might be otherwise-precluded from narrative possibility, and onward. We can blame this impulse, I think, on spite and hope in equal measure. I’ve certainly got plenty of both.

Beyond writing, what does it mean for a queer writer to successfully be involved in the literary ecosystem?

I don’t think there’s a singular correct answer to this question, and I imagine that someone who has been working in the industry longer than myself might approach it differently. For me, at least, it’s been about reading widely, uplifting other writers’ work, and generally being as unabashedly queer as I’m willing to muster on Twitter dot com. I’ve got a lot of admiration for my peers, and I hope to be as gracious to new writers as my now-friends have been to me. Golden rule and so on. I’ve been rather forthwith about my particular subgenres of queerness, and I think that’s been helpful in that people with overlapping kinds of queerness who want stories about us have been able to see me and thereby find my work. I imagine this level of visibility isn’t desirable, or safe, for everyone, and I think it’s quite possible to navigate the industry without being the way I am, but it’s something that I’m glad I’ve taken on for myself.

What’s something you’d like to see in the future of queer #ownvoices writing?

More dyke books. By which I mean: I’d like to see more narratives that are unabashedly queer, decked with queer characters of every stripe, who are seldom respectable and are ill-met by structures of power. Less gender-conformity would be good. More exacting language, as well. I’d like to see the word ‘dyke’ in books more often. I’d like to see queers that are scarcely legible to cisheterosexual audiences. I have every confidence they’ll keep up; I’ve read straight cis stories my entire life, and look at me now. Also: polycules, found families, intergenerational queer kinships, magic strap harnesses, melodramatics and monstrosity and jaggedy heartbreak and triumphant joy, and plurality, also solidarity, cool tattoos and more forehead kisses.

Winners of the 26th Annual Lambda Literary Awards Announced
Roz Kaveney on the Potent Sexuality and Humor of an Ancient Roman Poet
In Remembrance: Anthony Veasna So