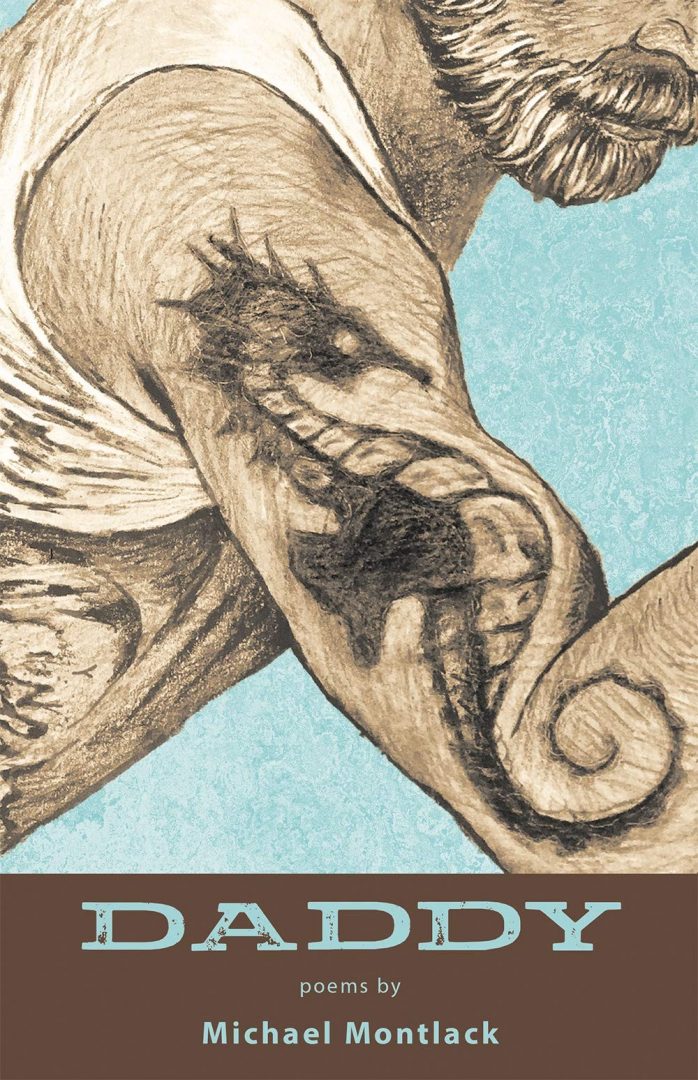 Daddy Offers a Warm and Tender Exploration of Masculinity

Daddy Offers a Warm and Tender Exploration of Masculinity 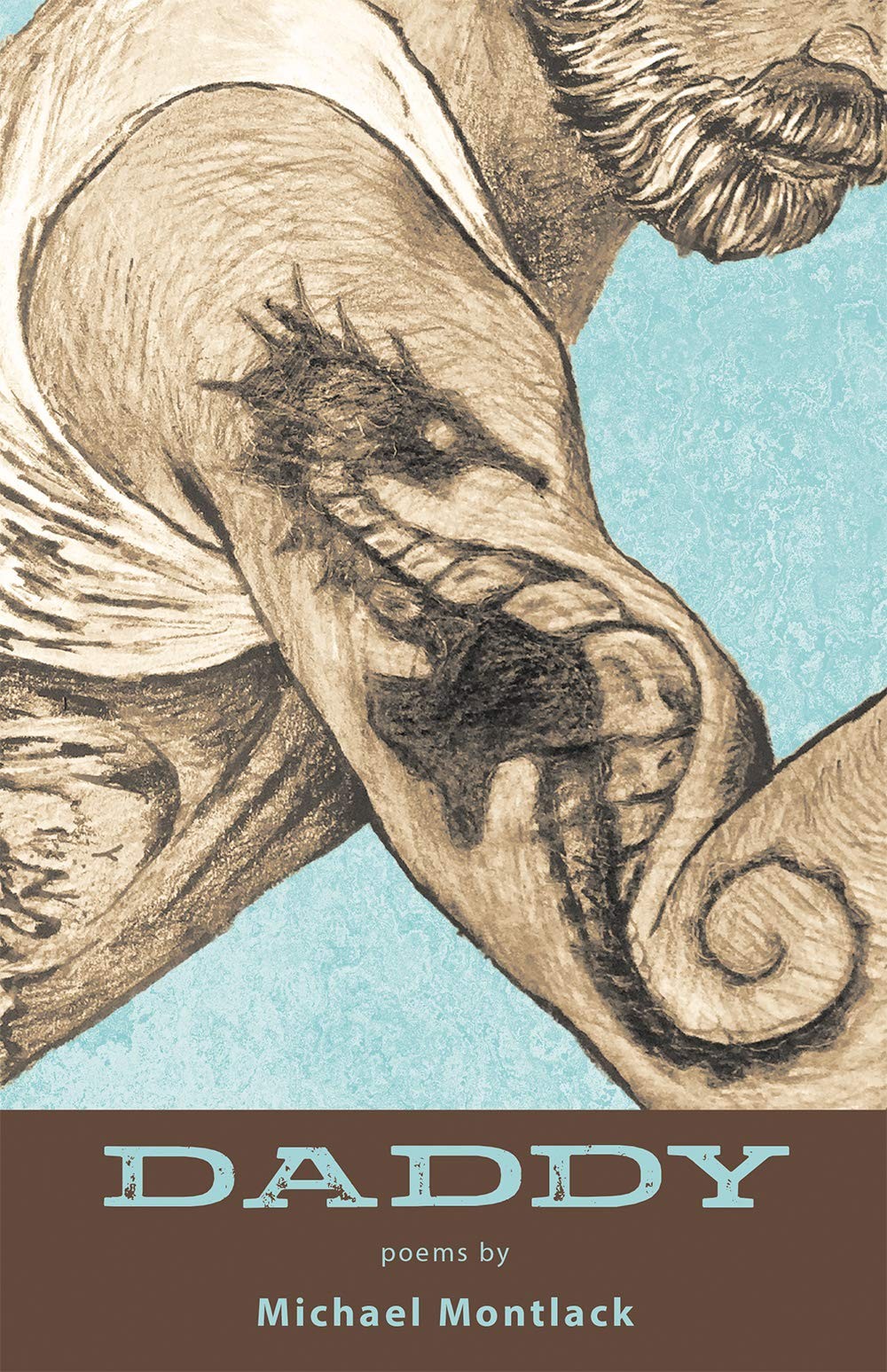 “Tender,” “gentle,” “warm” are just some of the words I thought of after reading Michael Montlack’s poignant poetry collection Daddy. These words we seldom associated with masculinity in the past and the simple title of the book Montlack has chosen abounds in a host of contexts both straight and gay. The poet reveals to us that early on his biological mother described as “girlish, sweet” birthed six children and then “abandoned or surrendered” them. The poet and his sister Michele were summarily adopted out as infants. Identity and the quest to understand one’s heritage and family history is at root for much of this book. Montlack in essence must negotiate on his own the difficult constructs of masculinity in response to both his biological and adoptive parents.

Be it a working-class father who has grown into a heart-disease-ridden old man, or a psychotherapist who with his gay partner become role-models and surrogate dads to a confused and distressed gay teen poet; or the sexual fantasy role-playing the poet is frequently asked to act out for his gay and sometimes straight hook-ups, these all become aspects of a gay son’s evolution into manhood. Another male figurehead is the brave immigrant grandfather of his adopted father who flees Poland and accepts an entirely new culture and country. In a like manner, the pop singer Stevie Nicks and a hardy pisser of an aunt named Alice, as well as the biological mother who defied the family norms to run off in the 50’s to Florida, are all maternal influences on the “orphaned” son struggling with his identity.

Montlack tenderly parses together the complexities of his childhood life. He and his sister Michele, adopted as well, are offspring of marked rebelliousness. And the mature poet-son finds in his own life and that of his idol, Stevie Nicks, a deep affinity toward the rebel’s credo. Of course as a gay man, he lives a rebel life by default. His female role-models have all bucked the status quo and no one could claim to be his creator, instead his creation must come from his own imagination, something he had to assemble from gossip, family tales, and the strange working-class characters that provided for him family life.

In essence, Montlack’s book confronts the oldest theme in literature, the search for the father or the mother, the origin story, and the quest to find out what made us who we are. And, as we know, this answer can never really be answered for any of us, although a happy home and nurturing adults can overcome a good part of our natural fate. We do in the end often see how the journey and its fictive nature are much more important—and fun, of course—than the final end point of arrival.

As we confront our lives as Americans in 2020, we are enduring perhaps our harshest reckoning over our identity. We live in a time of great uncertainty. We are searching for a narrative, a new narrative that encompasses our diversity. Thus it is rather calming and heartening to read Montlack’s verse for its genuine honesty. He is kind and warm to the people who have informed his life, seeing in them their humor and pratfalls from being human. I love such poems as “And then there was fire. . .” and “Family Affair.”  These poems describe this “ordinary man,” the poet’s adopted father, the working-class “middle-aged” working stiff, described in “Esmeralda” as the “pot-bellied father—/ some oily work pants daily (pale, hairy/ butt crack peeking out despite the belt)—”. This simple man who has suffered a series of strokes in old age, we are later told in “Family Affair,” has agreed to adopt a dog. The father announces:

And let’s give him a gay name! my father blurted.

A gay name? Was he joking or overly medicated—
this puppy meant to cheer him after his last stroke.
Why a gay name? I asked.

I dunno, he said. I just want a gay name.

And my gay son to name him.

You tell me, he said. You’re the expert.

Who da hell is that?

I love Montlack’s ability to capture character, his deft ear for conversation and the colorful giftwrap which he sees surrounding us all and the way he unties life’s bright bow of inner strength. I love his lovely youthful heart and his remarkable ability to love and forgive and delight in life. His is the rarest masculinity of all, the kind that just is, bearing his desire and perplexity, a man still very much in touch with the boy.

In his poem “Esmeralda” the poet describes a coy joke which his adopted Mom played often with her children. She’d suggest that their father was being unfaithful with a woman named Esmeralda:

As real as Santa or the Easter Bunny
whenever my mother muttered your [Esmeralda’s] name.
Your father’s late for dinner again!
Bet he’s with his girlfriend Esmeralda.

You sounded so exotic. Like Mexican cities
where The Price is Right, sent hysterical winners.
Foreign. Sexy. Naughty. I could picture you:
long wavy brown hair, a red strapless dress,
sleek as one of my mother’s Virginia Slims.

She tossed salad in her Tupperware,
letting the dog eat whatever greens fell
to the linoleum. My sister offering to call
the station again—as if she wanted to
catch him. Not see if our mother was lying.

No one else working today captures as well the campy gay vernacular of the past, with its sense of care for the love between men who live the impossible, who everyday struggle to see themselves as real and free. As Montlack says about his persona in his final philosophic poem:

It’s all packaging. Sugary
glaze on a stale donut. Like
selecting the perfect outfit
to wear to an orgy—no,
simply deliver me
the way I came in.