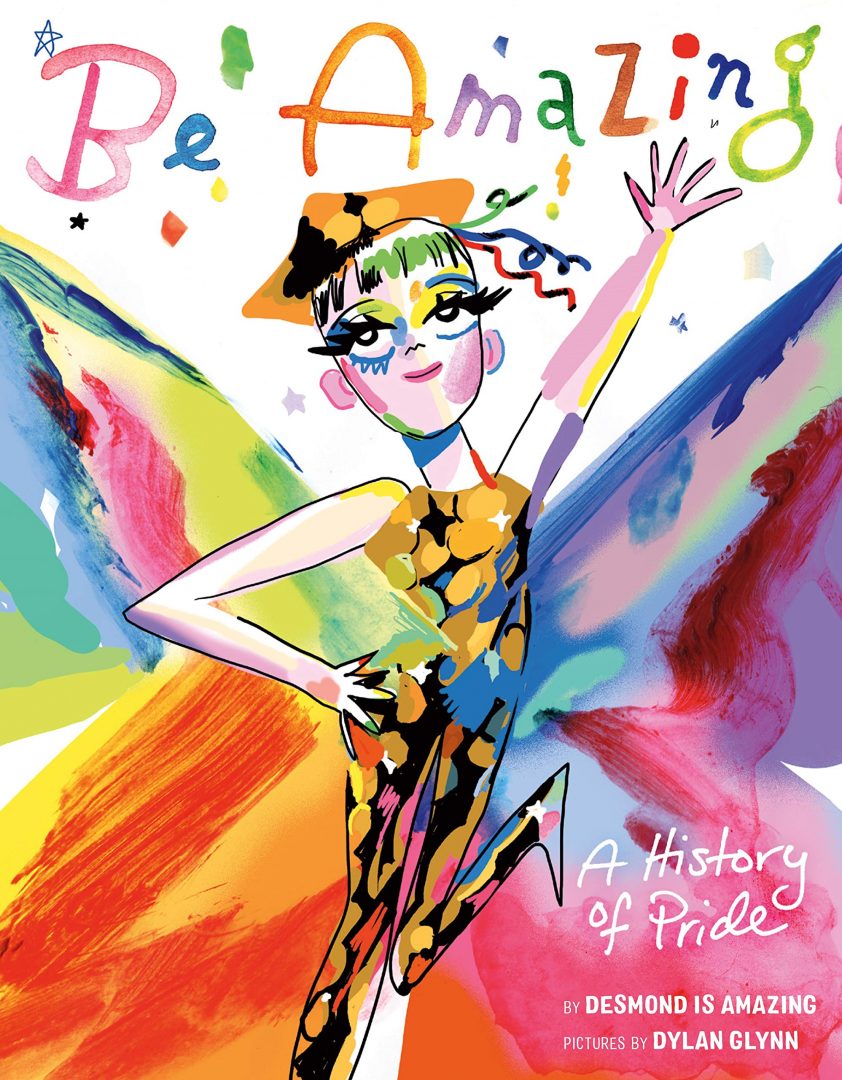 “Be Amazing: A History of Pride” as a Gift to My Younger Self

“Be Amazing: A History of Pride” as a Gift to My Younger Self 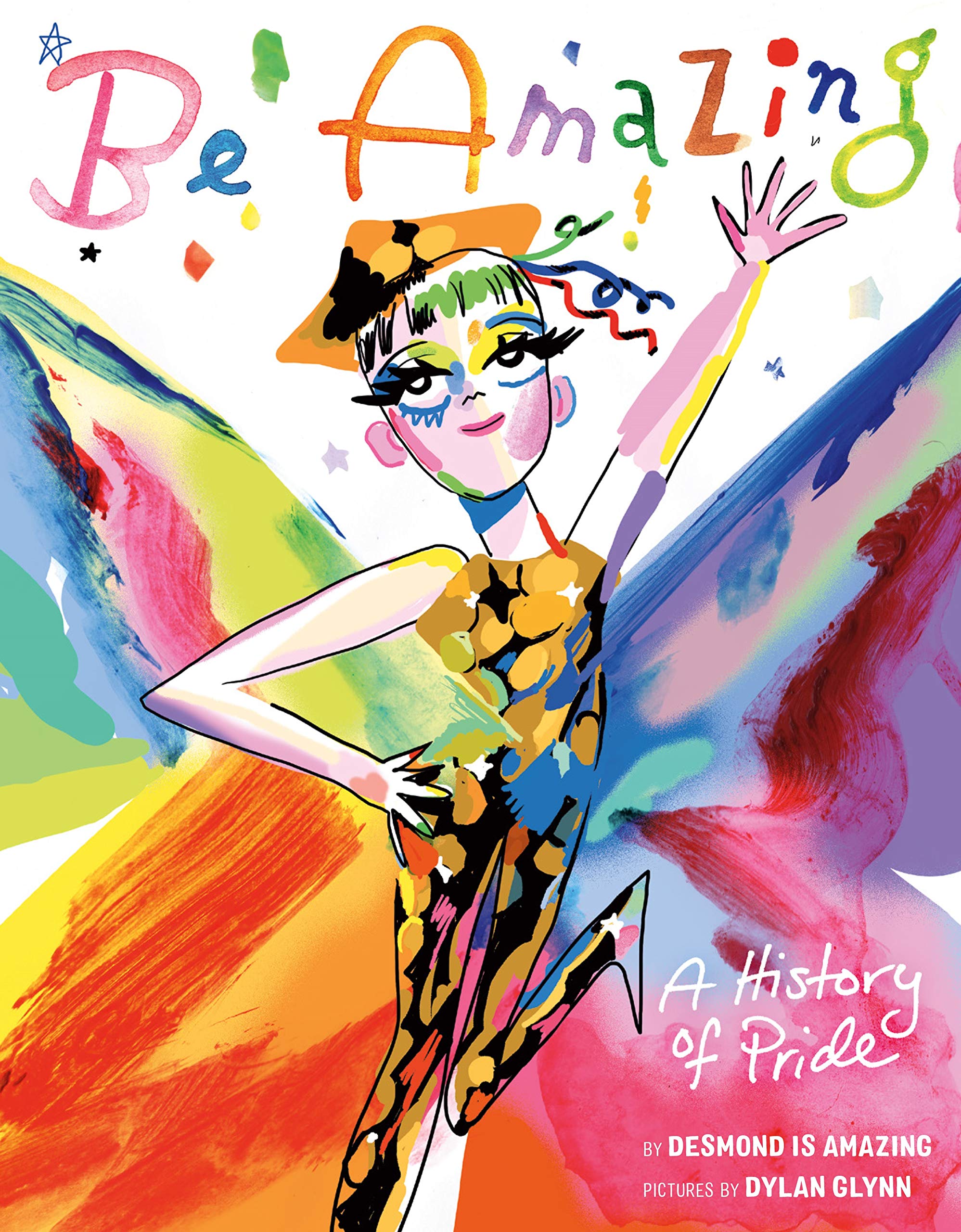 It took me a long time to find language to explain my experience. When I was a child, I often played with my brother and his friends. He was always my first choice for a playmate, and he never disliked having his at-the-time sister hang out with him. I was always grateful for this experience. I don’t believe I had the language to explain why I delighted so much in this sacred time with him. These days, I am aware that I was able to experience some form of boyhood through living with my brother. One exchange between my brother and I stands tall in my memory. We were lying on the front lawn together, sharing a Coke. We had sweat on our brows, we had just finished playing frisbee. He leaned over, passing the icy cold Coke can to me when he said “I feel like you’ve always been more of a brother to me than a sister.” Oh, the joy of being seen. This was just the beginning of my identity journey.

Self-definition is extremely difficult. Finding out who you are, what you stand for, and who you want to be is no easy feat. When I was a teenager, I had an overwhelming sense that I didn’t like myself, that I didn’t belong in any social circle. I think that this teenage headspace is common. High school is hard. I believe it’s the first place where kids are fully aware of social culture, biases, social strata, and so forth. High school age is still very young, and traits like emotional maturity and empathy are still in the works. I remember feeling like every aspect of myself was on display for other people to digest, judge, interpret. A lot of my peers in high school were rude and diminished me. I’ll never forget how many of my peers told me I was a dyke, butch, “the biggest lesbian they’ve ever seen.” Not only did I find it rude for my peers to foist these terms against me, but at my core, I felt they were just plain wrong.

I knew from a young age that I was always more attracted to girls than I was to boys, but I had no idea that I was transgender. I only ever knew one transgender person, and he was bullied relentlessly at school. I had a lot of internalized transphobia. I am not sure that the blame lies solely on movies, media, television, and the American culture at large, but yet these items are inextricably woven into my consciousness of transgender identity. The only mentions of ‘trans’ people that I saw were poor parodies and performances, like Mrs. Doubtfire, or any number of grossly misinformed representations of queer people in sitcoms like The Simpsons, Family Guy, and many others. In my teenage years, I was increasingly dispirited by these representations. I knew they were damaging stereotypes, half-hacked caricatures at best.

When I wasn’t inundating myself with grossly misleading representations of who I now call community, I often found my nose in the spine of some kind of romantic YA novel. I had read a wealth of Sarah Dessen, Sarah Mlynowski, Scott Westerfield, and Laurie Halse Anderson. After some time, I had realized that all of them followed a similar romantic narrative between male and female protagonists.

I was delighted to read these stories, but yet again, I found myself straining to find any part of myself represented on the page. I didn’t identify with any of the female characters, nor did I identify with any of the male characters. I found the male characters to be dramatized, overly sex-crazed, and toxic at times. I felt that the female characters were boy-crazy, and all too interested in their feminine appearance than I ever was. I felt let down by what I engaged with. I hadn’t found anything where I felt even slightly represented, even for something as small as appearances.

These days, I am extremely heartened by seeing so many queer characters on television, in movies, and in books. If I could change anything about my own identity journey, I would do everything possible to take out the shame from my experiences, my gender experiments, all of it. I believe that sources of shame can all be found through stereotypes in the media we digest. If one were to look closely enough, one could see stereotypes in movies, television, books, podcasts, radio, everything.

Literature has the power to transform how we think, interact, and act. It can challenge you to look deeper into your own psyche, probe the deeper corners of your brain and maybe, in some cases, interrogate your synapses to change. I’m not suggesting that literature indoctrinates audiences in any way. Rather, I am suggesting that it can cause a reader to pause. And in that pause, the reader can choose what they want to believe.

If I could give my younger, more insecure self a gift, I would choose to gift the book Be Amazing: A History of Pride by Desmond is Amazing. In the illustrious pages of the book, young drag queen Desmond is Amazing explains a succinct and accurate point-by-point history of queer liberation. Desmond draws on early movement makers like Marsha P. Johnson and Sylvia Rivera, and winds the tale through to the present, to world-renowned drag icon RuPaul. In the book, Desmond highlights complex themes like police brutality and queer prejudice in a way palatable to young audiences.

The message I would have wanted to instill to my younger self can be found on the first full page of the book. Desmond says his motto is, “Be yourself, always.” And, in a very discreet way, Desmond highlights on this first page that he is able to be himself because his parents have always been open to him. This point is very important for any pride discussion, because a lack of acceptance from family members and close friends is the leading cause of suicide amongst the LGBTQ population.

After Desmond eloquently explains the history of pride, the next-to-last page is a short glossary of LGBTQ terms. Oh, the joy of being seen strikes again. Part of what made my identity journey so difficult was a lack of information. If only I had been informed sooner, I would have been able to accept myself at a younger age. The personal identity journey is made more difficult by a lack of knowledge, a lack of representation. It is hard to navigate the social world when you feel as if you are not part of it. If we can build community and spread this knowledge, we can envision brighter futures. We can eliminate shame, nip it at the bud, and welcome our queer children to the world with open arms.

I appreciated that Desmond made the pride narrative rich, full of complexity, something to be recounted with a head held high. I, personally, find a lot of solace in history. I like to feel the texture of our past, and intimately involve myself with it. I believe it is always important to look to the past to explain a future, because we can see what did and did not work for a movement. It comforts me to know that LGBTQ figures have been a part of history far before the Stonewall Riots, far before the World Wars, far before colonial history. Rich, honest histories, are what I seek, and I firmly believe that children should know queer history. If we can teach children about colonialism, foreign wars, Civil Rights movements, we should be able to teach them about queer history. Queer rights struggles are linked to all of these moments.

Thank you, Desmond, for encouraging young kids to look within themselves, find who they are, and be that undiluted self. It is no easy feat, but I believe that the more we can encourage children to break out of norms, the easier it will become for those children to move to adulthood and chart their own identity journey. The more we educate about queer identities, the more common we make it, the better. I think it is important for everyone to investigate themselves. I also think it is hard for someone to define themselves, find who they are, when they aren’t represented. I think it can be hard for someone to fully own themselves, when they look around and see hatred and invalidation directed toward LGBTQ people.

There is more to be done, always. Rich, honest education, and accurate representation are a great start. The more we can encourage young minds to see the myriad ways of being, the better off they are in eliminating the shame they may feel in their identity journey. There is no sense shaming yourself for being, in essence, yourself. We have a limited time on this earth, and we may not be able to change how the world sees us. However, we can change how we see ourselves. If you are LGBTQ, you are part of a rich history of predecessors. We stand on the shoulders of giants, and we are amazing.

Lambda Literary brings LGBTQ books and authors into classrooms so that all students can see themselves reflected in the books they read.
Learn more about our LGBTQ Writers in Schools Program.

You can support this initiative by donating today.

LGBTQIA - A is for Asexual not Ally: Asexual Writers and Queer Ace Stories
In Conversation: Writers SJ Sindu & Gabrielle Bellot on the Publishing Industry, Marginalized Identi...
'Sometimes She Lets Me' ed. by Tristan Taormino

Leo Rachman is a queer writer and musician living in the Northeast. He is often inspired by music, and uses piano playing as part of his writing and storytelling process. He is a recent graduate of Mount Holyoke College, and hopes to pursue a future career in writing or publishing.