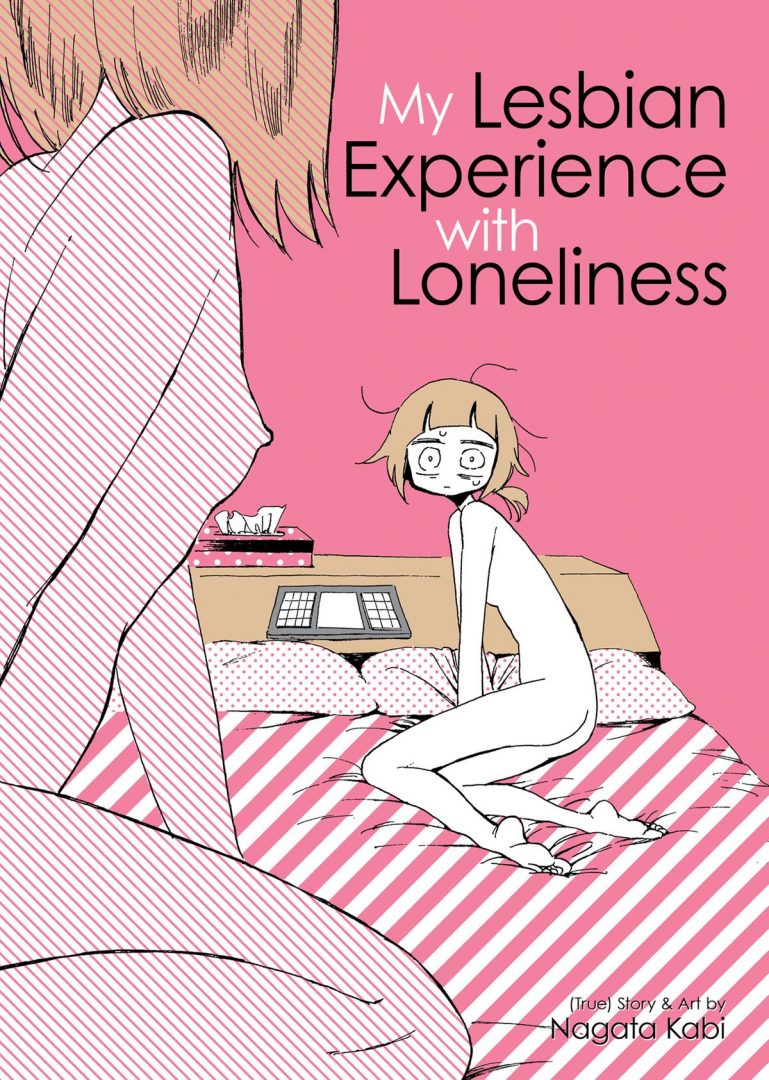 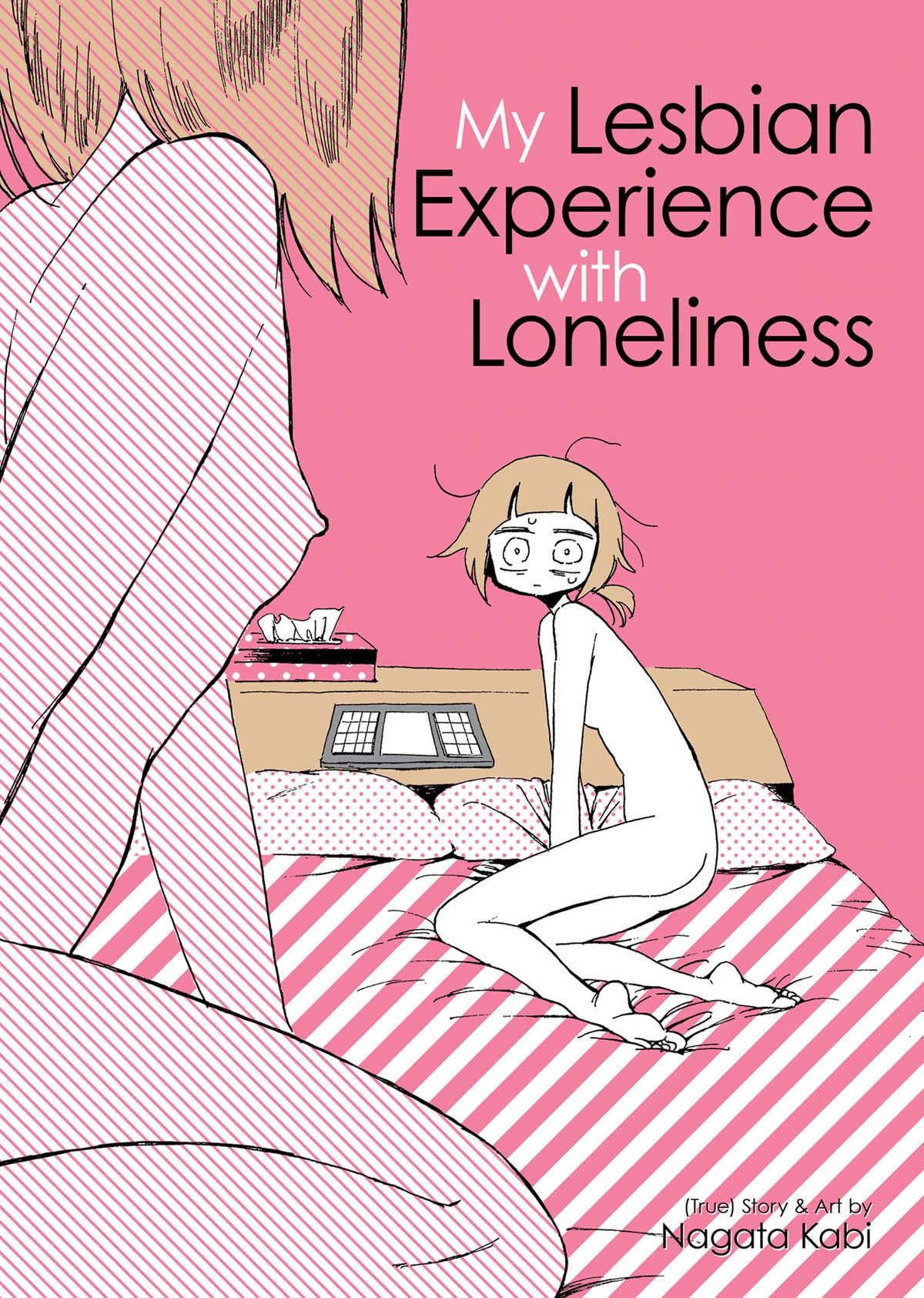 In the first chapter of Kabi Nagata’s candy-floss colored, autobiographical manga, My Lesbian Experience with Loneliness, the author finds herself in a sparsely decorated love hotel with a female escort, Yuka.

Kabi Nagata is 28 years old, semi-employed, virginal, and critically out of her depths. So how did she get here? Her emotional and personal struggles are manifold. She doesn’t feel she deserves to eat. She has a bald spot on her scalp which is a constant source, and reminder, of her anxiety. The next chapters explore the circumstances that lead up to her meeting Yuka, from familial relationships to mental illness to failed employment ventures.

Set against a lonely city backdrop, the next chapters of the memoir explore the circumstances that lead up to Kabi meeting Yuka, from familial relationships to mental illness to failed employment ventures. Kabi’s experiences are singular and yet painfully relatable. Who hasn’t overshared at work or sought an adult experience behind their parents back? In the love hotel with Yuka, Kabi cannot bring herself to touch her. Although Kabi later berates herself for not acting on her longing, she also discovers her desire for intimacy extends beyond sex. She just needs a hug.

Originally published on the online platform Pixiv, My Lesbian Experience with Loneliness details Kabi’s journey as she yearns for unconditional acceptance and belonging. Incidentally, these emotions are what drew me to her story, as one of the most recent experiences I had with these feelings happened in Tokyo, where I undertook an artistic project documenting couples in the lesbian nightlife scene. In preparation for this project, I fixated on a singular fact; there was no terminology to refer to female-female love until the Meiji era which began in the mid nineteenth century. This historical lack of a distinct term indicated only erasure of female same sex relationships, not their absence, yet I fixated on this without fully acknowledging what else it meant: the modern emergence of visibility. In talking with many queer Japanese women, I saw a tentative hope for a future with full legal rights granted to queer couples, towards a future where queer women could be out publicly, if they desired, without repercussions.

When contextualized, it became clear that My Lesbian Experience with Loneliness is a vital queer text. Kabi’s reactions to erasure illuminate shared experience, and her responses seem familiar, tender, and comforting. For example, towards the end of the book, Kabi reflects on her lack of sex education. “I wish they’d teach you this in school” she says while learning, for the first time, about the hymen on yahoo answers. Not being taught how to conceptualize oneself as a sexual being is an obstacle in the way of successful interpersonal connection and, for me, a quintessential queer experience. Which is where the text’s vitality comes into play. My Lesbian Experience is doing the work the mainstream cultures shys away from, foregrounding the queer sexual body without fetishization, and treating queer intimacy not as taboo, but as intrinsic to humanity. Through Kabi’s female gaze, this comic paints scenes of gentle intimacy. A particularly poignant scene occurs as Yuka bathes Kabi post-coitus, and she discovers, “sex is communication”, too.

In a way, reading this book felt like entering a queer community. It was me, Kabi, and everyone else who’d read it before me. As Kabi agonizes over her loneliness, I conversely felt more connected, as I recognized parallels in my own life. There is a significant scene in the book where Kabi interviews for a job at a bakery which she does not get. The interviewer’s most important question, however, is not to do with past pastry experience. Rather, the interviewer asks Kabi what she really wants to do. “Probably manga”, Kabi replies. When she leaves the bakery, albeit still unemployed as ever, the interviewer pops his head out the door and, smiling, wishes her “good luck…with manga.” Reading the published product, which has been recognized by the publishing company Takarajimasha, The Anime Awards, Publishers Weekly, and Teen Vogue, we know this will be Kabi’s first success story, but she is just beginning her journey. She still has to sort through her dependency on, and disdain for, her mother, and she has plenty of long nights lying in bed, staring at the ceiling, obsessing over her fears, ahead of her. Being drawn into Kabi’s community felt like dramatic irony on a grand scale. I knew—while she did not—that she would parse this loneliness and ultimately create artwork which facilitates connection.

In the midst of the pandemic, this work reads as an isolation tell-all, exploring how life can appear stagnant even while our inner lives are turbulent. Recently, I’ve been struck by nostalgia while watching movies with large, boisterous crowd scenes, and thus found the panels in which Kabi contemplates her anxieties from the safety of her own home especially comforting. I’m similarly comforted by the community Kabi finds online and through her work, presenting alternative modes of connection as entirely viable. And I’m comforted by the serialization of Kabi’s journey, which doesn’t end in the love hotel, or with the publication and success of her manga. It is followed up by the My Solo Exchange Diary and My Solo Exchange Diary: Volume II . In these sequels, Kabi’s opinions become more nuanced and her familial relationships begin to mend. Growth and healing are presented as what they truly are—a process—which we are invited to join. The fourth installment, My Alcoholic Escape From Reality, will be published this January 2021. I wonder where we will be, and how Kabi’s interiority will comfort us then.

Detransition, Baby is a Deliciously Femme Queer Drama
‘When I Was Straight’ by Julie Marie Wade
'Theatre of the Unimpressed: In Search of Vital Drama' by Jordan Tannahill

Lizzy Lemieux is a Senior at the University of Pennsylvania.