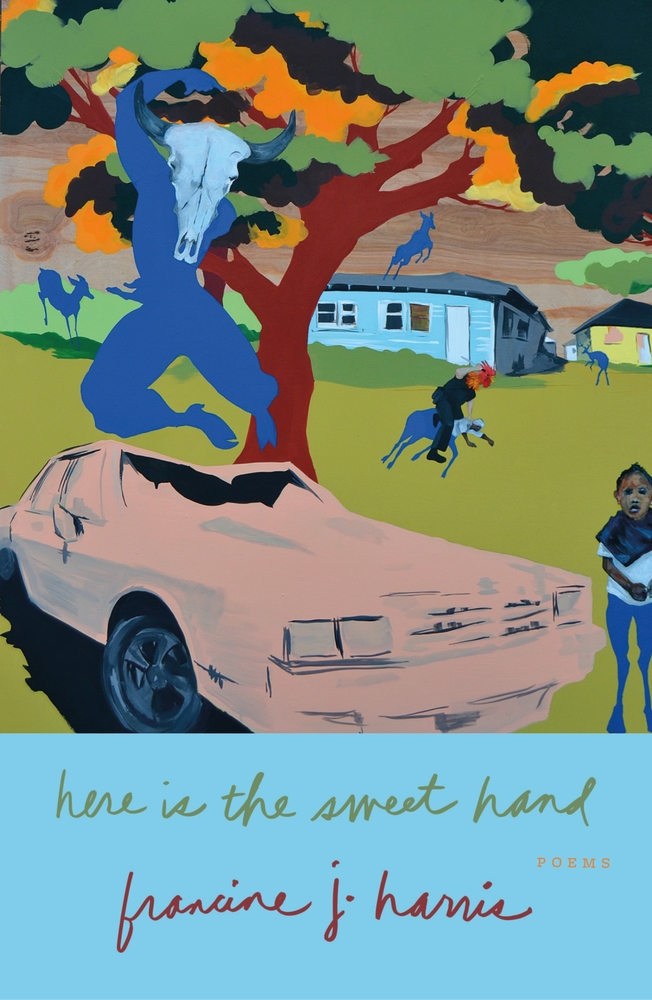 The Expertly Wrought Here is the Sweet Hand Contains Humor, Desire, and Terror

The Expertly Wrought Here is the Sweet Hand Contains Humor, Desire, and Terror

Full disclosure, I like prepositions to help out in the small ways I expect, and if a verb is used as a noun, I want it to be a gerund, ending in “ing.” The poetics of francine j. harris have better things to do, though, than to meet my expectations, as are clear in the opening poem “Versal” in Here is the Sweet Hand, just out from Farrar Straus Giroux:

The wood is not a negro with tree in the farm-split sand
for almighty, not a road to bend over,
not a lakeside, or sideways log stump, not
a sidelong, not a strangler clutch

or fruiting body of fungus …

Through its own image-led logic there is certainty of purpose, and in the closing line of this poem, there is “a black girl standing in it” — however elusive a reference “it” might be, she is the center, and for that reason, I want to continue reading.

To put these thoughts in context, I read Corrina Bain’s brilliant Muzzle Magazine review of harris’s early book, allegiance (Michigan Writers Series, Wayne State University, 2012). Bain writes, “allegiance often does not make sense. It succeeds, however, in doing many other things,” and she goes on to tell of consulting with fellow writer Jamaal May, crediting his explications with helping her produce many “of the more intelligible bits” in the review.

For me, the portal of access to harris’ work opened when I watched Jami Macarty read online from her collection The Minuses (Colorado State University, 2020). As with harris, it could be said Macarty’s work “often makes no sense”—but the seductive authority in her voice gave me places to put my feet as I hiked through it.

This inspired me to watch harris reading her work in a number of YouTube videos—my favorite is the 2016 “Voluble: A Walk in Interlochen”—and I was taken by the unaffected tone in her voice, the inarguable loyalty to her own truth. I returned to Here is the Sweet Hand humbled by how much sense it actually does make, flashes of meaning hiding in plain sight.

Here is an example from “Limulus Polyphemus,” the title a reference to the horseshoe crab:

… Whatever we bled out

was given to white men for research before they kicked us
back to sea, half faint, half apocalypse …

As a lesbian, I also felt what could be called affinity with her work, as in “Ask me now and I would say”:

In this retelling, I get beneath her

in the greased grass. I watch the star
in her eye and we

roll over it. We unbridle that shit.

And by the time I get to “Against Storm, Against Glib Thunder,” I’m all in:

When I was the red umbrella, her lover, I made a precision of hoist.
We understood stairs, my girl. We waited the hall, its curse, ’til the sky
undid clouds, uncoiled in loose slip of rain and I waited for the first
hushed sun to pattern after a harp above her, a sure sign of song as tarp,
a sun against patter, against storm, against glib thunder rumble, against
chatter, we rubbed.

The titles themselves dare the reader to let go of expectation and join in harris’s vision. In “The fat of the fog hovers over,” she writes, “[…] I was on the phone/for hours with a woman I keep getting it wrong with./I tried telling her which fruit I cut too early”

Yep. Been there. And it seemed clear she had cracked open my heart and trained a light on its secrets when I read “Rabbit”:

… He hobbles and eyes. This
is the dumb allegiance. This bunny, even dry and fluff
is aware, be vicious. will bite down your finger stalk.
will nick you good in the cheery web of your palm.
Those claws are good for traction. and defense.
This bunny, forgive him…

… Nothing
makes us happier than another rabbit.

This is a book full of “heat,” of being beneath and being above, of desire, neighbors, the news, the horrors of systemic racism played out in a 19th-century orphanage and a shooting on a train — all presented without the censoring influence of traditional continuity.

There is also humor in harris’s work, as in “Single Lines Looking Forward or One Monostich Past 45,” a poem that stacks up sensible yet unexpected declarations: “Sometimes when I say something to white people, they say, ‘I’m sorry?’” and “If I were grading this, I’d be muttering curses.”

In this same poem, she takes my fidelity to narrative and grammatical expectation down for the count, once and for all: “Is it me, or is the sentence, as structure, arrogant.”

And she ends that line with a period, not a question mark, because there is no point in questioning Here Is the Sweet Hand. It is better to let her voice be the center and take pleasure in change.

'Marcel Proust: The Collected Poems' by Marcel Proust
A Poem by Malcolm Tariq
“I want no ending,” and Neither Will You: 'Chord' as Continuation and Expansion of Rick Barot’s Exce...