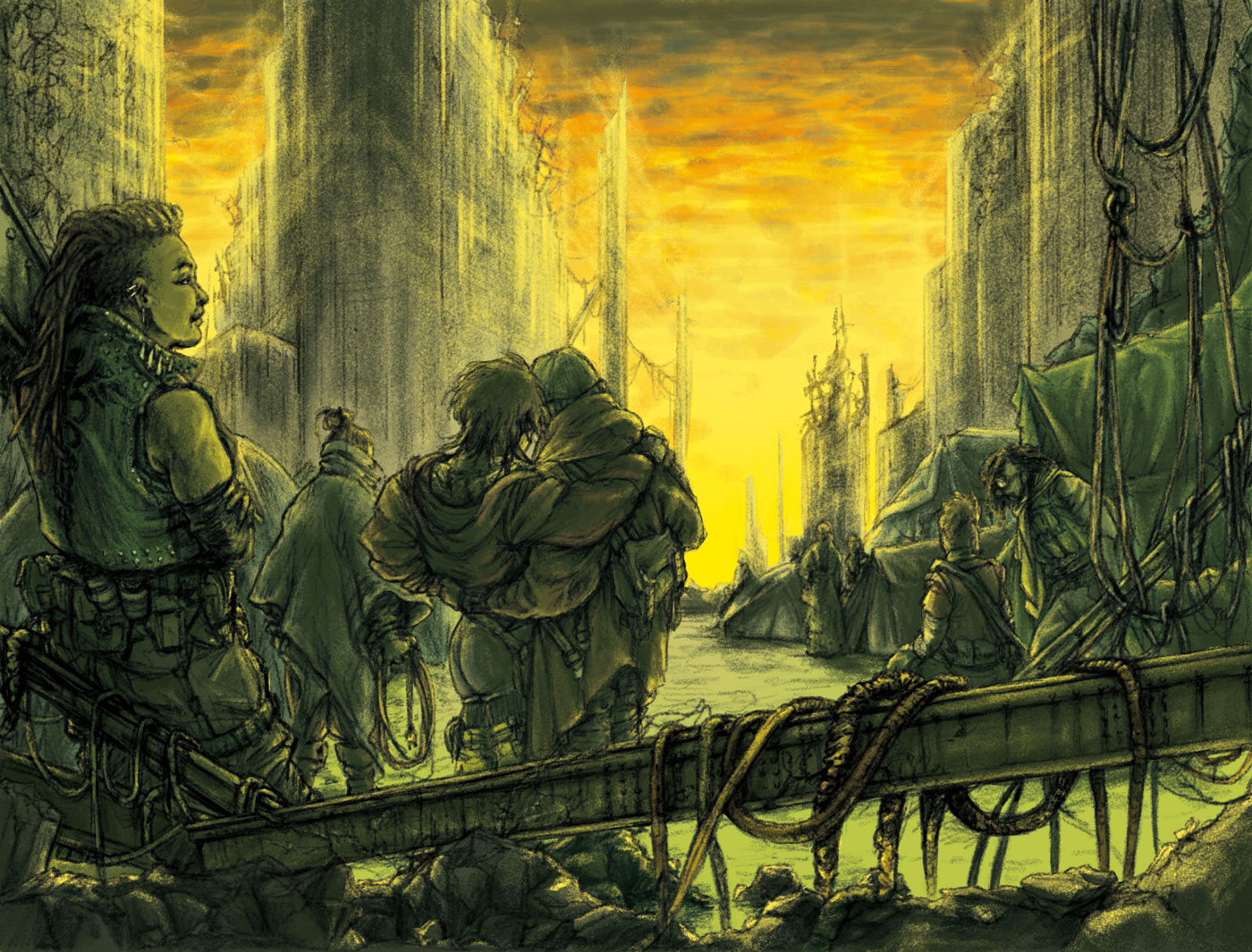 Here is an image: three college students sit sprawled on couches in a dormitory common room. Papers cover the coffee table stationed between them. One of them says, “My name is Always, my gender is predestined, and the looming threat I alone truly understand is that the psychic maelstrom sends wolves to devour us.”

We’re playing a tabletop role-playing game, and the questions being answered in this statement are ones the game has asked directly. From here, it’s a conversation, a mutual give-and-take of collaborative, improvisational storytelling, sometimes wandering away from the narrative entirely and sometimes focusing in on the tiniest detail of a particular scene. There’s a structure to it, but there is no dice rolling, no figurines on a map, no one person with authority over the story.

Here’s what the current edition of D&D, published in 2014, has to be say about gender:

You don’t need to be confined to binary notions of sex and gender. The elf god Corellon Larethian is often seen as androgynous, for example, and some elves in the multiverse are made in Corellon’s image. You could also play as a female character who presents herself as a man, a man who feels trapped in a female body, or a bearded female dwarf who hates being mistaken for male.

It’s certainly well-intentioned, if kind of awkwardly phrased. But I can’t help but be frustrated by the idea that I need permission to play a trans or gender non-conforming character—that there apparently has to be a deity involved for an elf to be non-binary.

The game I described in the opening paragraph is called Dream Askew, and describes itself as one that “gives us ruined buildings and wet tarps, nervous faces in the campfire glow, strange new psychic powers, fierce queer love, and turbulent skies above a fledgling community, asking ‘What do you do next?’”

The character sheets in Dream Askew each list a series of gender options that often seem to defy that descriptor, ranging from “woman” and “bigender” to “predestined” and “raven.” Gender is

a gender exploded, extracted from the society intact and made mutant. … When you encounter a gender word, imagine. Ask your fellow players. Flirt with a search engine. If nothing comes up, invent. No matter how you come to your initial understanding, it’s yours to continue to define through play.

In other words: gender, in Dream Askew, is a part of the gameplay. And that feels accurate to my own experiences of playing the game.

Dream Askew is a game that takes my hand and says Yes, good question, why don’t we talk about that.

What Dream Askew does that D&D has no interest in attempting is center queerness in the very core of its rules. To play a straight cisgender character in Dream Askew is to not be playing Dream Askew.

Of course, another thing it does differently is gleefully eschew many of the trappings of a traditional roleplaying game like Dungeons & Dragons. No one rolls dice, or does complicated math, or worries about combat rules. It’s far from the first or the only game to do this, but it was one of the first of its kind that I played. I suppose that’s part of why I keep coming back to it.

“Story games” of this type abound (more and more so, in this internet age where virtually anyone can write something and post it online in an instant). They are, of course, not inherently queer. Any medium can be used to further bigotry as easily as representation. But for me personally they’re inextricably tied up with experiences of queer community; I cannot think about the games I’ve played without thinking about the friends I played them with. In this time of social distancing, it’s something that keeps us tied together, and I’m more grateful for that than I could possibly express.

Dream Askew, I hope, illustrates the ways that the text of a game can be an important determiner of its themes in play. You can play queer characters in D&D, and many people do, but that’s not the same thing as D&D being itself queer. And just as Dream Askew isn’t the only story game, it’s not the only one centering, or simply created by, LGBT+ people.

Sleepaway is “a game of horror, dreams, and summer camp” based in the same rules-light framework as Dream Askew. Star Crossed uses a Jenga tower to tell a story about forbidden romance. Mutants in the Night is about people with superpowers in a dystopic future that criminalizes their existence. i’m sorry did you say street magic has players build and characterize a fantastical city over the course of play. Stewpot follows D&D-style adventurers trying to adjust to a more domestic lifestyle. The list goes on.

Not all of these are games that I’ve gotten a chance to play myself, but all of these games inform my broader awareness of what I know roleplaying games can be. I hope they can do that for you, too.

Sarah Donnelly is an astrophysics student who moonlights as a writer, or possibly the other way around. They currently live in the Northeastern United States.