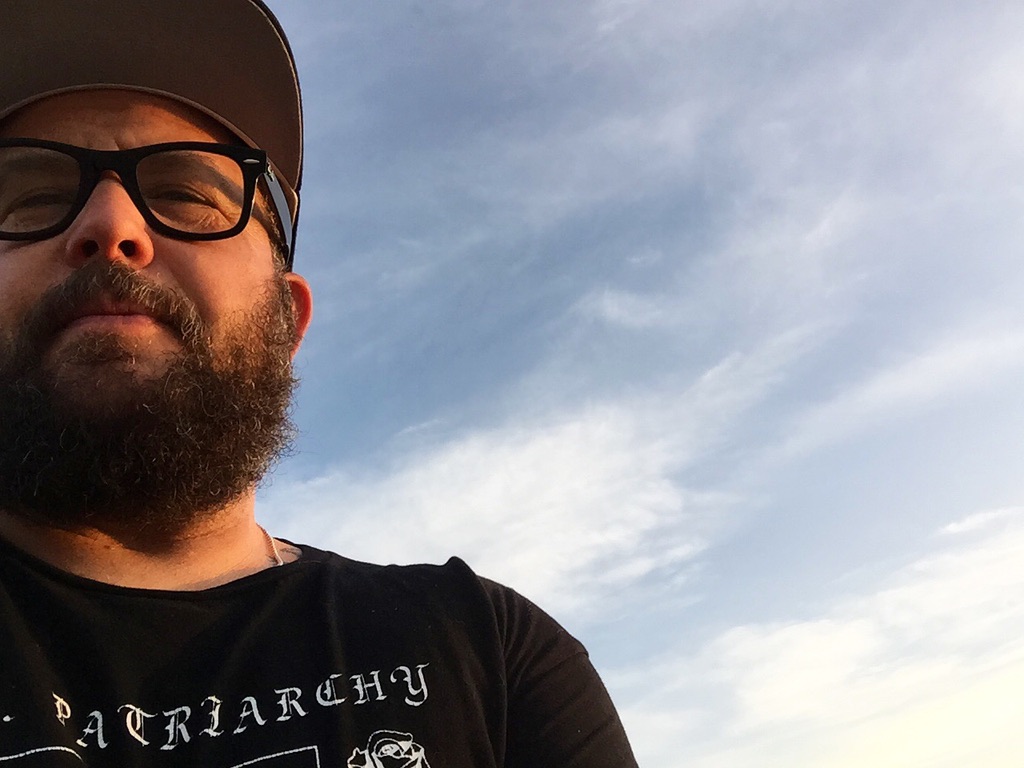 “But the future came, whether I was ready for it or not.”

That’s from the introduction of Cooper Lee Bombardier’s excellent new collection Pass With Care. It’s a book that charts the author’s life from a working-class Gen X childhood in Massachusetts to the onset of middle-age, with stops in San Francisco’s ‘90s dyke culture and New Mexico’s deserts along the way. It’s a reflection on generational changes of queer life, on two decades and change into life as a trans man, and it’s insightful and wise and touching.

“But the future came, whether I was ready for it or not.” Cooper’s talking about the course his young life took—conceiving of a future at all not being a given. Yet, of course, the line reverberates with acute-ness across years and generations of queers, and its salience is neon-bright in the age of COVID-19.

I chatted with Cooper about life as a trans writer, essay craftsmanship, intercommunity struggles, and how we’re all holding up.

Hey Cooper! How are you doing?

I’m mostly keeping it together, but I woke up at 3 am this morning with a near-panic fear of what if we never get to move outside freely again, or connect with our beloveds?

Ugh, I know.  I had a really bad time in that space around midday yesterday.

How did you move through it?

I think I focus on how it feels similar-ish to previous periods of despair and grief—not that those periods were caused by anything similar to what’s happening now, but like… I know there are times in my life I felt immobilized and like there was no future, and sometimes it shook out fine and sometimes it didn’t but the future happened anyway, and the future will happen here too.

Haha, I just thought: “Wait, that sounds like something Cooper wrote in the book.” and I tab over to the PDF and it’s right there: “But the future came, whether I was ready for it or not” Thanks for that. How about you?

I’ve picked back up working on a memoir I started before Pass With Care, writing about my life just prior to learning my lover was HIV positive, in January 1991. I’m noticing what is similar to this current moment for me, and what is very different.

Remembering how I survived other such moments of profound uncertainty, grief, despair, and fear, is helpful. Back then, I never expected I’d live through it. Now, I feel driven by a desire to live through it.

I like that. A desire to live through it.

Yeah, for sure. In January 1991 I don’t think I’d decided to stick around yet.

In the last essay of Pass With Care, you talk about “writing fearlessly,” specifically encouraging trans writers to do so. I think you wrote fearlessly in this book. “Splinters,” and “Pigeon Hunters” stuck out to me in particular, and especially “The Fourth Level,” about abuse accusations.

I’ve read a lot of stuff about how accountability dynamics in queer community can get busted. And I thought that essay was really willing to get deep into the shit and stay there and not come out until there was something concrete for me to take away. Which there was. Thanks for that.

I’m rallying myself above all else. It doesn’t mean that I or other trans writers will write without fear. Rather, I’m trying to get at the stories we want to tell, beyond trying to appeal to a non-trans gaze, where we get to be complicated, flawed, and in a process of evolving.

I felt terrified the entire time I worked on “The Fourth Level.” The first incarnations of “Splinters” and “Pigeon Hunters” came about quite some time ago and I have a lot more distance to them. But I was still trying to look under the hood at messy, complicated, and possibly ugly emotions and actions. I wrote “The Fourth Level” as the book was in process. I guess that saying that courage is about being afraid and doing things anyway rings true to me.

Another essay, “In This Dungeon, All Prisoners Are Free to Leave,” is about a past lover and it is so warm and sad and beautiful. I liked the device of dividing the past and present between alternating sections, “Here/Now” and “There/Then” that temporally weaves the story together. I would love to know how that essay developed.

It just spoke to me as needing to shuffle through time, to be told in layers. It came about mostly intuitively. I think shifting between the past and present of that relationship allowed it to not be looked at head on, which I think mirrors the connection itself in so many ways: both the narrator and the desired cannot bear much direct scrutiny.

In the final essay, you wrote:

The book I’m writing now is trying to capture an experience in my life before I consciously knew I was trans…I could rebrand myself as having been a ‘trans kid’ and this wouldn’t be a lie, but that language didn’t exist then, even though I did.

It seems like we’re constantly inventing new language in our work because so little of existing language works to describe our experiences, right? I’d hear anything more you want to tell me about this.

Sure! I am interested in wading into the ambivalence of my life prior to transition. But I reject the notion that I have to position my younger self on a binary construction of identity or a sense of conscious transness that was in no way available to me prior to the early 1990s.

Yes, from here I can imagine referring to “past me” as a trans kid, but when trying to write from within that time, that language did not exist. So, it is more interesting to me to allow the details, thoughts, actions, feelings illustrate that sense of being gendered (rightly or wrongly) at that time, to defamiliarize it somewhat, rather than to rely on the shorthand of whatever trans language or inter-community vernacular I have access to now.

Speaking of inter-community vernacular: In “Sharing Trans: Internet Transgender Discourses and the End of Gatekeeping,” you write on the social and medical changes of transitioning over the years. You wrote that essay in 2013. What’s it like for you to look at it in 2020?

The conversation in that piece stitches a thread through trans generations, and it speaks to our culture in that once we can even name a way we connect with technology, it is almost always already obsolete. The inciting incident I wrote of, about someone I hardly knew asking me to bear witness to their transition via Facebook and YouTube, is so par for the course now, right? Who doesn’t transition online now, at least in some part? I am by no means an authority on how social media impacts our lives. I was a bit older than my friends who came into trans community on LiveJournal and chat rooms. The way I found other trans people was in person, in public space.

To add to that, I think because I came of age as queer, as trans, and as an artist in physical, public space, I am really bugged out by online vitriol and the amount of intercommunity strife that I’ve witnessed. I came up really being dependent on community and understanding the inherent imperfection of community.

Intercommunity strife has been around forever (touched on in your book too) but I’m curious what differences you see online/offline, especially as it relates to, as you say, coming up being dependent on community and understanding its imperfections.

A lot of it might be generational. I also think social media makes us simultaneously over-exposed and inherently unknowable. We see pictures of a person’s most intimate space, their houseplants and their pets, or the meals that they make, and we think we know something about them. And of course, we know nothing. And when someone jabs at us online, it feels so intimate and personal, even though that person knows nothing about us, not really. It’s strange.

I also think that relationships we cultivate IRL have a bit more tensile strength in that our parasympathetic nervous systems work in conjunction with what another person says. It gives us context. And so, for example, if someone might not be using the precise language we feel most comfortable with, we have other clues to go on to try to understand.

This conversation has been lightly edited.