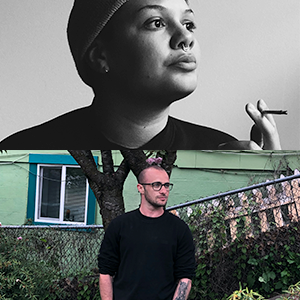 Lambda Literary is pleased to announce that Xandria Phillips and Calvin Gimpelevich have been named the winners of the 2020 Judith A. Markowitz Award for Emerging LGBTQ Writers.

The award recognizes LGBTQ-identified writers whose work demonstrates their strong potential for promising careers. Each award includes a cash prize of $1,000. The judges for this year’s prize were Hannah Ensor and Theodore Kerr.

In reading Xandria Phillips’s poems and hybrid texts, we wonder what it is “to partake in a gender, to fashion one’s self a living process of it.” Their work is rigorous, demanding, lush and luscious, complicated, full of aural and physical pleasures and all of the readerly implication involved in feeling those pleasures. Xandria Phillips has written some of my favorite poems; they are kaleidoscopic, shimmering, asking new things of their reader with each new return. Someday I hope we’ll all get to take Xandria’s courses – they are currently the First Wave Poetry Fellow at the University of Wisconsin-Madison, teaching “Liberation Poetics” and “Queering the Word.” Until then, we have their remarkable full-length collection, HULL, which Luiza Flynn-Goodlett described as “vast in both ambition and scope, striving to capture the depths and complexity of queer diasporic African identity in verse that is as fierce as it is tender and searing as it is celebratory.” And soon, I imagine, we’ll be reading their manuscript in progress, Presenting as Blue / Aspiring to Green, which elegantly explores gender alongside color alongside performance-of-self alongside “a constant hunt for stimulation and texture.”

Phillips’s collection HULL is also a finalist for the 2020 Lambda Literary Award in Transgender Poetry.

Calvin Gimpelevich is a writer and organizer who lives in the Pacific Northwest. In short stories like “Las Vegas,” “You Wouldn’t Have Known About Me,” and “Wolves” he brings to life working class experiences across the US, through the lives of queer and queer-adjacent people, a reminder to me as a gay cis dude in my shared Brooklyn apartment, that most of us do not live in LGBTQ enclaves. Within his work, I am drawn into Calvin’s attention to trans experiences through the lens of economics, and community, making space for the complexity between surviving and thriving to emerge. In addition to his writing, what I found inspiring about Calvin was that his community commitments and excellence extends the page. He is a founding member of the Lion’s Main Art Collective for Queer and Trans Artists, and he is the recipient of awards from Artist Trust, in addition to residencies through CODEX/Writer’s Block. His short story collection, Invasions, was a finalist for the Lambda Literary Award.

Xandria Phillips (left) is a poet and visual artist from rural Ohio. Xandria has received fellowships from Oberlin College, Cave Canem, Callaloo, and the Wisconsin Institute for Creative Writing, where they are the First Wave Poetry Fellow. Their poetry has been featured in American Poetry Review, Black Warrior Review, Crazyhorse, Poets.Org, Virginia Quarterly Review, and elsewhere. Their first book, HULL, was published by Nightboat Books in 2019.

Calvin Gimpelevich (right) is the author of the short story collection Invasions. His work has been recognized by Artist Trust, Jack Straw Cultural Center, 4Culture, CODEX/Writer’s Block, the Kimmel Harding Nelson Center, and Lambda Literary. A founding member of the Lion’s Main Art Collective for Queer and Trans Artists, Calvin has organized readings and art shows at venues throughout the Pacific Northwest. He is currently at work on a novel.