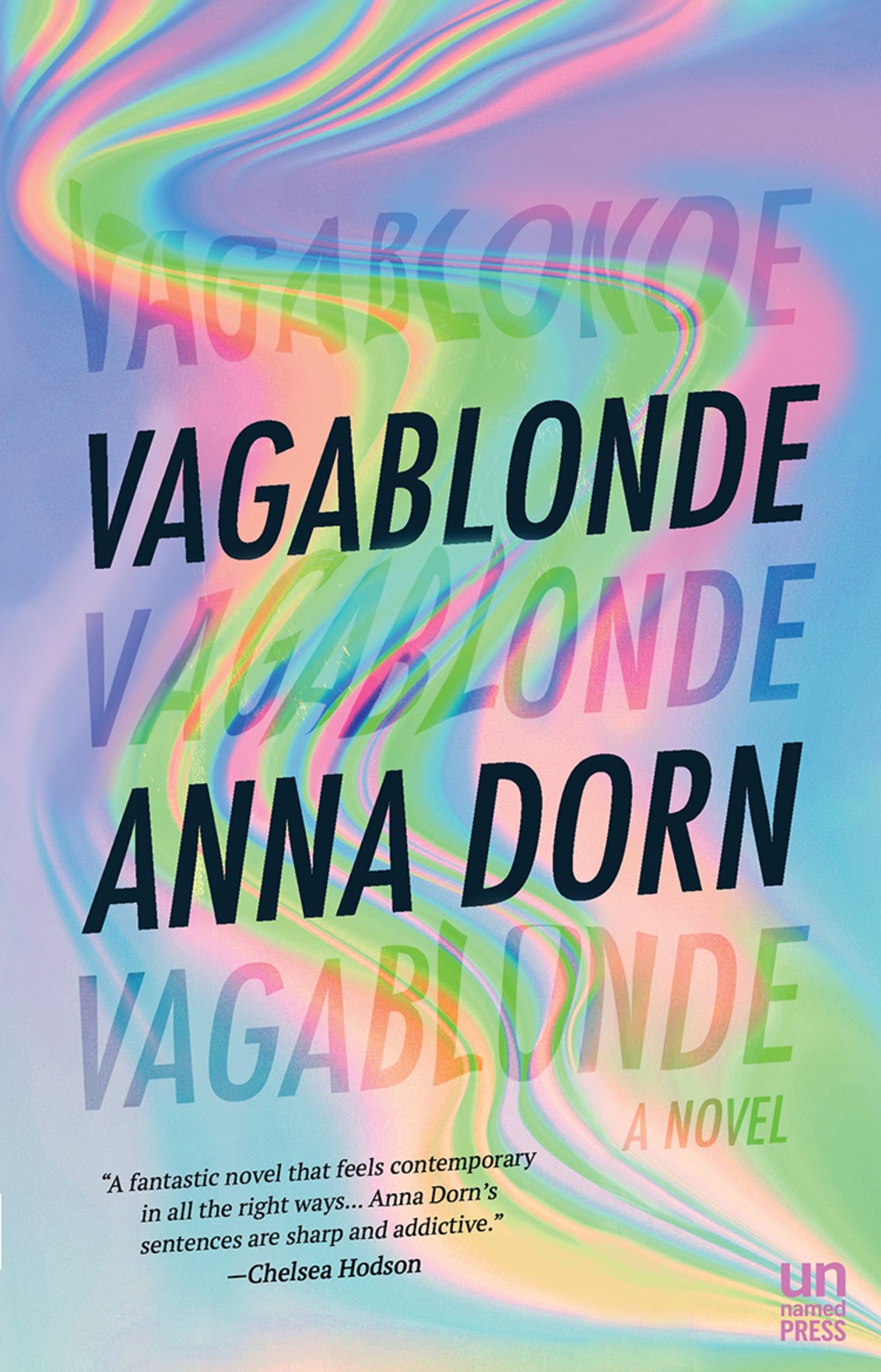 “I’m still clinging to the memory of those twinks on Sunset telling me I was beautiful as I stare at my reflection in the mirrors above the pharmacy section of Walgreens,” begins Anna Dorn’s first novel, bringing harsh fluorescent lights up on an entire world and worldview. Prue Van Teesen—stage name Vagablonde—is a misanthrope who’s desperate to be looked at, perpetually mugging for a nonexistent camera and biding her time in an unglamorous law job until either her rap career takes off or her inheritance comes in. Her favorite band is fronted by a former reality TV star, and she prepares for a night on the town by doing lines off a Mary Kate and Ashley Olsen coffee-table book.

Offscreen reality is doomed to disappoint. Instead of standing up to her parents—who jet in from WASP central casting to scold their daughter on the way to various tropical destinations—Prue rants at pharmacists and gives Lyft drivers two stars for “bad attitude.” She’s on SSRIs for a panic disorder, but worries: “What if I have some amazing personality or hidden creative genius that’s being suppressed?”

Must be pretty far suppressed, some readers may think. So what makes Prue tolerable company for 300 pages? There are her artistic aspirations, her way with a one-liner, her queerness. Dorn adeptly mines the unique cultural territory of being a Hollywood-adjacent young queer woman in the early 21st century. Prue recalls getting her first girlfriend “around the time Lindsay Lohan was dating Samantha Ronson, and I think that was pretty much the only thing that gave me the courage to do it.” She’s hesitant to label herself bisexual but identifies half-seriously as an “amphetimine feminist,” theorizing, “Downers keep women passive and in the home, unable to do anything but vacuum rugs and suck dick. Uppers make women participate in the marketplace.”

In her aggressive self-absorption, Prue could be a cousin to other recent delusional and self-destructive narrators—Patty Yumi Cottrell’s Sorry to Disrupt the Peace and Halle Butler’s The New Me come to mind—except that Prue’s various privileges may actually put her grandiose dreams within reach. Her music-industry girlfriend connects her with the flamboyant producer Jax Jameson, who sees Prue as the perfect ingenue to complete his crew of musicians and hangers-on. It’s the break Prue has been waiting for, even if she has reservations about Jax’s penchant for group hugs and hard drugs. And it doesn’t hurt that the circle includes a cute music journalist named Nina, who strikes up a flirtation just as Prue’s girlfriend disappears on an extended business trip.

Then gold-toothed, faux-British Yumiko (née Rachel Taften) bursts out of Prue’s case files into her reality. Having found her court-appointed lawyer’s SoundCloud page, Yumiko insinuates herself into the band in short order. As blonde and attention-hungry as Prue, she could be an evil twin—or perhaps the real version of a persona Prue is only trying on. When Yumiko freaks out her new friends by packing heat at a party, she explains, “I thought you all would be into it honestly. You blast ‘Paper Planes’ like every night.”

Yumiko’s mistake is imagining that these people have any use for authenticity. As Vagablonde, Prue steps into a musical lineage stretching from Kreayshawn to Lana Del Ray. Her Kanye-obsessed crowd appears to include no black people, and when she’s feeling depleted by constant partying, she recharges with an Afro-Caribbean dance class taught and attended entirely by white women. These ironies don’t escape Prue’s eye, and certainly not Dorn’s—but neither is there any sense that Prue or the wider world might benefit from a deeper acquaintance with each other.

Dorn is herself a blonde, Kardashian-tracking law grad (with a forthcoming memoir, Bad Lawyer) and D.C.-to-L.A. transplant who has written about her experiences with anxiety, among other attributes she shares with her protagonist. There’s a kind of bravery in attaching so many autobiographical elements to such a deliberately alienating character. Though the dialogue can be pitchy, her prose is well attuned to Prue’s outlook: a wry flatness lacerated by flashes of unwelcome insight. Prue may drift far from reality, but Dorn’s descriptions stay grounded. Who hasn’t known what it’s like to “wake up feeling like a foot. Sweaty, hot, swollen” after a night of drinking?

As Prue’s life becomes increasingly fragmented by fame and blackouts, the narrative occasionally seems to lose its memory, too: Nina calls out Prue’s job as a defense attorney in a piece for Pitchfork but later expresses surprise that she’s a practicing lawyer, for instance. Still, such blips scarcely disrupt Vagablonde’s sheer consumability, its pages scrolling by like so many miles of Instagram feed. Vagablonde should be an ideal feel-bad read for the summer of 2020. Swig it down beside an empty swimming pool.