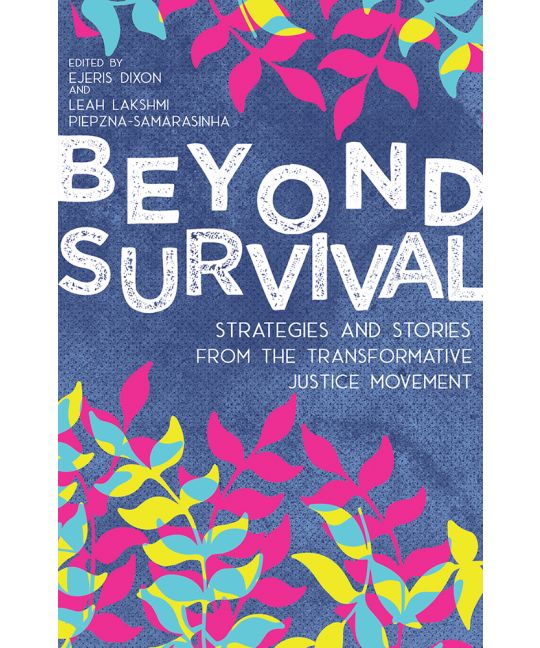 The Jeanne Córdova Prize for Lesbian/Queer Nonfiction, awarded in memory of the beloved activist and author, honors lesbian/queer-identified women and trans/gender non-conforming nonfiction authors committed to capturing the depth and complexity of lesbian/queer life, culture, and/or history. One prize is awarded annually.

2020 Córdova Prize Winner Leah Lakshmi Piepzna-Samarasinha is a queer disabled femme writer, cultural worker, and educator of Burgher/Tamil Sri Lankan and Irish/Roma ascent. They are the author of ​Care Work: Dreaming Disability Justice, Dirty River: A Queer Femme of Color Dreaming Her Way Home (​short-listed for the Lambda and Publishing Triangle Awards, ALA Above the Rainbow List), ​Bodymap ​(shortlisted for the Publishing Triangle Award), ​Love Cake ​(Lambda Literary Award winner), and ​Consensual Genocide​, and co-editor of ​The​ ​Revolution Starts At Home: Confronting Intimate Violence in Activist Communities. Their latest book, ​Beyond Survival: Stories and Strategies From the Transformative Justice Movement (co-edited with Ejeris Dixon​) ​was published in January. A lead artist with Sins Invalid, her writing has been widely published, with recent work in PBS Newshour, Poets.org’s Poetry and the Body folio, ​The Deaf Poets Society, Bitch, Self, TruthOut​ and ​The Body is Not an Apology.​ She is a VONA Fellow and holds an MFA from Mills College. She is also a rust belt poet, a Sri Lankan with a white mom, a femme over 40, a grassroots intellectual, a survivor who is hard to kill.

Oh yeah. I came up in the 80s and 90s and I had the library, and I also worked shipping and receiving when I was sixteen in the basement of one of the two indie booksellers in Worcester, and because we were getting $4.25/hour minimum wage and an unpaid lunch break—and also because this was supposed to be an indie bookstore, but the head buyer would literally refuse to shelve books people ordered if they weren’t “family friendly”—we all had a very intense theft ring going. I stole hundreds of dollars of books from the returns, as did all of us. I got my first copy of Macho Sluts from there! In the library and also at the Borders in Framingham (where I also shoplifted), there were the early 90s queer intensity survivor books. Bastard out of Carolina and Trash were both really important to me. Sapphire’s books, American Dreams and then Push when it came out. All of Chrystos’ poetry. The collection Critical Condition: Women on the Edge of Violence. June Jordan’s poetry, and Audre Lorde’s. This Bridge Called My Back was critically important: it showed you that you could write as a queer woman of color in a way that was alive, a letter at the kitchen table. Marge Piercy wrote these big, almost Victorian scale novels that were really grounded in working class, often queer, often non-white, women’s lives. It was kind of all Intensity Abuse Survivors Books and second wave queer feminism of color, plus zines. A lot of early queer BIPOC riot grrl and punk zines, like Bamboo Girl and Mimi Nguyen and Helen Luu and Billie Rain’s work, were incredibly important to me. They showed me you could write stuff down and not wait to get published by a press, but just xerox your thoughts and mail them and have a huge audience.

I have a disabled writing life. People say I’m really productive, but I do a hell of a lot of other shit besides writing—gigs, teaching, speaking, writing coaching, organizing. And,  faffing about the house, growing food and regular disability life stuff, like the couch and watching massive quantities of online television while icing my joints. My brain sometimes tends to go towards this work first, because its more concrete and immediate and deadlined. Especially during the pandemic, it’s been tough getting myself to write because my brain wants to do work that will a) pay money, b) involve other people. Also, my brain feels like sludge due to isolation and mass fear, because, as many people have said, a global pandemic is not a writer’s retreat.

But, having said all that, right now I tend to wake up, go make a cup of tea and do the dishes, and then get back in bed and start making notes, checking FB and working through tasks—and writing. Stuff comes to me and I make room for it. Early is better.  A lot of my writing happens in a disabled way, because it comes when “nothing is happening” and I get an idea. I have to lay a trap for it, which is the sick life. I also have things I need to do, that have gotten easier to access as I’ve gotten older and am less financially desperate and more able to say what I need—like, turning off my phone and getting the writing done first. Before the pandemic, I got a lot of writing done at my “secret office,” which is my favorite carrel at the library of the state college where my partner goes to school—I walk in with my shit and just look like another middle aged mixed race punk. I have a desk in my bedroom, but it mostly exists to hold piles of crap; most of my writing happens in bed or at the kitchen table. I came up in a literary tradition that was about serving the people/the community, and that’s still there—a lot of my best ideas or pieces start as Facebook or other online comments or posts, and then I go from there.

Are there other lesbian/queer nonfiction writers working today whose work you particularly admire?

I’m a nerd and I’m always drawn to queer and trans sci fi for its world building, wit, and visions of the future. I read Annalee Newitz’s The Future of Another Timeline this past week and I really loved and appreciated it, because it showed queer and trans time travelers altering the future and the past, and the effect our small queer choices can make. All the stuff my disabled friends write, most of which is online and some of which is in angry or laugh/crying text messages. Ursula LeGuin, always. Octavia reminds me that she knew exactly how bad it was going to get and that horrible things would happen, and yet there are still choices and agency, and some people will survive, albeit not unscarred. As the kid of someone with polio, I haven’t re-read it recently, but Anne Finger’s Elegy for a Disease is an important queer polio memoir, and reminds me of pandemics and the disability politics of them of the past. M Téllez’s All That’s Left series and their other spec fic and erotic writing is also always great; I very much appreciate their crip, Latinx, poor, trans, rust belt writing about the future present.

Good question. Right now I’m in a weird in-between stage because I just wrote or co-wrote or co-edited four books in two years. I’m not complaining, but I am a little now what. Before the pandemic, I was working on a small zine about my estranged abusive parents dying, which is kind of turning into a book, I think. I’ve also been working in spurts on a sequel-ish thing to Dirty River that attempts to tell the story of me coming back to the US in 2007 just in time for the birth of disability justice and a lot of really wild QTBIPOC times in Oakland in the 2010s. And I have a very early book that is looking at where transformative and disability justice comes together. And I wrote the script for an issue of Gabby Rivera’s bb free comic. So I guess despite feeling like all I do is cook beans, I have another four things on the go, as per fucking usual.

Also, survival, both my own and our collective survival, is hopefully what’s next. Which is at the mercy of fascists who want us to die, our own small bold queer and trans daily choices, and completely unpredictable, wild shit.

Click here for more information about the award and Jeanne Córdova.