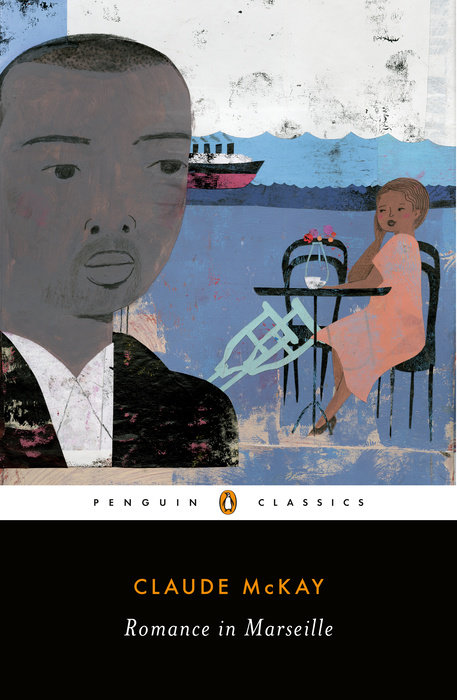 Zany and full of sudden twists, Claude McKay’s Romance in Marseille charts the misadventures of an eclectic bunch of social outcasts. Set in the port of Marseille at the height of the Jazz Age, the fast-paced picaresque story follows the African-born, legless Lafala as he brushes shoulders with idlers, communists, and queer folk while pursuing the love of Aslima, a Moroccan prostitute closely surveilled by her pimp. Written in the 1930s and now released for the first time, the novel, in three acts, gleefully rejects subtlety at every turn, with lurid episodes of conflict, sex, and betrayal piling atop each other and crescendoing toward an unforgettable end.

The first act opens in a New York hospital with Lafala recuperating from the recent loss of his legs. Weeks earlier in Marseille, Aslima, the protagonist’s long-time love interest, robbed and ditched him on a whim. Humiliated, he fled the sunny city of Marseille for New York as a stowaway aboard a ship, whose crew promptly lock him in the ship’s icy water closet. His legs are damaged by the bitter cold; upon landing in America, doctors amputate them and replaced them with a pair of wobbly wooden pegs. All this is recounted in a few paragraphs, swiftly setting the plot’s dizzying pace.

Luckily enough for Lafala, a Jewish lawyer instantly pops up in the hospital, in one of the occasional cringe scenes that date the novel. The lawyer claims affinity with Lafala over facing ethnic and racial prejudice, and readily offers to help him sue the gentile company owning the ship, in exchange for half of the settlement. Lafala agrees and, after handily winning the case, returns newly rich to Marseille, determined to find respect and love.

From there Lafala’s fraught quest to buy back Aslima’s affection takes center stage. Once reunited the pair wave away the past and parade around the port flaunting their wealth, with which they hope to buy an African estate and ditch Europe, along with their working-class pasts. They party nightly, and champagne flows freely. Despite all the glitz Lafala privately frets about whether or not Aslima will betray him again. He swings from trust to doubt; she has a penchant for sudden disappearances, he reasons, and stays in close touch with her pimp Titin. Readers learn early on from Aslima’s solo scenes with Titin that she’s faithful, but Lafala’s paranoia holds the romance’s fate in suspense until the final pages.

Meanwhile, the couple’s excess attracts a great deal of envy and admiration in Marseille’s underworld; friends and foes alike fixate on their newfound affluence. Lafala reconnects with his old gang of pansexual male friends, and a biracial intellectual tries to instill class consciousness in him, introducing him to a world of dockworkers and communists. All the while Titin hounds him, demanding he pay for the time he’s spending with Aslima, who insists the protagonist owes nothing. Her rival, fellow sex worker, and lesbian, La Fleur, immediately notices her enemy’s change in fortune and launches a baroque bid to steal Lafala’s love and money, despite her lack of romantic interest in men.

So much happens so quickly. Subplots rise and crash to a close in the span of pages, while Lafala and Aslima speed around Marseille, reveling in luxury and fantasizing about starting life anew in Africa. All this makes for a dazzling, frenetic story, which ultimately collapses in tragedy.

‘A Pornographer’ by Arch Brown
‘The End of Your Life Book Club’ by Will Schwalbe
‘False Bingo: Stories’ by Jac Jemc