Middle School’s a Drag, You Better Werk! is a Celebration of Bravery

Middle School’s a Drag, You Better Werk! is a Celebration of Bravery 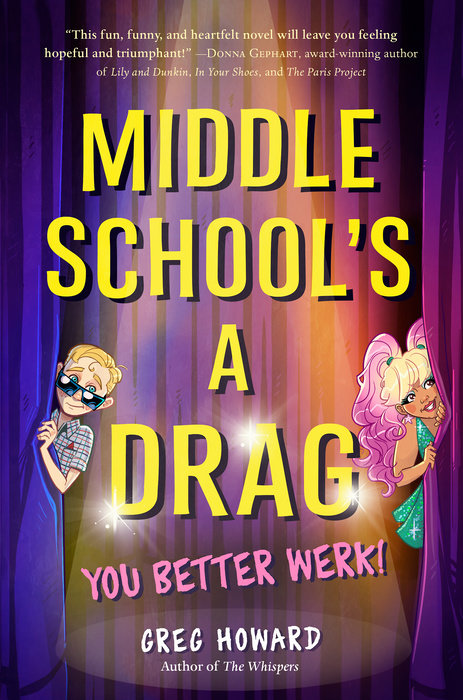 Can someone’s bravery be infectious? If so, what does it mean to make sure budding bravery doesn’t overshadow a role model’s journey? These are the questions Greg Howard wraps his twelve-year-old protagonist Mikey with in Middle School’s a Drag, You Better Werk!

The lovely shape of this novel, as is true with Dana Alison Levy’s It Wasn’t Me or Bill Konigsberg’s The Music of What Happens, guides from a story-home location out to adventures and back again, as if inviting the reader to trace the petals of a daisy, chapter by chapter. For Levy, home was a classroom; for Konigsberg, a food truck. For Howard, it’s Mikey’s family carport, the headquarters of Anything, Inc., a child entrepreneur’s think tank. It is in this home the reader discovers Mikey busy believing that his importance will be divined alone while attempting to heed the call of commerce. Perhaps the only thing more important to Mikey than commercial success is making his grandfather, the lifelong entrepreneur Pap Pruitt, proud. So far, though, neighborhood croquet lessons have not led to a burgeoning sports empire, and a cardboard-walled convenience store has run afoul of a storm.

Mikey’s first twinkling of true success arrives in the form of Julian Vasquez, also known as kid drag queen Coco Caliente, Mistress of Madness and Mayhem. Julian snaps the story alive with a request for Mikey to become his talent manager. This is where the world, out where dreams actually shake, shatter, and thrive, all among people, starts to tug on Mikey, though such notions start subtly. Mikey is too excited for the potential big bucks of talent management for self-reflection to reign just yet.

Mikey gets a hint that a new role model has arrived in the form of flamboyant eighth grader Julian in a poignant scene in the school cafeteria. Mikey and his two best friends eat, as usual, in the not-popular-but-not-unpopular zone. Julian, who is definitely of the unpopular zone, stops by, expecting to interact with his new manager. Mikey’s best friends gape, and Mikey wonders if he’s ashamed of Julian and himself, also gay, but only out at home, not school.

As Mikey sees business potential beyond Julian, he juggles into life a broader opportunity: running a kid talent agency for many blooming stars. The kid acts anchor Mikey’s enterprise in reality, especially as they prepare for the school talent show. In tow, their family, enemies, and friends knit people together: Julian’s friend Colton is a crush Mikey may want to be out for. Julian’s parents offer a contrast is how a flamboyant child receives support. School bully Tommy loves to draw and may not get that he actually hurts people.

When Mikey embraces Julian as a role model, he begins to soar. He connects more with others, he spends less time in the carport alone. But Julian points out that he doesn’t get shoved aside just because Mikey is having an awakening. Wonderfully, Mikey’s response culminates in him acting as a literal back-up dancer for Julian, thereby honoring knowledge and bravery in the spotlight. Through Julian and Mikey, Howard also reminds that real-world kids know perfectly well they’re gay or feminine-presenting without ever having proven those things to other people. Here, by the time the reader sees Julian in talent-show drag, they’re cheering, not shocked. When Mikey’s cheek buzzes from a sweet kiss, it doesn’t make him gay; it gives the reader something to snap for.

In contemporary middle-school narratives, the writer must choose phrases and awareness-of-difference that rings authentic to the complexity of the hero yet honors the identities of those depicted. A great example in contrast is found in Mikey’s awareness of ableism. On one hand, he champions those with physical and mental traits that he isn’t used to, such as how he wants to know Colton’s mom without judging her health struggles. On the other hand, Mikey quite often short-hands situations as “crazy” and less often as “lame,” never thinking twice about these loaded terms.

For pages and pages, Mikey thinks Pap Pruitt will be proud of the potential for moneymaking, but ultimately it is the discovery of self and the allowance of uplifting others that catches the lump in the throat. Mikey learns that while it’s good to be inspired by a friend that his own journey shouldn’t shut out the other person’s shine. As is in real life, when someone is attempting to include others, that person learns how different inviting or managing or taking from others is from actually including and honoring them. Mikey shows that when people give proper due to each other, they learn and celebrate together, and maybe even heal.