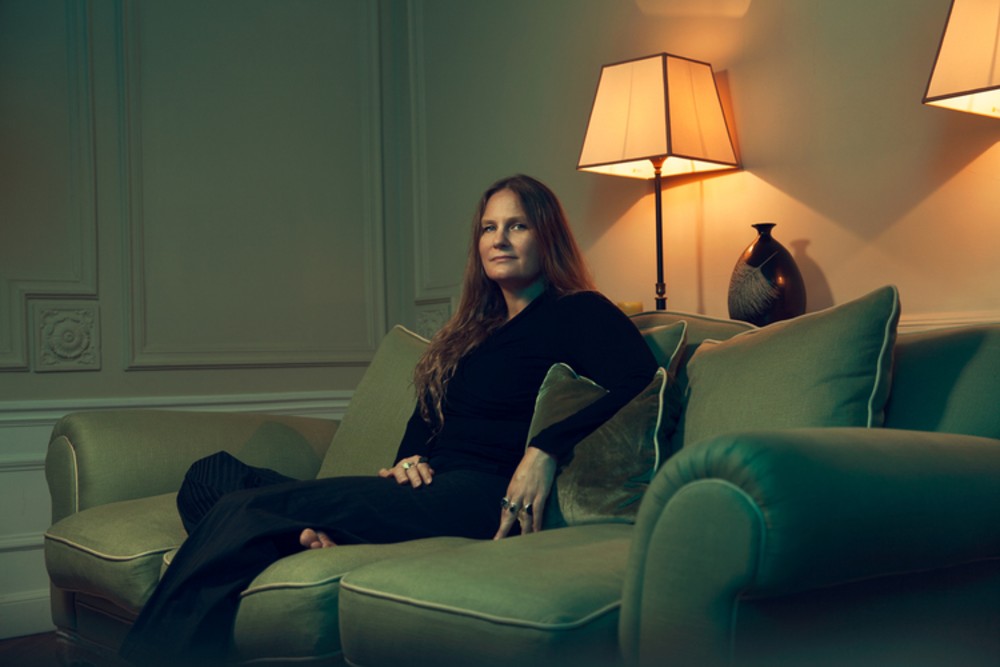 Several minutes after buzzing her into my apartment building, I found the author Lidia Yuknavitch roaming a stairway uneasy about which door to go through. “All of the doors say fire!” she said, pointing at the door I came out of that read: FIRE DOOR. We both stood there laughing.

Yuknavitch’s new book, Verge, is a fiery conflagration of ideas and style and the latest in a series of works from the author that aims to explode metaphors of language, time, and the human body. Yuknavitch is author of the novels The Book of Joan, The Small Backs of Children, Dora: A Headcase, the widely acclaimed memoir, The Chronology of Water, the multi-voice nonfiction book, The Misfit’s Manifesto, and a critical book on war and narrative, Allegories of Violence. She also founded the Corporeal Writing workshop series in Portland, Oregon.

Over a coconut ginger turnip stew and some bubbly water, we talked about her new story collection, queer vanguards, and our capacities to locate identity in the places and placements of bodies.

In some of the reviews and blurbs for Verge, and even with your other books, people often describe your work using language like “grotesque” or “volatile” or that suggest the stories are about characters “in disaster.” But none of these words or ideas ever pop into my head when I engage with your work. Do you wonder if some of the people trying to put conversations together about the art you’re creating are in denial about the violence that exists within five feet of us at all times?

I guess the answer is sort of yes, isn’t it? Because I don’t think those words either when I’m making it. Maybe some of it is fear? Like if you had to go around admitting you see everything that’s in the stories of Verge all the time, and if you had to look at those characters and what they’re doing all the time, I can imagine that it’s scary to some people. But it has been my life; therefore, not scary.

….And for people who’ve touched the difficult or intense or contradictory places in life? I don’t think they would use those words either.

I don’t have a problem with anyone describing a story with certain words; what I wonder about is why certain words are chosen to describe a collection of stories. In many queer spaces, the stuff your stories are getting at isn’t grotesque or scary. It’s life.

That’s what I mean. Having worked in a hospice, or pulling a dead father out of the ocean and resuscitating him, or holding my daughter the day she was born and died. My definitions of things happening are in relation to those bodies. So grotesque is not a word I would use. But our denial is so thick about the world we’ve actually made, and we’re pointing at it like someone else did it. Maybe that’s why some of those descriptors feel so odd to me.

I don’t think we give people the choice.

No. No! We’ve been trained to be citizens of consumerism and citizens of the state to help the state, and now the state’s blown up in our face…. But what do we expect? We bought it.

There are a lot of hands in this book. A woman’s hand is severed. A woman dreams of running with her hands. A woman massages a kidney with her hands. A girl runs toward a summer with no hands. Can you tell me about what’s up with the hands?

I love you for noticing them. There’s a Lidia answer about hands and then there’s playing with it on the page and representationally. The Lidia part is I’ve never quite figured people out or how to act like them, but some people seem—from afar—to find identity in their faces a lot. You can check this out with my family, but I can’t even look in the mirror to brush my teeth. I don’t find identity in my face, and I don’t feel the confidence of being an individual named Lidia in my face. So when you turn the question a little bit and go, “Okay, let’s say you don’t find it in your face, where do you find it, weirdo?” It’s in my hands; not to get too Guillermo del Toro.

And because that’s profoundly true for me, I wanted to put that into signification because I can’t be the only person on the planet who feels things like that. Like maybe a dancer feels it somewhere different in their body. Or a construction worker. Or a nurse. Where do you really feel your identity is a great question. It’s a bit of a corporeal question, too, so, that’s handy.

In the stories you mentioned, it’s often women or girls, and I’m trying to move the signification of identity around the body tied to, as closely as possible, the material conditions each of them find themselves in. What’s their labor and how has that formed their identity? Are they trying to save themselves in a life or death situation, and how is that in their identity? If there’s one on top of a building standing there on the edge naked, how are the building and her nakedness—and what she can see from that point of view—part of her identity?

What do you see as some of the major barriers preventing queer artists from succeeding?

Partly it really is an economic inscription of the writer that keeps some stories and bodies legitimized and selling, and not others. There is such a narrow squeeze, and not in a good way, on what stories sell from the economic realm of making a book in the world.

The other piece is a sort of social organization that has not been displaced (yet) that puts white male, Christian-ish humans in the position of power, and any story from any body that doesn’t serve the top of the hierarchy is treated as threat or not in service of the state that we’re trying to make.

And so for me, a lot of times that means trying to help people who are daring to tell a story feel like they can do it.

That’s part of why I think stories are so critical because when a story can move that thing in you, all it takes is one.

And then that one shift in one person—now they’re shifted. It’s that butterfly effect. It’s that quantum idea of “it’s all very there and connected.” But I still wrestle with the barriers put in place so that we can’t access this or that particular story.

As a species we may have already wiped ourselves out, and nobody likes to say the sentence out loud cause it’s really depressing, but that’s not a reason to pull back.

Indigenous cultures, trees, mountains, oceans—they’re all here to remind us every day of our lives that we’re a puny part of the story. The stories started before us and they’re going to go on after us.

Are there any queer writers, artists, or what have you—past or present—that you wish were in more minds?

Yeah. Raymond Luczak. He writes about queer sexuality very explicitly and bear culture. He wrote a book based on Djuna Barnes’ Nightwood except it’s called Flannelwood. I love going to his readings. I wish he was more amplified—he’s got some strikingly amazing ideas going on.

There’s a whole lineage of women writers that I think got derailed in terms of the broader conversation and discourse, like Gloria Anzaldúa and Cherríe Moraga. If I could make the lineage over again, I would have them placed differently. If you took a woman’s studies class you ran into them, or if you took a Chicano literature class you ran into them. They were telling us things about border culture and queer identity—right where we’re at.

Maybe we should shut up and sit down and get out of the way because they’re doing it. There’s a time to be the one who steps out of the way.

What question would you like to be asked? What do you not get asked that you wish people would ask?

I don’t know how to answer that because the shapes of my writing is so boundaryless in terms of both my life and my imagination that it’s already in the art.

My whole artistic practice is inventing questions for myself that are impossible, and if it’s too easy, I’ll quit. Like I won’t finish the story or the book or whatever. It has to be impossible.

I wish more of us were making art about and talking about de-hierarchizing existence because you can find where people are having that conversation, but it’s kind of in a pocket, and that bums me out. I wish we were all asking each other more about that and devoting our art toward that. Can I say that?

This interview had been edited for clarity

Francine Prose: On Her New Historical Novel, Exploring the Psyches of Nazi Collaborators, and Examin...
Clara Bradbury-Rance on Lesbian Visibility and Representation in Film
Writer Clayton Delery on Reconstructing a Hate Crime

Adam Swanson is a writer and a 2018 Lambda Literary Fellow. He is the Senior Prevention Specialist at the Suicide Prevention Resource Center.