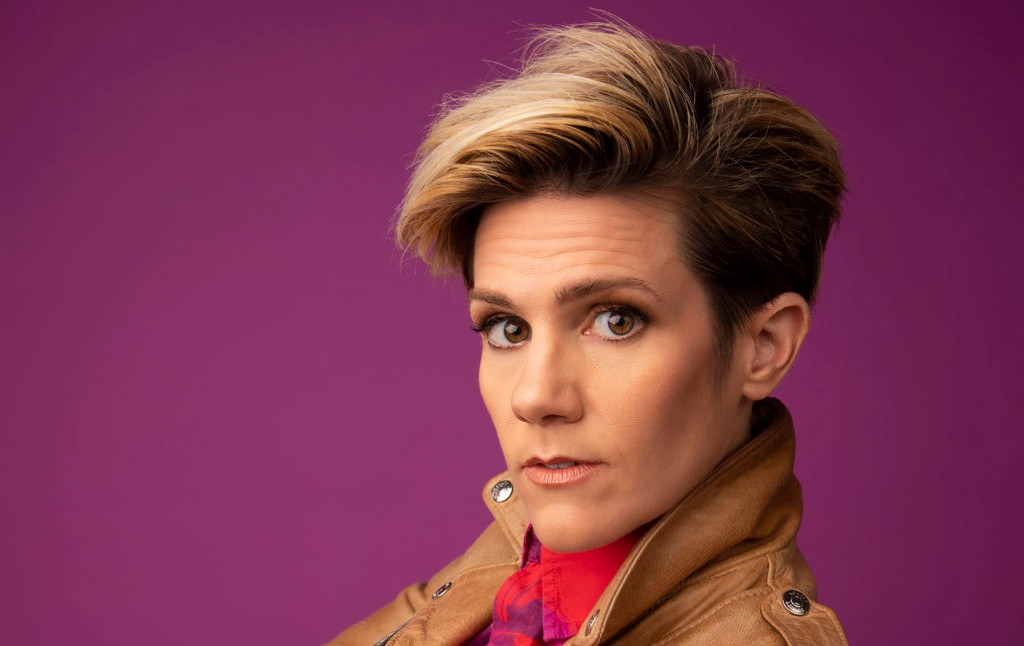 Cameron Esposito on Loving Her Younger Goofy Self

Cameron Esposito on Loving Her Younger Goofy Self 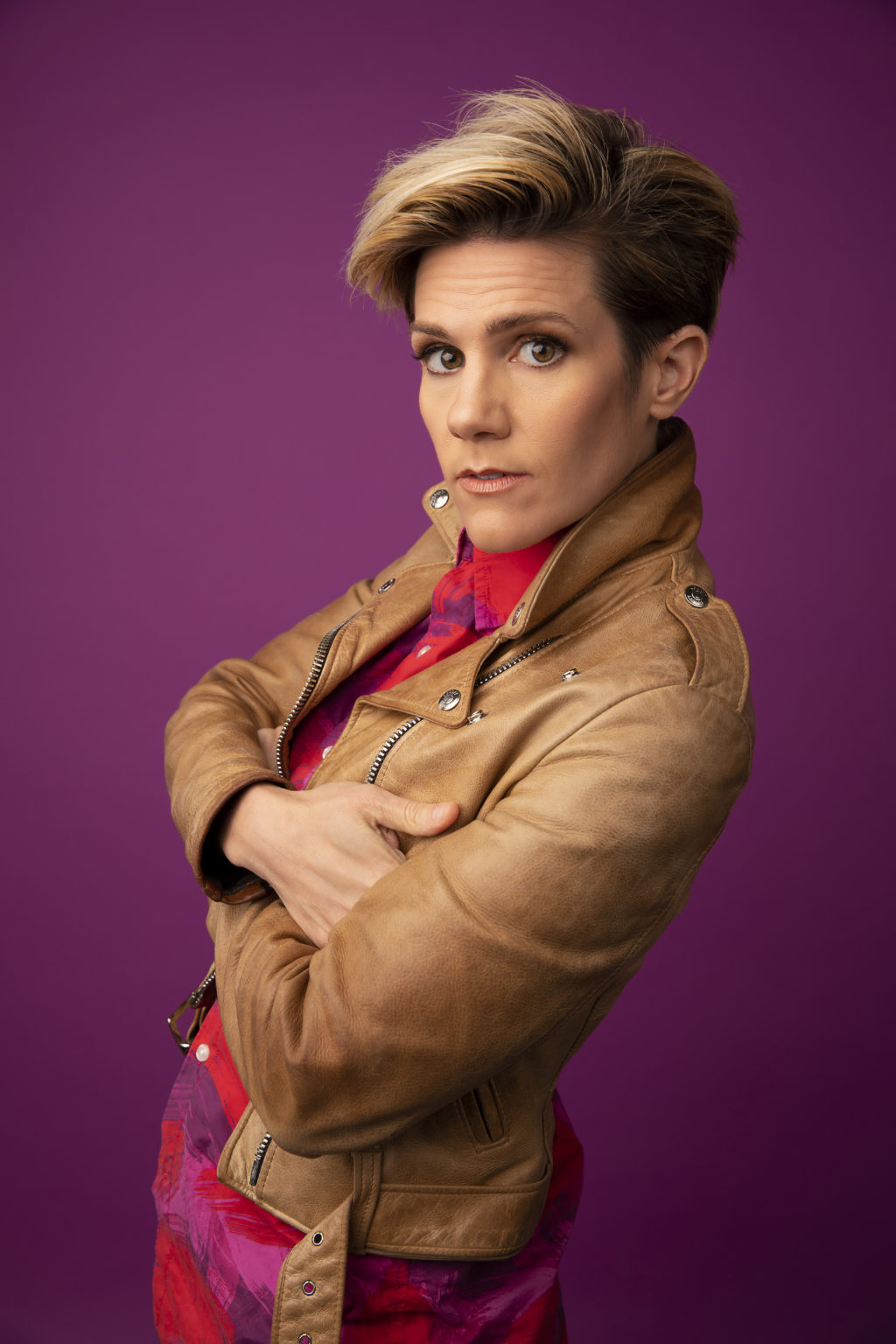 Cameron Esposito was going to find a microphone one way or another. While her original plan was being at the pulpit, she instead eventually found her way to the stage. Best-known for being a stand-up comedian, she is also a showrunner, an actor, a voice-over artist, a columnist, a frequent podcast guest and a podcast host. With Save Yourself, she adds another role: author of a memoir.

Although Cameron Esposito often discusses her life on stage, in her memoir she goes into more detail about it on the page. She details her Catholic upbringing and falling out of that faith in college, her complicated coming out, the realization that stand-up was her calling and helping other women realize their stand-up dreams as well. It’s a journey of self-re-discovery and tapping into a weird kid attitude. It’s a story that involves improv, a circus troupe, an eyepatch and, most importantly, a Garfield costume.

Lambda Literary was able to speak with Cameron about the book, the importance of queer peers interviewing each other, reconnecting with her younger self and what the name of her third book will be.

In doing research for this interview, I noticed that we both share an interview subject, Adam Rippon, and that you interview a lot of amazing people for the podcast Queery. What’s it like switching from the interviewer role to being the interviewee?

I’m actually much more comfortable and used to being on this side of things, being asked questions, because my job as a standup comic, I’ve been doing a lot longer.

A couple of years ago, and maybe this is exactly the right type of publication to speak with about this, I realized that most interview podcasts or even NPR shows were hosted by straight folks. A lot of the questions that referenced my identity were focused on just my coming out story.

I know as a queer person that queerness is a daily lived experience that intersects and impacts every part of your life. It was my goal to create a project where we can talk about the queer experience, and include childhood and any discussion about coming out, but also what it’s like having a job, what it’s like trying to find an outfit to wear to that job, what is it’s like being in a certain industry, and maybe being atypical to that industry. I just wanted to create a larger record of what queer life is like on a daily basis.

Yeah, you mentioned in the introduction to your memoir that the book is not the typical narrative that is imagined for queer people. It’s not just, “We’re a person, and then we come out, and then we’re a glorious Thundercat.” You showcase–I apologize for this metaphor–the puberty of coming out, the weird figuring out stage.

Can you talk a bit more how important it was to push against the tropes that didn’t really reflect your own experience?

Absolutely, I think I have two things to talk about there. One is a lot of straight folks, when I talk to them about the narrtive that this book centers, which is: being really Catholic, coming out at a university, or realizing who I was at a university where I couldn’t publicly come out, and being rejected by my faith, community, and family initially, they will be surprised. They will think this narrative is from the past. They’ll are like, “Wait, I don’t understand, this is from now?”

Also, most of us have a delayed experience of adulthood and of understanding ourselves. So, however you phrase it, we should acknowledge that….

What was the impetus behind writing the memoir?

It’s kind of an unusual story because the original editor who purchased the book found me, because of a column I was writing at the time for the A.V. Club and also because of a series of videos I was doing at the time with BuzzFeed called “Ask a Lesbian.” She approached me asking if I’d like to write a book. I think it’s one experience I’ve had multiple times in my career, for whatever reason, is that I’m usually doing a lot of things at the same time and so I sometimes get an offer to turn the art I’m working on into a larger project and with this book, I didn’t really know how to do that.

I said yes, because I love to read and have always loved to read. I then realized that writing a book is extremely difficult.

For Queery, since you interview a lot of writers and comedians who’ve also written memoirs, did you ask them for any advice?

I asked people when I first started writing and then I realized that the stuff that works for some writers didn’t work for me. Sometimes people would say, “Write a certain number of words every day.” That kind of disciplined approach doesn’t really work for me. I sat down and wrote when I felt like I had the [inspiration].

I just stopped asking writers for advice and instead just gave them adulation and praise for what they’ve been doing. Having somebody like Carmen Maria Machado, Roxane Gay or Jacqueline Woodson on the podcast, these people are incredible. These writers are forming the literary world around with their work. That has been beyond—it’s incredible that I even get a chance to talk to those people about craft.

The memoir is a story of self-discovery, but also kind of a story of rediscovery. I both laughed and was also very touched by the shared childhood picture of you in a Garfield costume picture. It became so emblematic of finding yourself literally and figuratively at the same time.

I like myself better having written this book. As a child, I felt so much shame about the way that I looked, my gender non-conformity, and my body. Even though I grew up, I don’t think I ever revisited that person. I think most of us don’t, we just keep going forward with our lives. And in writing this book, I had to revisit that little person. I had to look at photos of myself and not just look at them from a distance, but try to remember what I might have felt in that picture. It really changed my concept of self-love. I had a chance to speak to Tegan and Sara Quinn about their memoir last year when it was published and I know that they told me they had a similar experience too.

I put photos of myself as a kid on my fridge and I look at them every day and I just feel like this is the cutest kid in the world. If I met myself, I would say, “We must protect her, she is a goofball!” I would encourage any queer person who might have felt some dysphoria or some non-acceptance of themselves to try to look at that human being again, revisit who you really were and think about meeting yourself. If you had met that kid with the weird haircut or with the strange obsession with collecting Ken dolls instead of Barbie, what would you think of this kid? I kind of love this kid. She’s herself.

Save Yourself is such a great title that encapsulates a lot of elements of the book. Were there any alternative titles you came up with before you decided Save Yourself was the right one?

For a while, I became really obsessed with the idea of it just being called Dyke and in large lettering. I was just imagining people carrying that book around or seeing that book on a shelf. And it was suggested to me that maybe that’s a less inviting cover in an airport bookshop; that maybe that’s a very intense statement. I love making intense statements, but I didn’t use that title for this one, so maybe that book is still to come.

I was thinking, as you’re saying it, that maybe it should be in a lot of airport bookstores, your Hudson News-es.

It’s hard to take a risk with your first book. So, don’t worry, that’ll be my third because I already know what the second book will be. So, the third will be Dyke.

Your editor is on the line, right? Just to make sure they hear that: you have a three-book deal.

Interview: Tom Spanbauer
French, Arabic, English: Abdellah Taïa Discusses His Novels and Why He Uses the Language that He Doe...
Brontez Purnell: On His New Book 'The Cruising Diaries,' Silencing the Critics, and the Joys of Writ...