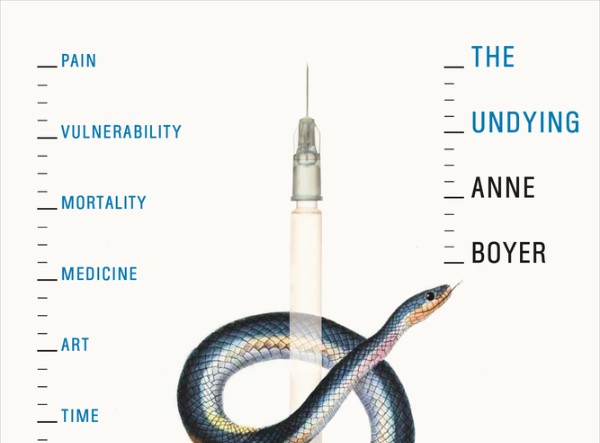 The Undying by Anne Boyer

The Undying by Anne Boyer

Reading Anne Boyer’s The Undying made me think about the first time I saw a solar eclipse. I was looking at a piece of paper in my dad’s hand and wondering why my back was to the sun. Boyer’s account of being diagnosed with breast cancer is the exact opposite of those pieces of white paper my dad used to protect my eyes. She faces the topic of cancer head on. And in doing so, she made me realize that what I thought I knew about the disease was really just a reflection of it.

At 41, Boyer was diagnosed with a deadly form of breast cancer. She found the lump with a partner before attending an action movie. As a single mother, treatment involved driving herself home after a double mastectomy, asking friends to take time off of work when she couldn’t drive herself, and lying alone in a vintage Queen Anne-style four-poster bed that was never meant to be a sickbed. All the details given in the text aren’t there to induce sympathy but rather specificity. Boyer is interested in documenting the realities of suffering the way a critic might document the events of a movie. Only in this case, the critic would also have to be in the movie.

As an essayist and poet, Boyer turns first to the canon of writers who were diagnosed before her. She cites Audre Lorde’s The Cancer Journals, Kathy Acker’s “The Gift of Disease,” and Susan Sontag’s Illness as Metaphor. It’s foreboding to read these names, have their sentences quoted inside Boyer’s, when history shows us that each of them died from a form of the disease Boyer is in the midst of fighting. Boyer doesn’t shy away from this fact though. There’s an urgency to the writing in this book that keeps delicacy out. It changes the framework we give to sickness. There is no pre- and post-disease when one person’s diagnosis bleeds into another’s and another’s. History becomes one long stream of illnesses leading into one another. Dates are introduced only in relation to cancer diagnoses and deaths. It’s relentless and never ending. “Jacqueline Susann, diagnosed at forty-four, dies of breast cancer in 1974, the year Sontag is diagnosed.”

Boyer writes directly into this group. She explores the distance others have used when writing about this disease—the avoidance. As she traces narratives, she recognizes that the most accepted story of cancer is that of the survivors. This is the perspective of the illness that readers feel most comfortable with. Although her book is called The Undying, Boyer isn’t writing a survivor story. In fact, the use of a gerund in the title emphasizes this point. The dying or surviving is still very much going on. Maybe it never really ends. Boyer seems to want to place us in this middle ground, to force readers to reckon with what the disease is in the present moment.

Early on in her diagnosis, when an old student learns of Boyer’s current state, they ask her if she’s heard of juicing. The cures for cancer are just like the descriptions of it; they’re apophatic in nature. From pink ribbons, to chemotherapy, to organic green smoothies and positive thought, the world of wellness and survival seems to be about looking another way. No doubt many of these treatments have led to cures, but the underlying exploitations and beliefs revolving around each hold darknesses which Boyer casts a light on.

On YouTube, Boyer finds vloggers documenting their experiences with breast cancer and the various remedies they turn to for hope. One vlogger named Christina rejects chemo and radiation and decides to heal the disease with diet. Perhaps most alarming in Christina’s story isn’t her alternative treatment, but the number of times she complained to doctors about her symptoms and was dismissed. Or maybe even more alarming still are the comments on Christina’s videos. On her last post, once she has already passed away, a commenter says Christina should try apricot kernels. Another suggests hemp oil, and still another congratulates Christina on her number of followers.

These kinds of horrific facts litter the pages of Boyer’s book. Often the short sections end with discouraging details left hanging without observation. It’s like the writer is opening doors, letting our reactions sit in the silence of hers. Maybe one of the biggest doors Boyer breaks open is that of the infamous pink ribbon. Susan G. Komen for the Cure is the world’s largest breast cancer charity. In addition to questioning whether their pink ribbon logo might have actually been stolen from an activist whose grandmother, sister, and daughter were all fighting breast cancer, Boyer questions the company’s focus. She notes that the salary of the CEO is $420,000 annually and that in 2014 Baker Hughes partnered with the SGK “to produce a thousand breast-cancer-pink fracking drills.” According to one of the cancer vloggers Boyer follows, of the nearly one billion dollars the SGK charity has raised, only a fraction has been used to support terminal breast cancer research. Hope sells better.

Even if analysis of these details is sometimes left to just the facts themselves, The Undying achieves unflinching directness. Boyer makes space on the page to acknowledge what’s been swept under the rug of recovery. She takes time with the things that hurt even though no doctor believed they could hurt. She notes the discrepancies that the health system in this country tries to cover with a kind of pristine uniformity. Sometimes confidence feels lethal. Space is given to all the potential side effects, the things that are felt but not researched, the things patients can say but not prove. Although Boyer survives in the end, she notes that calling herself “a survivor feels like a betrayal of the dead.” She lays many things open in her book, yet still, in the closing paragraph she admits “the great orbs of the unsaid continue to float through the air.” Readers won’t finish The Undying with a sense of hope. I think that’s partially the point. Instead, one walks away from this book feeling a little more capable of seeing these orbs of the unsaid, of considering the “ideological regime of cancer” more critically.