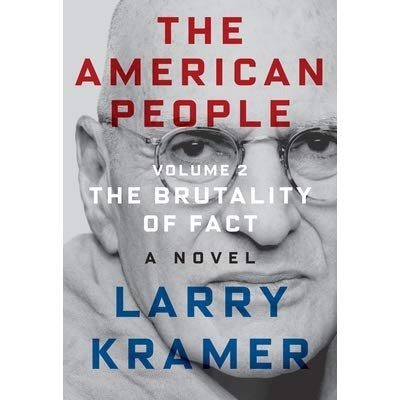 We probably can’t help you with most of your New Year’s resolutions, but if you’re looking to go full bibliophile, you’ve come to the right place. Here’s some new LGBTQ releases to start off 2020.

Playwright, screenwriter, author, and AIDS activist Larry Kramer still has a lot to say about the past and future of the United States, especially the gay United States. This month sees the release of the long awaited sequel to Kramer’s “American history project,” The American People, Volume II: The Brutality of Fact. Prepare to have your mind blown, your worst fears realized, and maybe even your most elaborate cultural imaginings sketched out with this call-to-action satire. 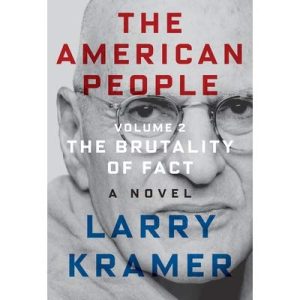 In The American People: Volume 2: The Brutality of Fact, Larry Kramer completes his radical reimagining of his country’s history. Ranging from the brothels of 1950s Washington, D.C., to the activism of the 1980s and beyond, Kramer offers an elaborate phantasmagoria of bigoted conspiracists in the halls of power and ordinary individuals suffering their consequences. With wit and bite, Kramer explores (among other things) the sex lives of every recent president; the complicated behavior of America’s two greatest spies, J. Edgar Hoover and James Jesus Angleton; the rise of Sexopolis, the country’s favorite magazine; and the genocidal activities of every branch of our health-care and drug-delivery systems.

The American People: Volume 2 is narrated by (among others) the writer Fred Lemish and his two friends—Dr. Daniel Jerusalem, who works for America’s preeminent health-care institution, and his twin brother, David Jerusalem, a survivor of a Nazi concentration camp who was abused by many powerful men. Together they track a terrible plague that intensifies as the government ignores it and depict the bold and imaginative activists who set out to shock the nation’s conscience. In Kramer’s telling, the United States is dedicated to the proposition that very few men are created equal, and those who love other men may be destined for death. Here is a historical novel like no other—satiric and impassioned and driven by an uncompromising moral and literary vision. 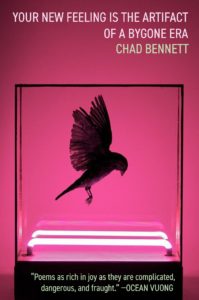 Associate Professor of English at the University of Texas at Austin, Chad Bennett, won the Kathryn A Morton Prize in Poetry for Your New Feeling is the Artifact of a Bygone Era. Bennett is expert at seamlessly exploring queer icons, tropes, sorrows, and celebration.

Shirley Temple tap dancing at the Kiwanis Club, Stevie Nicks glaring at Lindsey Buckingham during a live version of “Silver Springs,” Frank Ocean lyrics staking new territory on the page: this is a taste of the cultural landscape sampled in Your New Feeling is the Artifact of a Bygone Era. Chad Bennett casually combines icons of the way we live now—GIFs, smartphones, YouTube—with a classical lover’s lament. The result is certainly a deeply personal account of loss, but more critically, a dismantling of an American history of queerness. “This is our sorrow. Once it seemed theirs, but now it’s ours. They still inhabit it, yet we say it’s ours.” All at once cerebral, physical, personal, and communal, Your New Feeling Is the Artifact of a Bygone Era constructs a future worth celebrating. 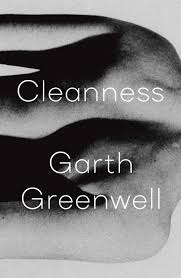 Another fiction sequel is all the buzz: Garth Greenwell’s Cleanness. If you’re interested in the connection between intense love and an intense landscape, this is the book to pick up this winter. It’s been said that Greenwell “writes like no one else;” order his new book and see for yourself!

In this atmosphere of disquiet, an American teacher navigates a life transformed by the discovery and loss of love. As he prepares to leave the place he’s come to call home, he grapples with the intimate encounters that have marked his years abroad, each bearing uncanny reminders of his past. A queer student’s confession recalls his own first love, a stranger’s seduction devolves into paternal sadism, and a romance with a younger man opens, and heals, old wounds. Each echo reveals startling insights about what it means to seek connection: with those we love, with the places we inhabit, and with our own fugitive selves.

Cleanness revisits and expands the world of Garth Greenwell’s beloved debut, What Belongs to You, declared ‘an instant classic’ by the New York Times Book Review. In exacting, elegant prose, Greenwell transcribes the strange dialects of desire, cementing his stature as one of our most vital living writers.

In Kyrkarta, magic—known as maz—was once a freely available natural resource. Then an earthquake released a magical plague, killing thousands and opening the door for a greedy corporation to make maz a commodity that’s tightly controlled—and, of course, outrageously expensive.

Which is why Diz and her three best friends run a highly lucrative, highly illegal maz siphoning gig on the side. Their next job is supposed to be their last heist ever.

But when their plan turns up a powerful new strain of maz that (literally) blows up in their faces, they’re driven to unravel a conspiracy at the very center of the spellplague—and possibly save the world.

Finally, in LGBTQ Studies comes Dennis Baron’s What’s Your Pronoun? This book will prove to be an essential research for a number of people–educators and social workers, parents of transitioning or questioning youth, anyone looking to understand something they don’t quite understand that is everywhere, and of course, emerging as well as established scholars of gender studies. Baron asserts what folx have been saying all along: it’s more than just the word.

Like trigger warnings and gender-neutral bathrooms, pronouns are sparking a national debate, prompting new policies in schools, workplaces, even prisons, about what pronouns to use. Colleges ask students to declare their pronouns along with their majors; corporate conferences print name tags with space to add pronouns; email signatures sport pronouns along with names and titles. Far more than a by-product of the culture wars, gender-neutral pronouns are, however, nothing new. Pioneering linguist Dennis Baron puts them in historical context, noting that Shakespeare used singular-they; women invoked the generic use of he to assert the right to vote (while those opposed to women’s rights invoked the same word to assert that he did not include she); and people have been coining new gender pronouns, not just hir and zie, for centuries. Based on Baron’s own empirical research, What’s Your Pronoun? chronicles the story of the role pronouns have played—and continue to play—in establishing both our rights and our identities. It is an essential work in understanding how twenty-first-century culture has evolved.

And as always, if our reading list of new LGBTQ releases missed an author or book, or if you have a book coming out next month, please email us.