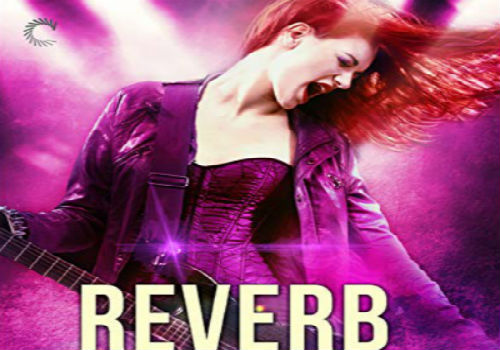 If you like rockstar romances, found families, and joyfully queer representation, Reverb is the book for you.

As the bassist in Twisted Wishes, Mish Sullivan is used to being adored. After all, she’s talented, tall, and gorgeous with an edgy style. That adoration is taken too far, however, when her stalker lands her in the hospital, and the rest of the band agrees it’s time to get a bodyguard to keep an eye on the band. Used to taking care of herself, Mish hates the idea, although she comes around to it quickly when she sees how hot and charming the guy they hired is.

Mish put her hands on her hips. “I could stick you in my pocket!”

“You could try.” He grinned up at her. “But I’m well versed in taking tall people down, I have a couple of black belts, and was in the army for twelve years. So you might not succeed.”

This time, it was her mouth that twitched up. “Might not?”

“I’m confident in my abilities, but never say never, you know?” He rocked back on the stool. “Besides, I saw the photos of your assailant. You’re tough, Sullivan.”

“Call me Mish.” Her hands were still on her hips, but her smile was wide.

David Altet might be used to doing private security gigs and it’s a perfect post-military job for him, but touring with a popular rock band is on a whole other level. It doesn’t help that he’s tasked with keeping safe one of the most beautiful women he’s ever met or that she keeps flirting with him, never batting an eye when she learns he’s trans. He knows that he needs to stay detached to do his job well, but that’s hard to do when Twisted Wishes is a family and they’re welcoming him in with open arms.

Despite David’s misgivings, he and Mish give in to their attraction, burning up the sheets and beginning to genuinely care about each other. But the stalker doesn’t give up easily, so David finds himself at a crossroads, choosing between his heart and Mish’s safety.

Reverb is the third book in the Twisted Wishes series, with the first two books following other bandmates as they find their loves. It’s not necessary to have read either of them before picking up Reverb, but you may want to read them first if you’re concerned about spoilers for what happens in them or are a completionist.

Like the rest of the series, Reverb is a queer romance, and the queerness extends to its side characters too. Mish is a pansexual cis woman and David is a trans man. The two other couples in the band are male/male, and one of the men is aromantic. The total lack of agony over any of their queerness is refreshing, since there’s no biphobia or slutshaming about Mish’s romantic history with men and women (a common pitfall with bisexual characters in romance, which has been getting better in recent years), or transphobia directed at David. Instead, Reverb dishes up tons of delicious sexual tension, with Mish and David’s vulnerabilities coming from other places in their personal histories.

Mish doesn’t change much in this story, which is fine, because she’s a powerhouse who’s fine exactly the way she is. David, on the other hand, has a massive character arc in Reverb, coming in as a loner who is quite content with that identity. He thinks there’s only one way to do his job—keeping the band, and especially Mish, at arm’s length—and it makes sense, since that’s how he’s been successful for so long. But the band is having none of it because they’re the ultimate found family, loving each other for exactly who they are, rather than in spite of the faults they may have. David has to come a long way to accept that, especially when things go down with the stalker, and it’s heartwarming to see him figure it out, thanks to patience from not only Mish, but the other side characters too.

For anyone wondering, David’s transness is beautifully handled and there are zero info dumps around what it’s like to be a trans man. That said, even though there aren’t obvious teachable moments about trans experience, people who don’t know much will still likely learn from the way David is portrayed. There’s also an interesting parallel between David and Mish, since she’s living a totally different life from the one she grew up with too, including a different name. We never learn the names either character were born with, and that feels exactly right for this story and its message of loving yourself as you are now and accepting love from the family around you.

Readers who are looking for a strong suspense element may not be satisfied with Reverb, because it is a romance first and foremost. The stalker element is a strong part of the book, but because the relationship between Mish and David takes precedence over everything else, it doesn’t feel like a big deal when the identity is revealed and that part of the story is wrapped up. That said, it effectively drives the narrative without being contrived.

Overall, Anna Zabo’s Reverb is a beautiful, emotional read, and a wonderful antidote for a bad week.

'Eyes of Water & Stone' by Cedric Brown
KG MacGregor: Love is All Around
Rick R. Reed: Master of Romance and Horror