These are a Few of Our Favorite Things

These are a Few of Our Favorite Things 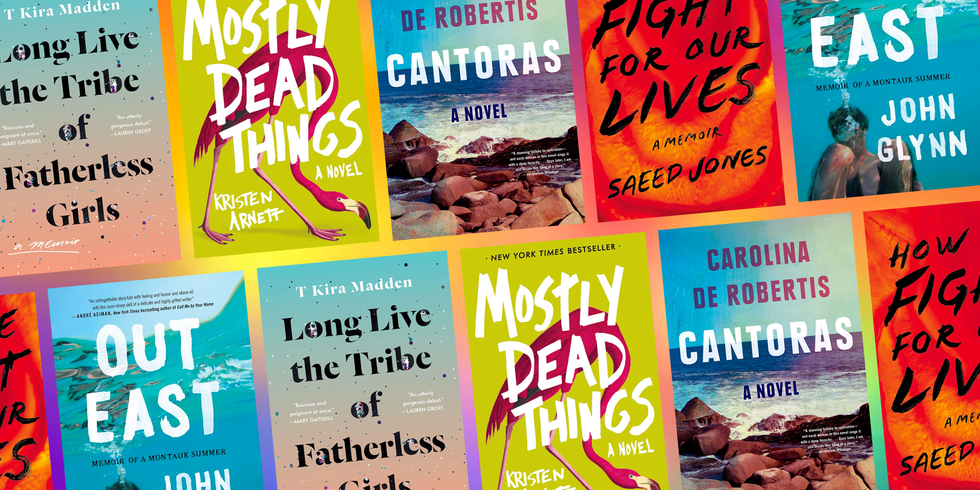 As the Thanksgiving season quickly approaches, it’s hard not to think about what we’re thankful for. 2019 has spawned some of the most incredible works of LGBTQ literature that this decade has seen. Queer and trans writers are rising to the forefront and our voices are not only being heard, but sought after, and rightfully so.

This week, we take a look at what Oprah, the queen of media herself, identifies as some of the best LGBTQ lit of 2019, celebrate the legacy of trans writer and activist Lou Sullivan and his new memoir, and hear about Saeed Jones’ unique approach to storytelling that’s made his new book, How We Fight For Our Lives, a smash!

Everyone knows that when Oprah speaks people listen. Recently, Oprah and her team at O, the Oprah Magazine, published a list that they are calling the 23 Best LGBTQ Books of 2019. We immediately jumped at the chance to take a peek at this list and see Oprah what had to say about some of our faves from the year. Of course we can’t share everything, but here are three books that stood out:

“Tired of swimming against the tide of the oppressive Uruguayan dictatorship of the 1970s, five queer women flee to the country’s idyllic coastline in search of solace and solidarity. Over the next three decades, they form a ‘family stitched together by the very fact that they’d been torn from the fabric of the accepted world.’ Every line of this gorgeous and grippingly adventurous tale sings with lush, aqueous beauty.”

Is This How You See Me? by Jaime Hernandez

“In a recent interview, novelist Marlon James likened the Hernandez brothers’ long-running, wildly acclaimed Love and Rockets series—an Archie-esque slice-of-life comic portraying a Latinx community in California—to One Hundred Years of Solitude. Here, in a standalone graphic novel, we catch up with aging punk rockers Maggie and Hopey as they try to relive their glory days (and perhaps rekindle their romance).”

“Like a name carved deep into the bark of a tree, Tariq’s assured, ineradicable verse presses the poet into a lamentable history and makes it his own: ‘I don’t hate the South, I hate its longing to/forget ruin. I hate its calling of my not name./It is its own, as I am also.’”

Many of you may know Lou Sullivan whose bold advocacy in the 1980s raised awareness about the lives and experiences of transgender men. Lou passed away in 1991 from AIDS-related complications, but his voice and story lives on today in the newly published memoir, We Both Laughed in Pleasure: The Selected Diary of Lou Sullivan 1961-1991.

In the article, “A Trans Activist’s Memoir Is a Monumental Contribution to Queer History”, Mark Gardner expresses their admiration for the trans icon and elaborates on Lou’s impact today:

“Sullivan’s work within the LGBTQ community was no less exceptional, writing a biography of pre-Stonewall trans figure Jack Bee Garland, and contributing to newsletters, historical societies, and educational organizations that extended locally from San Francisco to the international stage. Sullivan’s diary entries are personal and political. They are recollections of many sexual escapades, but they also demonstrate his activist sensibility, that he was aware of his body and lifestyle as political issues, and of being in the throes of one of the largest gay scenes in the United States. Sullivan’s queerness and love of gay masculine culture — from bars to films to literature — date to the start of the diaries. But he would soon become a part of the HIV/AIDS crisis, the defining tragedy of gay communities in the US in the 1980s. Sullivan was diagnosed with AIDS in 1986. “I have AIDS. How in the hell could this have happened?” he wrote, initially resigned to being in his “Last Chapter” while at a hospital.”

Without a doubt, Saeed Jones’ new memoir, How We Fight For Our Lives, has taken the queer literary community by storm. Saeed was interviewed by Salon.com earlier this month where he talked about writing for young queer Black people saying that they “are always first and foremost on my mind.”

Saeed, who is teaching at this year’s Emerging Writers Retreat for LGBTQ Voices, later went on to share some of his thoughts about audience and how he goes about writing:

I think often that if I do my job as the storyteller, it’s going to resonate with unexpected readers. When I follow through with my intentions, then I hope a natural growth out of that effort will connect with people. Like when I brought my mother to life on the page and really colored the emotional nuances of our relationship, then you do not need to be me to understand why she was a special person, why we had a special relationship. And certainly, to understand the depths of the struggle for two people who love each other so very much. I don’t go out of my way to be an ambassador to straight people or to white people, but if I do my job well it’s going to happen.

“The lit fest essentially aims to engage with the truths of identity and diversity, and while drawing on the distinctions, we wish to address the common ground of humanity. There is no better way than literature, art, poetry, music and talk to bring such topics to life!” – festival director Sharif D Rangnekar, author of Straight To Normal – My Life As A Gay Man

Are we the only ones that just love hearing queer authors in conversation with one another? Recently, James Polchin, author of Indecent Advances: A Hidden History of True Crime and Prejudice Before Stonewall and Carley Moore, author of The Not Wives, met to talk sex and politics, the significance of publishing during the 50th anniversary of the Stonewall uprisings and articulating authentic sexuality on the page.

In one of our favorite pieces of their conversation, Moore talks about their process of illustrating the sexuality of adult women who happen to be parents.

I really wanted to tell the story of these three women, and I really wanted to have a sexual mom at the center of things. I think that parents are sexual beings, too, and mothers, especially, get sort of desexualized. You’re pushing a stroller and you’re breastfeeding, and it’s like: ‘Oh my god, you’re so gross.’ I think it’s still tricky to be a queer parent, because you desexualize yourself almost immediately if you admit to being a parent at a gay bar.

November 20th was Trans Day of Remembrance, a day dedicated to uplifting the memories of the many transgender folks who are no longer with us, and whose lives have paved a way for many more to exist. As we work to continue to remember the trans folks who’ve come before us, we’re delighted to see so many trans authors shining today.

In their article “13 Transgender Authors To Read On Trans Day Of Remembrance & Every Day”, Bustle.com reminds us of the rising class of trans writers shining today. The list includes emerging trans authors such as Casey Plett alongside bestselling writers like Jennifer Finney Boylan and Stephanie Burt.

In Lithub, beloved author Dorothy Allison gave some writerly advice “on the importance of making the reader uncomfortable.”

We would be remiss to not acknowledge that this year marks 45 years since famed gay author Edmund White began his publishing career. Simply put, “the category of coming-out-story did not exist before he wrote A Boy’s Own Story, and in his quartet of novels he mourned the lives of friends, lovers, neighbors and strangers killed by AIDS.”

This week, Edmund was recognized as the National Book Foundation Lifetime Honoree at the National Book Awards and as a special treat, he’s shared a snippet of his forthcoming piece of fiction, A Saint From Texas, that will be published in August, 2020.