‘I’ve Seen the Future and I’m Not Going: The Art Scene and Downtown New York in the 1980s’ by Peter McGough

‘I’ve Seen the Future and I’m Not Going: The Art Scene and Downtown New York in the 1980s’ by Peter McGough 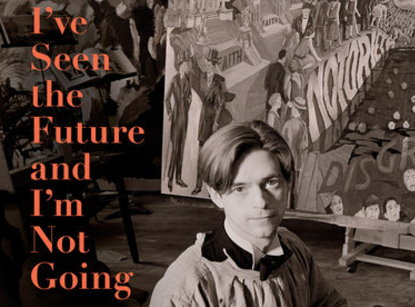 Peter McGough’s memoir dishes on artistic life in 80’s New York City. McGough gives us a gilded pendulum, swinging from poverty to excess and back again, detailing libidinal exploits, some seriously complicated relationships, life-saving friends, and celebrities galore. In other words, all that glittered in that decade of decadence and death. His voice throughout the book crackles with outrageous details and fascinating gossip. I’ve Seen the Future and I’m Not Going reads as a lifetime of alternately hilarious and chilling dinner stories compressed into one protracted feast, with several harrowing courses of famine thrown in.

His partner in crime, David McDermott, referred to as McD throughout, is one of those characters that are born elsewhere and almost always end up in New York, where their madness is quickly realized as ingenuity. McD gains capital within an ever expanding and contracting network of fellow artists, poseurs, freaks, free-thinkers, entrepreneurs, class acts, loafers, and dreamers. (For all of those who think New York City’s best days are in the past, this is still going on and will continue to do so; the caravan has simply decamped to Brooklyn. Please make peace with that.) McD lives, in terms of aesthetics and practicalities, at the turn-of-the-century, (as in by candlelight and without electricity) and has wild ideas about the passage and flow of time, “. . . the future has been canceled! We’re all marching off a cliff to the future. For what? Hideousness, that’s what! I’ve seen the future and I’m not going.” (Italics mine).

Entranced, the youthful McGough, a fresh arrival in New York City himself, joins McD and together they travel back in time; they are anachronistic in terms of fashion, arts, and lifestyle. As the 80s art scene explodes, this utterly unique gay couple, with an aesthetic so diametrical to the burgeoning trends, is doubly embraced for their eccentricity and originality, and rightfully so: the work they produced is iconic, landing them in the Whitney Biannual and galleries and shows around the world.

Many fascinating folks populate I’ve Seen the Future and I’m Not Going. Warhol, Haring, and Basquiat are here, though Julian Schnabel and his wife at the time, Jacqueline Beaurang, drop in like angels with checkbooks for wings throughout the book. Their financial support is buffered by genuine, guiding friendship, particularly during McGough’s darkest days. AIDS burns through this memoir with all the dreadful brightness of a raging forest fire, one that once ignited, is never fully extinguished. McGough describes the horror of the silence and confusion surrounding the disease in the early years; uncertainties abounded as the body count grew while a fickle nation wanted its MTV and little else.

How lovely that this memoir closes with the recent success of their Oscar Wilde memorial, which first appeared in New York and now has a permanent home in London:

We finally had a temple/chapel/church for and about the LGBTQ community. I consider this the greatest achievement of our almost forty years . . . I wanted visitors to find solace in this place and be able to be married without a sense of being condemned by religious dogma. With both spaces we raised money for homeless LGBTQ youth.

And with that lives dedicated to self-expression create a work that both articulates gay history and generates what has been rarely afforded us outside the bar scene: a sanctuary of our own. I’ve Seen the Future and I’m Not Going is an expansion of this temple, While Wilde lost in court and posthumously became a saint, McCough not only survived his trial by fire but by sharing this remarkable memoir with us, deservedly gets to collect the accolades robbed from so many artists who died too early of AIDS.