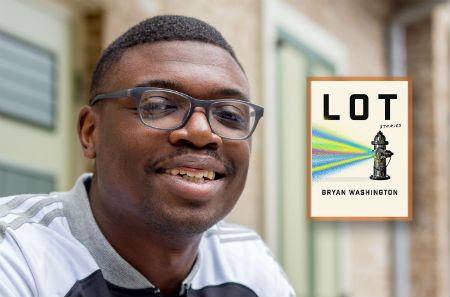 We’ve got some sizzling news for you in the world of LGBTQ writers. The Ernest J. Gaines Award, interviews, Off Broadway, On Broadway, and…lists. We like lists.

The Ernest J. Gaines Award for Literary Excellence honors Louisiana’s revered storyteller, Ernest J. Gaines, and was founded to both inspire and recognize emerging African-American fiction writers of excellence at a national level. The winner for 2019 has been announced, and it is…drumroll please…Bryan Washington, one of the National Book Foundation’s 5 under 35, for his debut collection of stories entitled Lot. Called a “profound exploration of the true meaning of borders” by the New York Times, the world of Lot is a bustling Houston that has challenges at every corner for a young queer boy of color. Congratulations, Bryan.

Around him, others live and thrive and die in Houston’s myriad neighborhoods: a young woman whose affair detonates across an apartment complex, a ragtag baseball team, a group of young hustlers, hurricane survivors, a local drug dealer who takes a Guatemalan teen under his wing, a reluctant Chupacabra.

Do you know who wrote this most influential gothic horror novel? Mary Shelley. And she was bi. Read up on this lady’s life as well as some thought-provoking arguments on why it is important to continue to acknowledge new research like this that comes up. Oh, and if you live for 1800’s sex slang, you’ll be sure to learn a new phrase in this article.

What I have found time and time again in the archives, is incredible evidence of queer lives being lived throughout the centuries. In the 1880s, science and medicine perfected pathologizing sexuality and defined anything outside heterosexuality as a mental disease. But before this, sex, love, and identity were very much individual choices. Shelley’s admission that she turned to women for sexual gratification shows us that to her, and many like her, sexuality did not fit the binary boundaries we have projected unto those in the past- and ourselves today. Acknowledging Shelley’s sexuality is very important for bi-visibility, something we still struggle with. But bi-history is everywhere, and it has a new icon. Long may she reign.

The Inheritance opens on Broadway November 17th after a successful run in London’s West End. Here, playwright Matthew Lopez offers us his inspiration for this “seven hour gay play,” what it means to be a gay man today, as well as some poignant words on queerness in theatre:

One of the things that drove me crazy about comparisons [of my play] to Angels in America is it ignores all the great plays that have come since. If there’s anything that I hope comes as a result of the attention that’s been paid to this play, it’s the realization that theaters are hungry for bigger stories about all of the letters of our alphabet. I told my story and I contributed my story to a larger story, but my story cannot be the story. My story is a story, not the story.

HipLatina has published this list of “Twenty Chicana Writers Whose Work You Should Know.” The list contains a versatile group of women all across the age and geographic spectrum, some who may have been on your syllabus and some who should have.

If lists give you the false illusion that your life is in order, here’s another one. Bookriot has drawn up a list of ten queer Young Adult Fantasy Series, which either center queer characters or, no exaggeration here, take place in queer utopia kingdoms. Bookriot: keeping my bookshelf filled since 2011.

The American Psychological Association broke the internet for a few hours last week when it was announced that they would endorse the singular “they” pronoun. That’s very important, but here is an article that can tell you all about how queer zines have made platforms for marginalized genders and sexualities for decades. This one specifically looks at the asexual community, who far too often get left out.

Robyn Crawford, longtime best friend and professional gatekeeper of the late singing sensation Whitney Houston, has published a memoir entitled A Song For You that largely focuses on the nature of Crawford’s relationship with Houston. In this intimate conversation with The Advocate, Crawford reveals the depth and complexity of their love. Perhaps most assuredly, Ms. Crawford emphasizes that the decision for Houston to deny the allegations of an affair between the two women during the 1980s was mutual and not indicative of their connection with one another:

The love that we shared, it was deep, really deep.… One day, we decided — before her career really took off, before she recorded her first album — that if people found out about us, they would use it against us. So we made the determination to not be physical any longer. We sat down and made the conscious decision that we would not do this. I loved her. It was important for our love to be unconditional and nothing ever changed.

Twenty-five years ago, trans theorist and activist Susan Stryker published My Words to Victor Frankenstein Above the Village Chamounix, a revisitation of a speech she gave at California State University, San Marcos. Her argument as “transness as monstrosity” certainly sounds a little alarming out of context. Them has interviewed Susan, here is what she has to say, and it makes a lot of sense:

“If we live in an anthropogenically changing climate, one way to address that is to change what it means to be human. And so [we can] imagine a human subject that desires differently, that imagines its relationship to the environment differently, that imagines sociality to be different, has a different relationship to technology and embodiment,” Stryker tells them. “These are the things that we’re talking about with trans. It’s the reformulation of something that is meant to be inhuman or as feared as representing an inhumanity, an unnaturalness, a monstrosity, and using that as the basis for imagining how people can be otherwise to how they are.”

Transness, by Stryker’s logic, exists as a metaphor for our profound capacity to remake ourselves and the world around us into a more livable reality: “To make that gender transition, you confront the possibilities and potentials and terrors and dangers of what it means to radically transform,” she says. “It’s kind of like saying, ‘Look, I know that combating climate change means we need to have a really different relationship to consumption and pleasure, and movements and relationality. You know what? As a trans person, I got you.’”

Previously praised as having launched the second wave of trans studies, writer and critic Andrea Long Chu interviews with The Nation to discuss her nonfiction debut Females.  Check out the interview to learn about how Chu’s relationship with the avant-garde seeps into her writing, oh, and why each chapter of Females opens with lines from Valerie Solanas’s play Up Your Ass.

And check out another hot article right off The Nation’s press. Naomi Gordon-Loebl offers personal and profound insight into Bruce Springsteen as a queer icon, or rather, how a straight rock and roll star became so beloved by queers accross the country.

[This] raises a difficult question: What exactly is so queer about Springsteen? Is it his extreme butchness, so practiced and so precise that he might as well have learned it from the oldest lesbian at a gay bar? Is it because his hard-earned, roughly hewn version of love is recognizable to those of us for whom desire has often meant sacrifice? Or is it something simpler? Do many queers love Springsteen because nearly every song he has produced in his 50-year career reflects a crushing, unabiding sense of alienation and longing—and what could be more queer than that?

Édouard Louis at twenty seven is already revered in France and around the world as a public intellectual, for his scathingly honest works on sexuality, class, and cruelty in France. And the world has took notice. Not one, but two stage adaptations of his books are coming to New York. From November 14th to the 21st, you can see The End of Eddy at Brooklyn Academy of Music and History of Violence at St. Ann’s Warehouse from November 13th to December 2st. The interview includes defining moments of Louis’ life involving working through shame with no safety net.

After all, he is gay; and every gay person, Louis thinks, is a born actor. As the child of a working-class family — his name was Eddy Bellegueule back then — in a northern French town of less than 1,500 people, he would drink beer, talk about soccer or make fun of girls. Every day, he said, was a performance, “to protect myself from homophobia and masculine violence.”

My last article featured a short excerpt of Abby Stein’s Becoming Eve. By chance, I happened upon a much longer excerpt published on Lithub and I just had to include it here again for Stein’s sharp and humorous dialogue amidst a great deal of unimaginable isolation and pain. Here, she captures what it was like to be under such a watchful gaze at Yeshiva school, when she had lived previously before coming out as a trans woman:

I showered every day. I didn’t mind waking up early, and showering made me feel better. Somehow it made me feel a bit more feminine, more me.

“Um, I use Dove soap and Head & Shoulders shampoo,” I told Eliezer Duvid, showing him the products I had in my hands.

“Really? This is what you are using?” he replied, seeming shocked. “They don’t look or smell like something a Hasidic boy should use. Do you have to use a pink soap bar?” he asked.

I looked down at my soap. “This is what my mother gave me, and it’s what we use at home,” I replied, acting as though I’d never really noticed it before. In truth, I was very much aware that my soap could be considered feminine. But it was something I could get away with, even in an all-boys’ school, and I didn’t feel I needed to defend it.

“Are there any yeshiva rules against using specific soaps and shampoos?” I asked Eliezer Duvid, getting a little annoyed.“Well, no,” he said.

“Do you ask all the students which kind of soap they use?” I asked him next.

Blacklight: James’ 'A Kind of Justice' Depicts the Struggle of a Shrewd Transwoman Accused of a Vici...
David Sedaris Talks RuPaul's Drag Race, Octavia Butler Remembered, and Other LGBT News
'The God of Longing' by Brent Calderwood