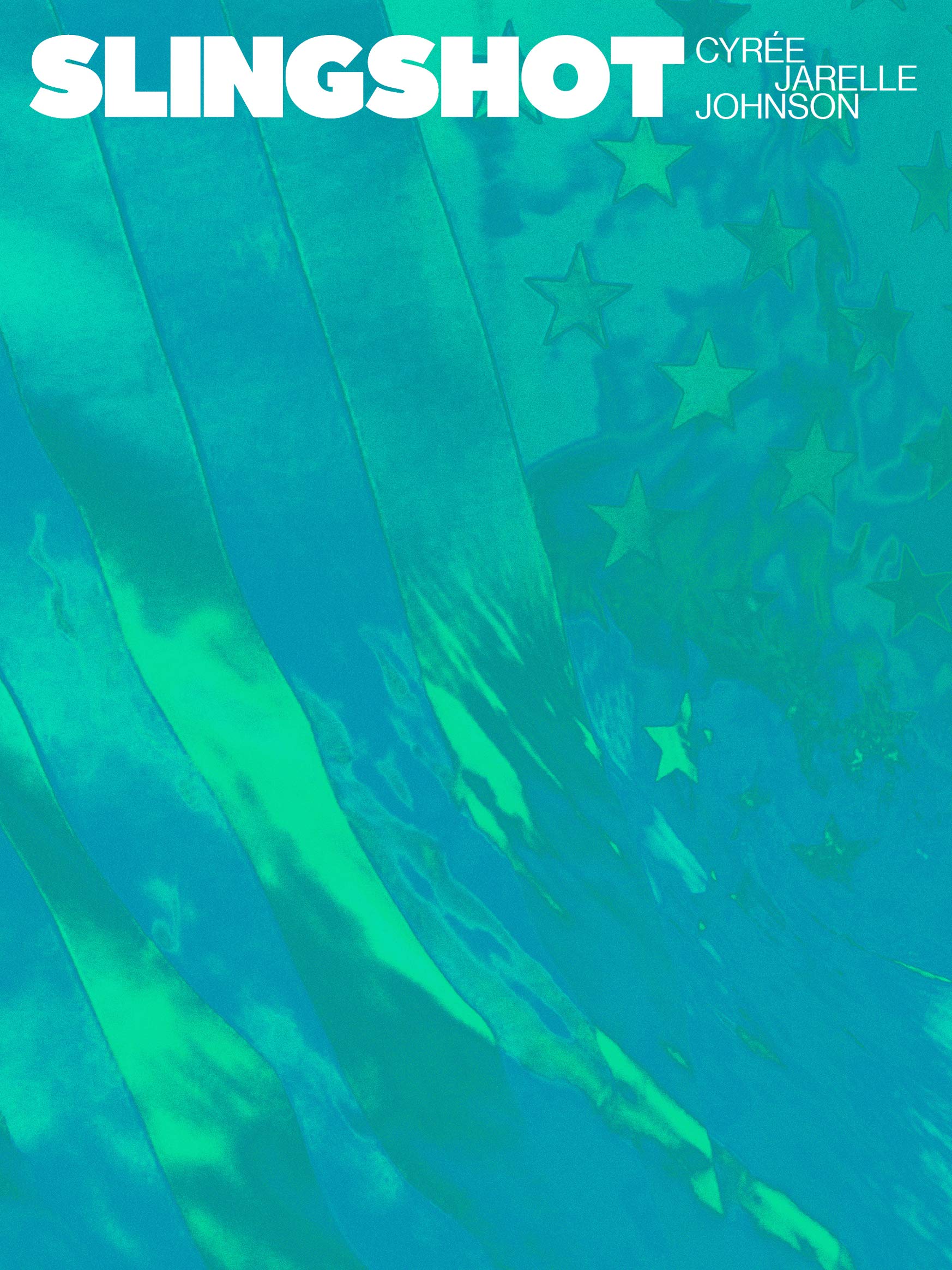 There are a lot of reasons to read Cyrée Jarelle Johnson’s new book of poetry. Many readers will pick it up because of its contributions to crucial contemporary conversations ranging from blackness, transness, sex work, police violence, protest and neurodiversity to the new Star Wars movies. Slingshot is also worth getting, however, for its strange, precise, sumptuous and formal poetic technique. Here, as an example, are the opening stanzas of “false sonnet embroidered w/ four loko empties”:

Wishbone/Fishbone asleep on my wing chair
central to this scene’s rent glamour
______until the body replaces her. The sear bare
______for I, thick thighed human sitter who nurtures

a contempt for the subway. Slick benches
vice my abundant meat. Signs chastise
me smaller, smaller as though we were finches
–  shit, some of us are.____Yoga pants is surprised

______At my public comfort, unearned in her eyes.
______Wobbly and painful her interruption
into my lap, both her legs across mine,
pure nuisance. No ask yet all intrusion.

The technical features of this are all about slipping out of one’s grasp, not gently, like sand, but in a muscular fashion. The rhythm, most immediately, is forceful, but also sinuous, never quiescing into predictable meter. Look at the first stanza. The first line is a syncopated earworm–trochee, dactyl, dactyl, trochee–and it is followed by another broadly dactylic tetrameter, but then line three abruptly turns on its heel into iambs and anapaests. And just when readers think they have the measure of this, line four starts with another iamb before switching back to trochaic/dactylic on “thick-thighed.” None of these twists and turns interrupt the percussive motion of the verse; rather, they keep us guessing.

This, too, is the case pertaining to Johnson’s rhyme. The opening “chair/bare” is the only full rhyme in the poem; what is interesting is how the other rhymes twist away from fullness. Take the second stanza quoted. Let’s stipulate that standard half-rhyme offers a rhyme on a single, stressed syllable, and matches one part of the second half of that syllable, either the vowel or the consonant after the vowel, while failing to match the other. Johnson here uses a number of techniques to produce half-rhymes that both skim closer to fullness and swerve away more dramatically. The rhyme “chastise/surprised” for instance, uses a first rhyme word (“chastise”) with no constants after the vowel in order to enable the second rhyme word to actually deliver a full rhyme (“surprise”) before surprising you by snatching it away with the final “d.” More dramatically still, “finches/benches” takes a perfectly normal stressed-syllable half rhyme (“finch/bench”) and adds (note that this addition is, also, part of the iambic/trochaic variation described above) an unstressed final syllable to both words to produce a rhyme in which the two final syllables (“-nches” and “-nches”) are identical, but which is nevertheless absolutely not a full rhyme. And don’t even talk to me about the rhyme (not in the quoted section) between “fists” and “fluster.” These are all strong choices, and they are all evasive choices.

The poem’s lexical decisions are equally strong. It is embroidered with ambiguities, but these are not subtle, cumulative, “both/and” ambiguities; they are disruptive, disjunctive ones, in which something more threatening lurks (only just) behind the primary sense. “Rent” in line two, for instance- is this a reference to the musical, or is it a tearing? Is “vice” a reference to sex or to a device for clamping? “Interruption” seems clear enough, but paired with “into my lap” the “eruption” comes to the fore to suggest the sexual encounters haunting this scene of platonic boundary violation. Paired with these open ambiguities are choices that, whilst not ambiguous, are uncanny, off-putting: using “the body: instead of “I;” “I” instead of “me”; attributing agency to benches and signs; placing the adjectives “wobbly and painful” at the start of a sentence; refusing to concede a main verb in the opening clauses. These are all highly stylised moments, dangerous and unpredictable. The poem concludes “I’m a full grown // whatever-the-fuck, and I will devour any / attempt to subdue me     with monstrous animality” but it hardly needs to tell us that–its nature is evident from the way it speaks. It reclaims the animality attributed to blackness as a mode of resistance, not only through argument, but through the dash with which it handles verse form.

Not all poems in the book are exactly like this. Some, like many sections of the long sequence, “A Machine of Mahogany and Bronze,” sit closer to prevailing contemporary free-verse modes. All, however, are clearly works of ornate and deft craftsmanship. Perhaps it is even arguable that sometimes Johnson gets carried away with their craft, becomes (is it possible?) a little too rococo. This is, after all, a book which uses the word “petrichor” not once, but twice. But too much is always more desirable than too little. You should go out and buy Slingshot.

May We Present... Muriel Leung's Imagine Us, The Swarm
‘The Padisah’s Son and the Fox’ by Alex Jeffers
A Soaring Queer Campus Novel: Brandon Taylor’s Real Life