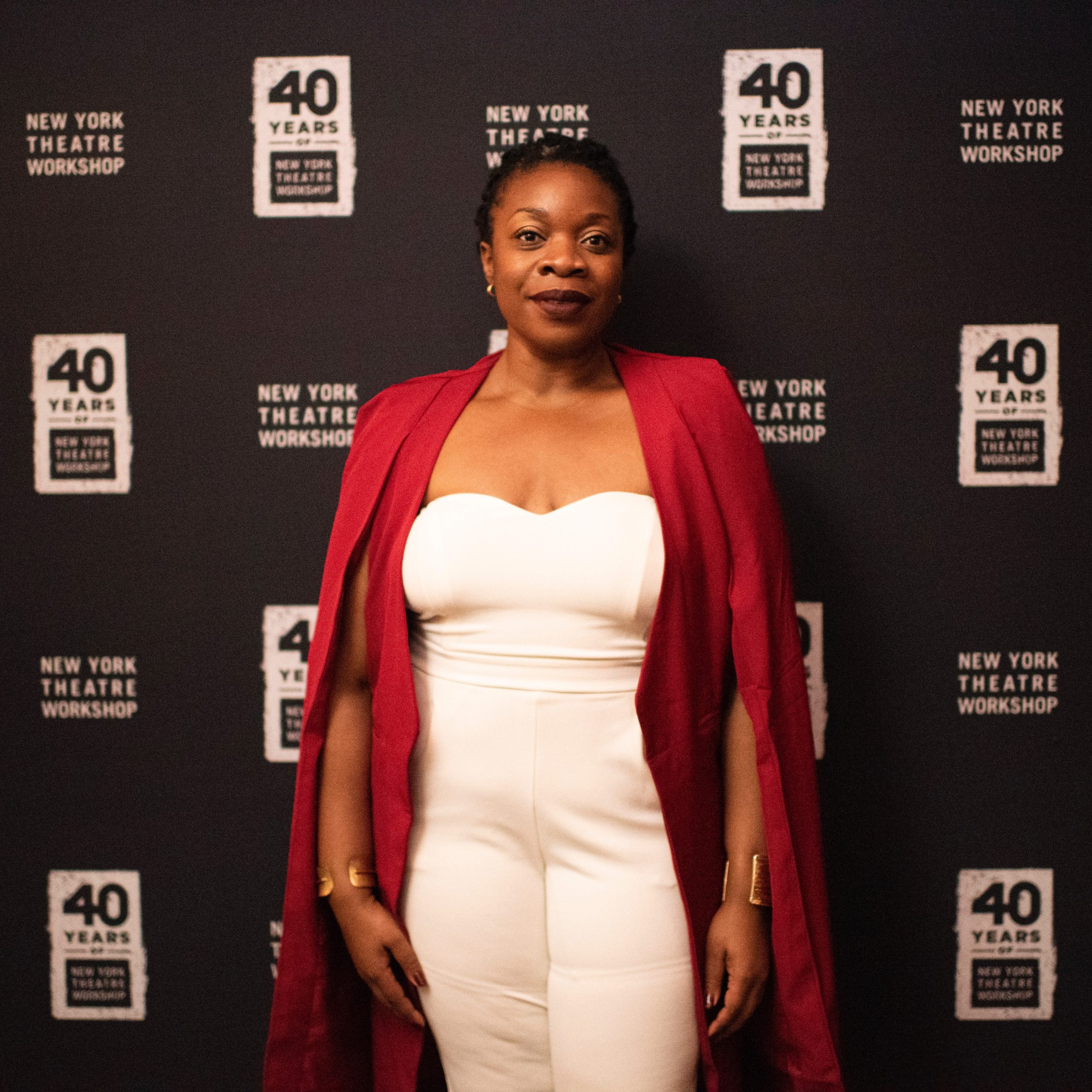 Since the mid-aughts, Udofia has been crafting “The Ufot Cycle,” a series of interlocking plays that map the American immigration experience through one singular Nigerian family. With a planned nine play cycle, Udofia epically endeavors to cross time periods and themes to present an expansive portrait of one family’s travails, as they leave one home behind to build a different one.

A noted actor and educator, Udofia attended Wellesley College and obtained her MFA in Acting from the American Conservatory Theater. She’s the recipient of the 2017 Helen Merrill Playwright Award and the 2017-2018 McKnight National Residency and Commission at The Playwrights’ Center in Minneapolis. Her plays have been developed and/or produced by The Playwrights Realm, The Magic Theatre, Dr. Barbara Ann Teer’s National Black Theatre, Hedgebrook, Sundance Theatre Lab, NNPN, Space on Ryder Farm, NNPN New Play Showcase, Makehouse, Soul Productions, terraNOVA, I73, The New Black Fest, Rising Circle’s INKTank, At Hand Theatre Company, and The Standard Collective. In addition, she served as an instructor at the 2019 Lambda Literary Retreat for Emerging LGBTQ Voices.

With two of the “Ufot Cycle” plays, runboyrun & In Old Age, currently running at the New York Theater Workshop until October 13, Udofia took a break from her involvement with the current production to talk about the road to becoming a writer and her dedication to queer representation.

You came from an acting background, is that correct?

Yes, I came from an acting background. And looking farther back, I played music. In high school, I took up trombone. Later, I took opera lessons.

So, have you always been demonstrative?

When I was studying music it was a means to an end, as in “let this help me get into college.” I was very adept at it, but it wasn’t until entering college that I began to recognize the arts were good for me.

So what happened in college? What changed for you in terms of how you related to art?

I went to Wellesley College on a political/law tract. I knew that Wellesley had produced some formidable women thinkers, journalists, and politicians. At the time, I was modeling myself after Hillary Clinton, and Madeline Albright, and I loved Diane Sawyer.

But as I was going through my undergraduate program, I began to feel like my skin was tightening. I began to struggle. I was very good at my studies but I was just not the happiest person. I was coming to Wellesley from Southbridge Massachusetts, a blue collar town, and Wellesley College was a big shock for me. I was there on a scholarship. I came from an immigrant family from Nigeria. I definitely had a lot of feelings and thoughts on what it meant to be successful and what a successful trajectory looked like, but I felt no joy in my studies. I was on a path to be a lawyer or political professional without ever questioning if I wanted to do it or not. The question was not “Who am I?” Or even, “What do I want?” I was merely doing what I thought I was supposed to be doing.

I had an incredible Dean at Wellesley who encouraged me to seek out therapy as well as take some classes and extracurricular activities outside of my projected career. She told me that I may very well end up wanting to be a lawyer, but that exploration was an option for me. The extracurricular activity that I picked was opera. Again, I played music all throughout high school but it never clicked in my head that music made me happy.

I already had the ability to read music because I had been playing ensemble jazz trombone all through high school. When I began singing opera, I had a natural instrument, my voice, with a learned musical capacity from playing trombone; I excelled. Between music courses and therapy, I was truly living in my body. I was happier in the rehearsal room than anywhere else. I realized that this is what I liked to do. Then I took an Acting for Opera Singers course, and I discovered I liked acting more than singing. I ended up applying to American Conservatory Theater in San Francisco for grad school instead of applying to law school.

So it was in grad school when you tied your joy to an actual profession?

Exactly; it occurred to me that my life was worthy of that endeavor. I realized I could still help and support my family. I could still do all the things in life I felt that a law degree would provide me, a first generation American with a strong commitment to bolster my familial foundation. I could still do it, while centering my joy. I just had to ensure that I was an exceptional artist to make a living.

How did the jump between acting and playwriting happen?

I graduated from American Conservatory in 2009 and moved from the Bay Area to New York City right in the middle of the recession. Finding work was extremely difficult. There were not a lot of roles that were right for me.

So I began to write. And because I went to school for three years in a program primarily engaged with stage work, a play is what I produced. That play launched my career. Playwriting was another joy that I fell into. Nothing in my life has come to me in a direct way. I have learned to open myself and stand in the center of what I am good at, to lean into what makes me happy.

Let’s talk about your “Ufot Cycle,” I am curious if this cycle is your attempt to disrupt western theater canon by adding a Nigerian experience?

I don’t want to fault the canon that is there; it is just missing some things. In plays written by people in power, and I am going to speak very plainly, plays by white folks, the characters are allowed a kind of multiplicity. The storytelling is pluralistic. The storytelling is wide. They are permitted a variation of narratives. When you are dealing with underrepresented communities, the storytelling can lean towards the narrow. A plethora of narrow storytelling makes everybody think that that’s all there is. A lot of my inspiration for writing the “Ufot Cycle” is to widen out the Nigerian experience. I wanted to add a pluralistic vision to often unseen narratives.

I have a question about the crafting of the cycle. When you wrote the first play about the Ufot clan, did you know it was going to be a nine play cycle? Did you already have all the plays mapped out?

I have it mapped out now; it’s gradually been mapped for the last four years. But in the beginning, I didn’t. When I wrote what would become the first play in the cycle, The Grove, I was totally dissatisfied with it. I went through the editing process and realized that the characters who surrounded the protagonist, Adiagha Ufot, were just as interesting and needed their own specific stories told. I became fascinated by how Nigerians actually got here. What made them come? What were they hoping to gain? Did they want to stay?

Edwidge Danticat has been a big inspiration on this project. I quote her endlessly. I think she is incredible. One of her quotes from her book Create Dangerously, has been a thesis statement for this cycle. I am paraphrasing, “Immigrants are the most imaginative people because they leave everything to create a new everything.”

Have all the plays been written?

No, there are two and half plays that have yet to be finished.

Does having the plays mapped out hamper your creative process?

It actually helps me. I can’t write into the ether because these stories are part of a connective cycle. It is not like August Wilson’s cycle, which does cover a century in time, but not through a singular lineage. These plays are interlocking, so I have to always be aware of how they connect and how one play ripples in time to affect the others. For me, it does not stymie the creative process, but it is challenging. I know Playwriting 101 says “don’t do this,” that it can stall the creative drive, but for me the rule breaking has been fruitful.

You previously mention centering themes of African queerness in some of your plays. Why is it important for you to inject queer narratives into your work?

There is this thought that you cannot be African and gay. I think a lot happened with colonialism and missionary work in sub Saharan Africa that wiped out African knowledge centers where different ways of being had previously been uplifted. I believe these erasures decreased a wider view of what we now call “queerness” in certain parts of Africa. It infuriates me as someone who identifies as a queer woman that there are ideologies that say I cannot be both queer and African. It infuriates me that someone else’s God makes what is actually an organic impulse, taboo.

I have extraordinary hot and passionate feelings about what it means to be both African and queer. I am someone who does not cry often, but I cried for days when the writer Binyavanga Wainaina died because of how powerfully his work held up both Africa and queerness. As someone who identifies as a queer woman, I am not willing to decenter queer narratives from my work. I really hope that the next play of mine that is produced is The Grove, because The Grove is looking right at this issue. It is the story of a young woman who is queer and Nigerian but has a hard time grappling with her queerness. Her ancestral line from way, way back pokes her in the side to remind her that she is perfectly fine as she is…that there is a lineage of women who came before her, who were also as queer as she is.

This interview has been edited for clarity