‘Gideon the Ninth’ by Tamsyn Muir

‘Gideon the Ninth’ by Tamsyn Muir 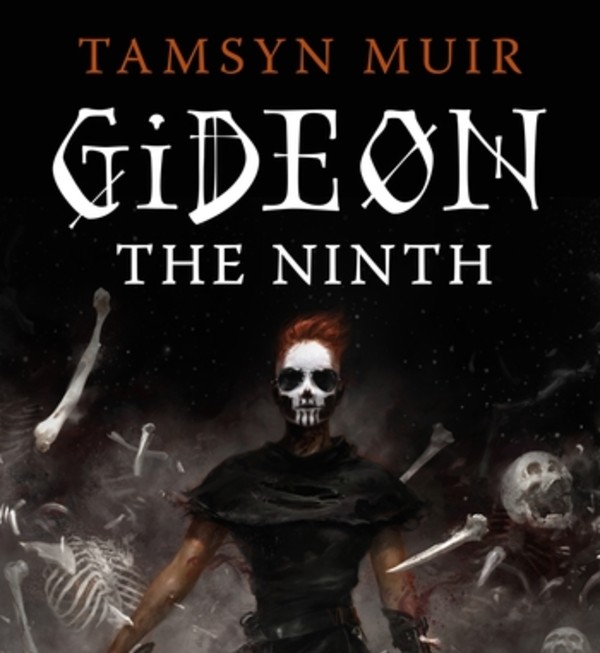 Gideon the Ninth is unlike any other book I’ve read recently. It’s advertised as “lesbian necromancers explore a haunted Gothic place in space!” in the blurb by Charles Stross, which covers all aspects of the complex yet subtle mixtures of genres quite succinctly, and immediately suggested to me that this might be a novel uniquely suited for the tastes I didn’t even know I had, but when it comes down to it, it’s really something you have to read to believe.

The novel–the first in a planned series–follows Gideon, the flame-haired and studly soon-to-be cavalier of the Ninth House, an outcast on a planet of silent nuns and animated skeletons. Gideon wants nothing more than to escape the hushed and dreary tomb where she was orphaned. Since she was six years old, she’s made countless escape attempts, and the novel opens at the start of her final one, a plan quickly foiled by her arch nemesis, the bone witch Harrowhark Nonagesimus, Reverend Daughter of the Ninth House, who has been summoned–along with the necromancer nobles of Houses two through eight–to compete in a series of deadly challenges to become an immortal and serve at the right hand of the deathless Emperor for eternity. The bond between necromancer and cavalier is sacred–One flesh, one end is how the old adage goes–but there’s no love lost between Harrowhark and Gideon, who have been at each others’ throats as the only two youths on their decrepit planet for as long as they both can remember. But Harrowhark can’t fulfill the Emperor’s summons without a cavalier, and Gideon is all she’s got, so she offers Gideon what she’s always wished and worked for–her freedom–if Gideon promises to serve in this final task. It’s an offer Gideon can’t refuse.

When the two arrive planet-side at the haunted palace where the trials are conducted, we’re introduced to a dynamic cast of characters, and the story quickly becomes part quest, part murder mystery. Tamsyn Muir deftly creates layer after layer of intrigue as readers–and Gideon–try to discern who can be trusted, and who is dangerous. More than once, it seems as though the secretive and unpleasant Harrowhark might be the most present danger of all. The novel unfolds at a deliciously slow pace: the bone palace is fleshed out over several chapters, and the qualities of each House’s necromancers and cavalier creates a rich tapestry against which Gideon and Harrowhark define themselves. There is the sickly and sweet Dulcinea Septimus of the Seventh House, weak with bone cancer yet tenaciously clinging to life to solve the mysteries of the challenge in her attempt to become an immortal Lyctor, a servant of the Emperor. There’s the smug and smarmy Third House cavalier Naberias the Third, “Babs” to the twin necromancers he serves, golden Coronabeth, haughty and beautiful, and the Ianthe, her pale shadow, forgotten more often than not. There are “horrible” the twin teenagers of the Fourth House, Jeannmary and Issac, who speak in whispers and are indulged by the warm and goofy Fifth House cavalier, Magnus. And finally, the necromancer who Harrowhark seems to consider her closest rival, Palamedes Sextus of the Sixth House, and his cavalier, Camila, a force of nature who could give Gideon a run for her money when it comes to irreverence for the pomp and circumstance that should exist between necromancer and cavalier, and the sheer force of will and reckless joy she displays on the dueling strip.

Each of the necromancers is skilled in a different type of bone magic, but all are powerful, and none are exactly who they seem. When the competitors start dying, though, the stakes are raised, and Gideon must decipher for herself is she can turn to the one person she’s hated all her life. Can she become a true cavalier to the Reverend Daughter who has made her whole life a misery? Is it wise to trust Harrowhark at all? Does she have any other choice? Muir weaves seamlessly between mystery, intrigue, and quest, and between science fiction and fantasy, to craft the start of a series that rivets and enthralls like the dark and dangerous magic it depicts.

Cory Silverberg : On His New Book 'Sex is a Funny Word' and Sex Education for Kids
'Theatre of the Unimpressed: In Search of Vital Drama' by Jordan Tannahill
'The Wonder' by Emma Donoghue