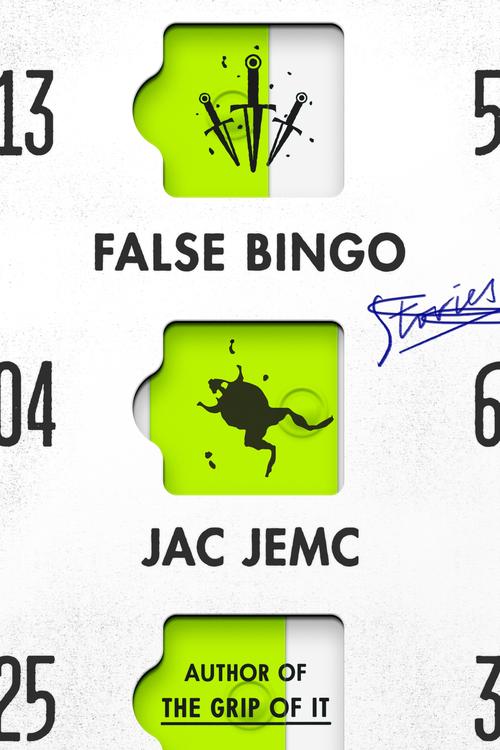 False bingo (n.): The dud epiphany, the premature eureka, the lightbulb that flashes once and shatters. It isn’t yet an idiom, but the Chicago writer Jac Jemc’s latest collection of stories makes a sustained case for the concept’s utility. Though most originally appeared in other publications, these 20 brief tales conduct a smoothly coordinated investigation of the human tendency toward blind spots and bad assumptions.

Early on, there is “Delivery,” narrated by a pair of siblings who persist in treating their father as a quirky old guy in his man cave as he constructs a bizarre basement empire filled with home shopping network purchases. “Strange Loop” gives us an ex-con who takes up taxidermy to take his mind off his time in prison and what sent him there. Many of Jemc’s protagonists are beset by guilt that’s simultaneously justified and misguided. She opens with an epigraph from Hannah Arendt noting that “confessions of collective guilt are the best possible safeguard against the discovery of culprits, and the very magnitude of the crime the best excuse for doing nothing.”

At one point Jemc pays explicit homage to Shirley Jackson, and her tart economy of style mines a vein of American storytelling that stretches back to O. Henry and classic noir. An occasional narrative twist feels overly neat, creating a structure too airtight to support much life. But more often, she turns her utter command of her materials toward wild and stirring ends. “Get Back” is a gale-force gust of language, its nameless narrator dealing florid deaths and disfigurements (“found him daily and burned his house down;” “futzed up his nethers with weird knives”) to a flood of men.

Elsewhere, disaster is stealthier. “Don’t Let’s” renovates the haunted house story by seizing on the rich fictional potential of the Airbnb experience, replete with casually menacing notes like “We’ve never experienced crime, but we also can’t be held responsible for theft of any of your belongings.” In “Hunt and Catch,” the low-grade chaos of a bus commute through Chicago builds into either a panic attack or something more sinister for the office worker at its center.

Not that the mood is always ominous. One deliciously mean story finds the protagonists fighting merely to extricate themselves from a friendship with the “Board Game Couple” (cheap hummus, cat-hair-covered furniture, inability to lose gracefully). It’s one of Jemc’s funniest pieces, but as the pair tries and fails to audition replacement pals, one fears that they, too, may be sliding toward the embittered loneliness that swallows many of her less sympathetic characters.

There are no wolves at the door. […] No revenge is exacted. No combat. You might argue the hidden conflict is any resistance society might place upon this story, attacking what is being presented as calm, peaceful, serene, and finding its faults, insisting it must be more complicated, that something this complex cannot be executed so simply, but you will not see any of that here. The people in this story surround themselves with those who accept and nurture them.

She plants several little utopias within the pages of False Bingo, sowing metafictional mischief with curiously untroubled plots and characters. The most touching in this genre is “Kudzu,” in which a mother raises a daughter alone in a forest of vines and teaches her all she needs to know about ecology, colonization, and “how even the best-intentioned people sometimes stopped short of looking for the truth.” This child-rearing method produces not a helpless Rapunzel, but a cool lesbian teenager whose first girlfriend interprets her unworldliness as next-level hipster cred. In “Loitering,” a woman at rock bottom is inspired by a kindly bartender to pull herself together, find a new job and pursue her crush from the co-op—and it all seems to work out.

In these stories, the dread that hums beneath the rest of False Bingo is replaced by a whisper of melancholy. Perhaps it is, on balance, right to expect disaster, but what do we sacrifice by always compelling our attention toward the shadows? What chances might we be missing—even now—to unhex ourselves, and set our fates on a new and better course?

'The Lavender Menace: Tales of Queer Villainy!' edited by Tom Cardamone and 'Al-Qaeda’s Super Secret...
'Girls I've Run Away With' by Rhiannon Argo
'The Lotterys More or Less' by Emma Donoghue and Illustrated by Caroline Hadilaksono