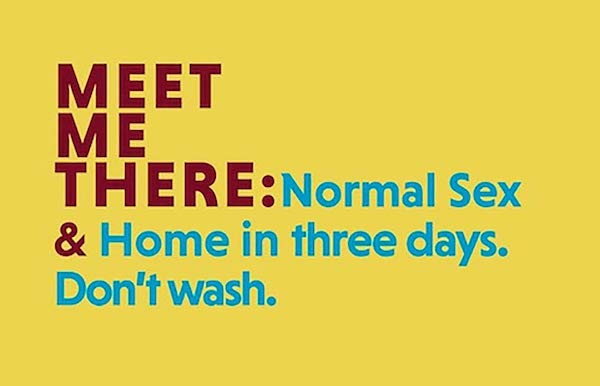 These are the final lines of the poem “The Roads,” which Samuel Ace places before the reprint of two earlier collections of his work in the book Meet Me There. “The Roads” was first published in 2018 in the collection The Equalizer: Third Series, edited by Michael Schiavo. Those words echo, the speaker calling to silent air to a person “perched inside another time.” The apparent joint incarnation “breaks the world.” It is a powerful statement.

Meet Me There gathers two collections by Linda Smukler, now Samuel Ace: Normal Sex and Home in three days. Don’t wash. Published by Belladonna*, this collected reprint is part of the publisher’s Germinal Texts series that “trace feminist avant-garde histories and the poetic lineages they produce.”

Both of these collected works are fundamentally about lesbian love and desire. Normal Sex challenged some of the normative views of lesbian sexuality that predominated in the 1980s. In Home in three days. Don’t wash., Ace/Smukler narrated a passionate affair between two women. Both books embraced a vision of sexuality that was broader and grittier. The introduction to this new Belladonna* collection is framed as a series of correspondence between Sam to Linda. In the introduction, Sam states that his work challenged “the sweet labia- and flower-filled sex I found in the work of so many lesbian poets in the 1980s and early ‘90s. Ace/Smukler rather gives readers poems that grapple with sexual abuse, gender non-conformity, and lesbian desire. In “Out,” the poet writes, “I could go out tonight and pick up a woman who only/ wanted to make love to me.” The poem concludes, “I would let her throw me in the car and ride away with me     one / hand on the wheel     the other between my legs.”

Perhaps the most moving thing about this collection is the letters between Linda and Samuel, the same person, of course, but living a life at different times with different affections, different investments, and different expressions. Yet the naming between the two of them as different and still the same is powerful and moving. Each time I have read these letters composing the introduction, tears well in my eyes because of the honesty about one writer’s life and past and path. Ace writing to Linda honors what was, what she did with her words, how she lived, what her political investments were. There is no denial of her life and work, rather there is an understanding of her connection to breathe life into Samuel and she honors and appreciates that in her letters to him.

This collection recognizes that life is long, that expressions of the self change over time, that the world around us changes and we all adapt to that change of world, to borrow Adrienne Rich’s phrase. While Ace suggest in the opening poem that “our incarnation / breaks the world” in fact it does not. The incarnation of Ace and Smukler, their shared work and words makes us stronger.