‘The History of Living Forever’ by Jake Wolff

‘The History of Living Forever’ by Jake Wolff 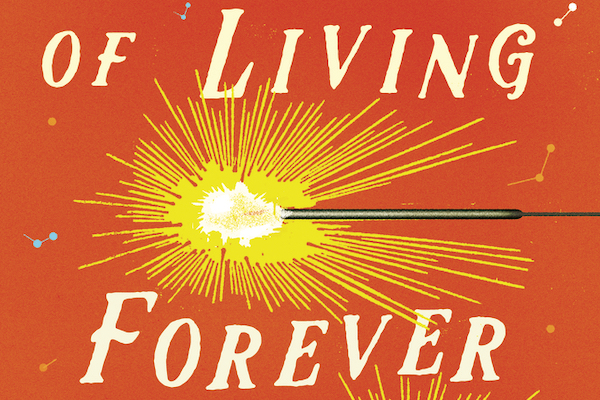 Jake Wolff’s beguiling debut novel The History of Living Forever is a science fiction story, a gay romance, and a Hardy Boys mystery all rolled into one. It’s many more things, too, partly because the ultimate moral dilemma of its teenaged protagonist lifts the book above any specific genre. But at its core, Wolff’s book does what all good novels do: It makes an unfamiliar world feel familiar. It moves us with beautifully limned characters. It takes us on a wild ride of twists and turns that place us in the past, present and the future.

At the center is Conrad Aybinder, a high school student whose life is upended by the sudden death of his chemistry teacher and lover, Sammy Tampari, “the kind of guy who uses semicolons in text messages.” (Whether Sammy dies of an overdose or suicide is one of the book’s many mysteries.) Conrad was having an illicit affair with Sammy and his passing leaves the sensitive student reeling. After Sammy’s death, Conrad discovers his notebooks, which are filled with disjointed pieces of information about his search for an elixir of life. It is left to Conrad to pull these pieces together and complete Sammy’s work. What could have been just a page-turning mystery is given poignancy by the stakes Conrad and his friend RJ have in discovering the elixir: each is out to save a family member from dying. The personal stories of Conrad and RJ encourage us to consider the ethical side of medicine we struggle with today. Who deserves to live? How much should we sacrifice of our own lives to advance medicine for the benefit of others? How long do we want to live?

Wolff consistently grounds the book in the science of the boys’ quest. He even presents us with case histories of real people, starting with Ge Hong, fourth century scholar and first practitioner of traditional Chinese medicine. Especially in its second half, the novel is immersed in the experimental details of the potion. For those whose interest in science is limited to the broad strokes of political discourse (climate change, genetic research), these descriptions may seem to bog the story down somewhat, but they’re essential to give credibility to Wolff’s fantastical plot.

Emphasizing science allows Wolff to wrestle with some weighty questions about how we live our lives: Do we follow the hard data of science? Our hearts? We ignore either at our peril, Wolff seems to tell us. Conrad reveals that his mother died when he was ten years old in a house fire caused by a burning cigarette. The fire inspector told the family that she “did everything wrong: she went up when you’re supposed to go down, she traveled toward the heat and not away from it.” The message is that she might have been spared if she had only obeyed the laws of science. And in a witty Author’s Note, Wolff reminds us not to play with science: “Every recipe in this book, if ingested, will kill you. Every single one.” He ends with the cliché, “Do not try this at home.”

In one of Sammy’s journals, we discover that he believes science might well serve the needs of our emotional well-being:

There is some way to treat everything at once…what the Greeks called panakeia, the all healing. My goal is not to live forever but to live happily—to figure out what happiness means.

Perhaps what’s most impressive about the novel is that most of the time it is able to address these lofty issues without losing its ability to entertain. There’s certainly darkness here. The possibility of death hovers over most of the pages. And Sammy’s relationship with Conrad is fraught with the teacher’s disturbing manipulation. In the end, however, The History of Living Forever might be a nice palliative for those grieving the end of The Big Bang Theory, or for those who simply appreciate good writing.

'The Desperates' by Greg Kearney
'Fearful Hunter' by Jon Macy
'Alexander McQueen: Blood Beneath the Skin' by Andrew Wilson