‘How We Fight for Our Lives’ by Saeed Jones

‘How We Fight for Our Lives’ by Saeed Jones 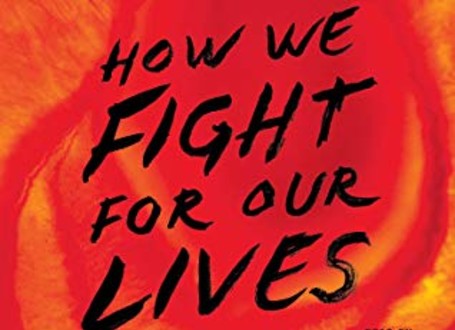 Given his recent BuzzFeed celebrity–he was co-host of AM to DM for BuzzFeed News, as well as a former executive culture editor for the tech behemoth–we might forget Saeed Jones is, first and foremost, a poet. (After all, his debut poetry collection, Prelude to Bruise, was a finalist for the 2014 National Book Critics Circle Award.) But if we’d forgotten, we’re immediately reminded of the attention Jones brings to every word of every sentence of every paragraph from the beginning of his debut memoir, How We Fight for Our Lives.

“Just as some cultures have a hundred words for ‘snow,’” Jones writes early in How We Fight for Our Lives, “there should be a hundred words in our language for all the ways a black boy can lie awake at night.” The generative failure of language–here instantly recognizable and yet gorgeously specific–brings us Jones the Poet transforming into Jones the Lyric Memoirist of Youth. What subsequently follows is no simple bildungsroman, but short, lyric chapters of growing up that move–dreamlike, sometimes nightmarish–back and forward and back and forward, circling in on themselves like the Buddhist chants we witness Jones and his mother performing throughout the book.

Those chants are not the only thing Jones and his mother share. As his grandmother would say, they also share a worldliness, and that worldliness gives us, the lucky readers, a story we’ve yet to hear: that of a black family, a gay son and his single mother, practicing Buddhism in the suburbs of Dallas, but dreaming of the world beyond. Of the summers he spent with his grandmother in Memphis, Jones writes, “Growing boys devour electricity, fully stocked refrigerators, pantries and patience, and Mom couldn’t afford the cost when I was out of school.” This mother is endlessly described as elegant, at once ever present and always elsewhere, a mystery in a Delta Airlines uniform the book seeks to unlock. But that mystery is perhaps the biggest inheritance Jones receives from her. “Of course I wanted to see the world, to experience its fullness,” he explains, then confessing, “I wanted to devour the world.”

Of course, too, that world was not always kind to this young man finding his way in it. New Years Eve 2007, as Barack Obama was running for president and the world seemed on the precipice of so much hope or devastation or some combination thereof (I’m still not sure which), Jones found himself hiding away in Phoenix, far away from Western Kentucky where he was attending college. “I knew how to be interesting,” he explains adding, “There was power in being a spectacle, even a miserable spectacle.” At midnight, he finds himself without anyone to kiss, until he finds a boy, Daniel, left blue-balled by a girl. Daniel leads Jones back to his apartment and locks him in a room, where at first they begin the fumbling of having young drunken sex, until Daniel begins beating Jones senselessly. Yet, even in this moment, Jones, ever the poet, reaches to understand and brings us to a complicated empathy: “It wasn’t like he was beating me, exactly. He was beating the desire I had brought out in him, shoving it back down to where it usually hid… when I looked up at Daniel, I didn’t see a gay basher; I saw a man who thought he was fighting for his life.” Thus the world becomes an endless loop of devouring: us devouring it and the world devouring us in a great circle, chantlike, until the blur is a stunning, living mess. Jones book is a teacher, in that way, and we are lucky to be its students.

There is so much to love in How We Fight for Our Lives, I’ve struggled to narrow down this review, which could easily just be a love letter for this book I simply couldn’t stop reading. And though the prose is seemingly effortless, one of the things most effective (and affective) in Jones’ memoir is his refusal to hide the hard work a writer of his caliber must undertake in order to succeed. After taking a job teaching high school in Newark, Jones describes a typical day in his life of balancing students and family and X, Y, Z, with being a writer:

As usual, after I dismissed them for lunch, I’d pull out the lunch I packed for myself and a poetry collection to read while I sat at my desk. I did this every day during the week; I worked on my poems for forty-five minutes every morning for fear that if I didn’t make a constant effort, I’d look up one day and five or six years would have passed without me having published a single poem, much less an actual book… This was the routine. I needed to use all the time I had. I needed to keep kicking to stay afloat.

How We Fight for Our Lives is a primer in how to keep kicking, in how to stay afloat. I am left challenged by it, but also rising to meet its challenge. It is one son’s letter to his mother, but also the world. Thank god we get to be part of that world with Saeed Jones’ writing in it. I pray this memoir isn’t his last.

Reading about the Adolescent Experience, a Look at Teen Bullying, and Recent LGBT Art Exhibitions
'The Lady's Guide to Celestial Mechanics' by Olivia Waite
'Fanny & Stella: The Young Men Who Shocked Victorian England' by Neil McKenna