‘The Stonewall Riots: A Documentary History’ by Marc Stein

‘The Stonewall Riots: A Documentary History’ by Marc Stein 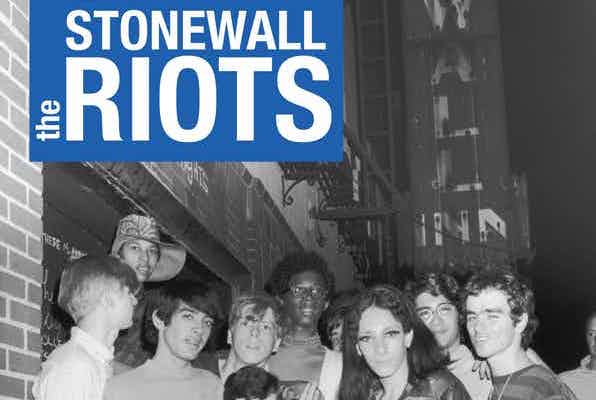 In The Stonewall Riots, author and history professor Marc Stein provides a thorough education about Stonewall and the events that surrounded it by compiling an extensive—you might say overwhelming—anthology of articles from queer, mainstream and alternative publications published between 1965-1973. Stein provides details and context to an incident that seems to be largely understood in only broad strokes: Queers got mad, they revolted, and now we have gay liberation. It’s an iconic story, an important story, but history is not best understood in broad strokes. You put the details together to understand the whole. And like the best archaeologists, Stein unearths forgotten aspects to further our understanding.

In addition to Stonewall, the book covers the bar scene that preceded it, protests before Stonewall and after, and post-Stonewall marches. Stein shows that activists were doing important work in the months and years before and after Stonewall. That the homophile movement or the August 1969 Kew Gardens rally or Lee Brewster are not known by the larger public does not reflect on their importance, only on how poorly educators and the mass media treat queer history. And yet even with all the “new” facts Stein presents, he understands the limitations: “We can never re-create or revisit the past. Even if we could travel back in time and transport ourselves to the Stonewall Inn in the early morning hours of 28 June 1969, our experiences and accounts would likely differ,” he writes, due to a whole slew of factors.

But we can certainly attempt to understand what occurred:

LGBT people were structurally and systematically oppressed in American society, commonly treated as criminals by law, sinners by religion, diseased by science, defective by business, deviant by popular culture, and faulty by family and friends. […] The homophile movement […] created the pre-conditions for revolt. The long history of bar-based resistance practices created a repertoire of rebellious responses. Other social movements provided revolutionary inspiration and influence. And the combination of heightened expectations and dashed hopes that many felt as the country transitioned from a period of liberal reform to one of conservative backlash—and that LGBT people experienced in the context of a new wave of police raids, violent killings, and local vigilantism created an explosive situation that erupted on 28 June.

Stein focuses on the gay bar, a place where queers could be themselves, while perhaps also quaking in fear. “Even in cities where the same bars have existed, virtually without interruption, for a large number of years, there is a lingering expectation that the next door opening might bring the police,” wrote Clark P. Polak in Drum in 1966. An article called “Mafia On The Spot” from the New York Hymnal highlights the exploitative, oppressive, and depressive nature of the Mafia-run bar—you might not have been allowed to enter if you didn’t look a certain way, there was a lot of darkness to cover up filth, you might have seen police. It is not a huge stretch to theorize that the anxiety and frustration of dealing with the bar scene is part of what led to Stonewall.

A New York Daily News article sums up why Stonewall happened this way: “It was a raid. [Police] had a warrant. After two years, police said they had been informed that liquor was being served on the premises. Since the Stonewall was without a license, the place was being closed. It was the law.” But in that same article, one source from the gay community named Nan said she believed it had to do with the payoff system going bad. Of course, this is something the police say was “not likely” in Dick Leitsch’s article “The Stonewall Riots: The Police Story,” published in Mattachine Society of New York Newsletter.

One of the most interesting parts of the book is the way it highlights how the less militant and more militant aspects of the movement operated. Consider Mattachine Society of Washington, D.C.’s “Rules for Picketing”: “Dress and appearance will be conservative and conventional.” The Stonewall participants did not care how they presented themselves. Stonewall would probably not have succeeded on the level it did if the participants cared about how they looked, if they played by the old rules.

What happened after Stonewall? The idea that Stonewall solved everything is false—as the chapter “Political Protests After Stonewall” shows and as we just know from history. The media, the law, psychiatry, and businesses still had to be challenged.

Surprisingly, given its subject, The Stonewall Riots does not always provide a dramatic reading experience—the book’s primary aim is to inform, so it can be dry. Choosing to publish the documents as they are versus using them as reference material to create an enticing narrative is a choice that has its disadvantages.

But being unmemorable is not among them. What really stays with you is how many factions of society banded together to make queers hate themselves and what strength it took to fight back. By giving us a broad view of history, Stein brings Stonewall back down to its proper size. No longer is it this huge event that overshadows everything else, but one of a series of important happenings that took place during a unique, productive, chaotic, sometimes sad, sometimes comical, and ultimately exhilarating era.