Tiq Milan on the Legacy of Original Plumbing Magazine

Tiq Milan on the Legacy of Original Plumbing Magazine 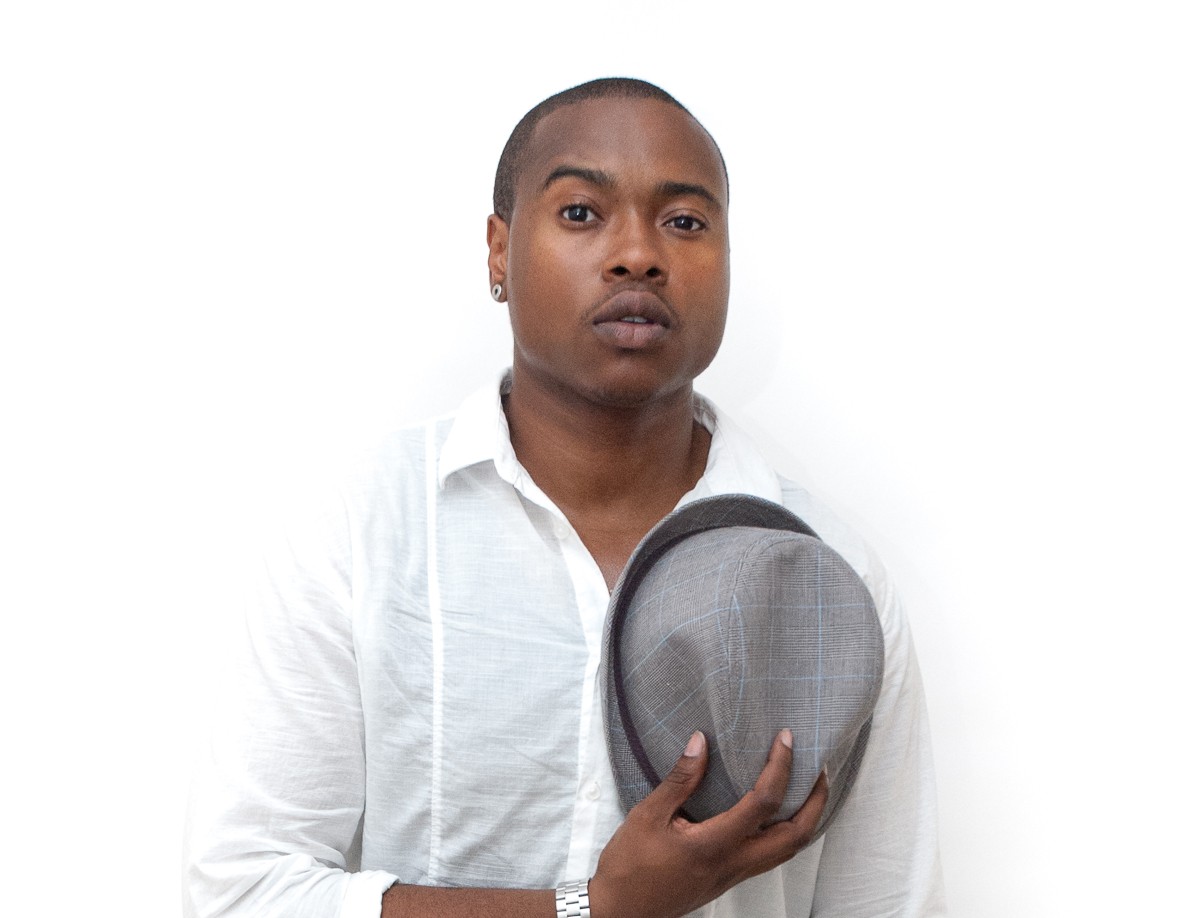 Independently published from 2009 to 2019, Original Plumbing grew from a Bay Area zine to a nationally acclaimed print quarterly dedicated to trans men. For nearly ten years, the magazine was the premier resource focused on their experiences, celebrations, and imaginations, featuring writing on both playful and political topics like selfies, bathrooms, and safer sex; interviews with queer icons such as Janet Mock, Silas Howard, and Ian Harvie; and visual art, photography, and short fiction.

In celebration of the magazine’s ten-year run, this essential collection compiles the best of all twenty issues.

In this excerpted foreword from the book, noted LGBTQ advocate Tiq Milan writes of the impact OP had on his own sense of self.

In 2004 I had a moment of recognition that made me realize I wasn’t alone. Up until then, I didn’t know that being a transgender man was possible. I knew that I was unhappy and self- conscious, humiliated when I was read as female and disheartened that I couldn’t find the space to be who I needed to be. I was masculine presenting but still being seen as a woman, which made me feel invisible and wrong. At that time, I understood gender to be static and set in the stone of genitals or gender roles. I didn’t know gender could be fluid—transforming and self-determined by anyone who dared to define themselves outside of expectation or performance—until I met Nico.

It was a slow Friday afternoon, and I was working the happy-hour shift at Meow Mix, a lesbian dive bar on Manhattan’s Lower East Side. Mix was small and dark, with just a few barstools around the dance floor, and usually smelled like old beer with a faint hint of vomit. In walked a short guy with a dirty-blond goatee and a stack of flyers. He had shy, squinty eyes and quarter-sized gauges in his ears.

“Hey, I’m throwing a fundraiser here next week. Mind if I put some flyers on the bar?”

He spread them out across the sticky black bar and tacked a few up on the wall. I grabbed one to see what it was all about. On it was a photo of the shy guy at the bar, shirtless with his arms across his chest, smiling and looking off into the distance. The headline read:

Top surgery? What the hell is that?

Back then we didn’t have the same decorum and affirming language around transgender people like we do now.

He giggled and politely corrected me. “I’m transgender.” 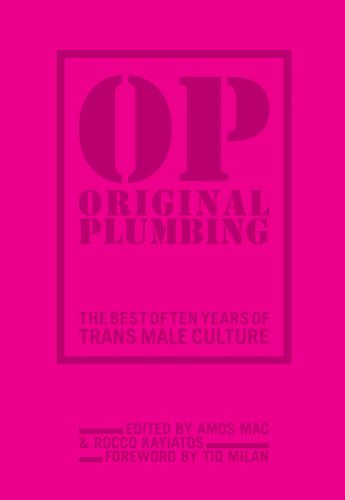 That day changed everything. The veil had been lifted and a path to manhood emerged. There was a way for me to be the person I saw in my mind and felt in my heart. After that fateful meeting, I was committed to finding transmasculine community. I went to support groups for trans men in the Bronx and invite-only meet-ups in Brooklyn. I talked to hundreds of transgender men of color in Yahoo chats and Facebook groups until the wee hours of the night to feel seen, reflected, and real. We asked one another questions, not to invalidate people’s truths, but to be complicated by them.

We shared information on doctors and surgeons. We talked strategies of coming out to family and friends, being stealth or disclosing at work. It was vital information that we weren’t getting anywhere else, especially for the guys who weren’t in large progressive cities like New York or Los Angeles. We needed this online communiqué because the discourse around LGBTQ people was still mostly gay and lesbian. Transgender people, especially trans men, were extremely marginalized, as organizations focused more on overturning sodomy laws and passing marriage equality than protections for trans folks.

At the same time, transgender men have been working in the background of human rights movements. We’ve toiled away in LGBTQ organizing, fighting for our rights to have access to safe, affordable gender-affirming surgery and nondiscriminatory health care. Trans men like Kylar Broadus, Jamison Green, and Imani Henry have been working for the visibility of transgender men and nonbinary folks when many gay and lesbian organizations weren’t creating space for us or prioritizing our needs. We’ve been vocal about a trans guy’s rights to birthing, parenthood, marriage, and the option to be low or no disclosure if we choose. With little to no visibility, we’ve been here since the beginning. Fighting, scratching, and clawing to be seen and be respected.

We’ve also always been hot as fuck: beautiful, fluid, and multidimensional—complicated and provocative. Somebody needed to take notice and give transgender men the photo shoots and good lighting that we deserved. Photographer and writer Amos Mac teamed up with artist and producer Rocco Kayiatos to do just that. Together they created Original Plumbing in 2009, the only quarterly dedicated to transmasculine culture and aesthetics. They showcased trans guys of different body types, races, and a multitude of masculinities: some femme, some gay, some macho; leather daddies and family men. Manhood was our playground of possibility—not some stiff notion that could be undone with the slightest of ease. The beautiful thing about transgender men is that we make masculine identity our own. We make it layered and complicated.

Being transgender isn’t the center of every trans guy’s identity, but it creates a specific lens for life, community, and self-awareness. Although being a trans person comes with its share of sacrifices and hardships, there is freedom in being self-determined in how your manhood can show up in the world. We create new blueprints of masculinity and remix the old ones. Cisgender masculinity is often limited to a binary set of experiences and has been starved of complexity and flexibility. Original Plumbing reached into the nuances of self-determined masculinity with stellar photos and in-depth interviews.

Being trans is movement building, and our aesthetic is a boundary-pushing protest in and of itself: the audacity to be sexy—the chutzpah to believe in the ability to create manhood and masculinity that is ours—is a revolutionary act. In every issue, trans guys from Brooklyn to Germany could feel seen, validated, and a part of something bigger than themselves. Original Plumbing was the example that so many young trans guys out there needed. It was the zine that made them know that they weren’t a freak or wrong or unworthy. OP’s every feature and issue recreated moments of recognition and possibility like the one I had that sleepy Friday afternoon in an empty bar, but for thousands of transgender men all over the world. There is a shared experience of coming out, figuring it all out, becoming who you were meant to be, and paying it forward to the next guy who is misunderstood and isolated. Many of us have been that isolated kid. OP was proof that we could live and be beautiful and loved. It also brought the global transmasculine community together under common experience while highlighting our individuality in a way no other publication has been able to duplicate. The guys featured in the issues of OP came from all walks of life: Artists and writers. Skateboarders and activists. There were scores of trans men who were living their best lives, showcasing the unapologetic ownership of an identity and authenticity many of us would have literally died without.

In 2010 I was invited to be part of issue five, the Fashion Issue. I’d seen Rocco perform and was always impressed with his work, so it was an honor to participate in such a groundbreaking publication and I jumped at the chance. It was also to be my first photo shoot as a transgender man. I knew that if there were any publication I should come out in, it was this one.

I’d done shoots and interviews before, but being in front of Amos’s camera was different. He was open and smiling, and seemed just as excited as I was to be doing the shoot. I didn’t have to worry about intrusive questions about my body or traumas around coming out. Amos and Rocco understood that my transness was the lens that influenced my style and swagger rather than the focal point of my expression. The photo shoot was quick and seamless. The photos were gorgeous. I still have one hanging on the wall today. It was one of my proudest moments as a writer and public figure.

The issue release party was unreal. It was sweaty and crowded, and had Brooklyn bursting at the seams. There were hundreds of people dancing and drinking. Go-go boys and girls grinding on top of speakers. Groups of transgender and genderqueer folks posing under the bright lights of a photographer’s camera flashing in the darkness of the dance floor. Couples and “throuples” making out in corners, hugs and smiles all around. People of all gender identities and of every hue celebrating that night like it was their last.

Most folks take for granted the importance of being reflected. They don’t give a second thought to the power of representation or, conversely, the implications of being rendered completely invisible at the mercy of people’s imagination and misinformation. To be reflected in media and culture, in a way that is authentic and true, gives us the space to dispel whatever myths or stereotypes someone may have about transgender people. It invites our allies to understand who we are and do their part in shifting the cultural landscape toward acceptance and inclusion. Visibility also sends signals to other trans folks who have been ostracized by family or forced to be no disclosure under threat of violence and discrimination. Original Plumbing was a way of telling other guys that we are indeed living, loving, and thriving all over the planet. OP was the original celebration. It affirmed transgender masculinity in all its modes and possibilities. It substantiated the cool confidence of individualism that so many of us walked with in the world. We shook up the boring binary ideals with our genderfucking raucousness of kinky pansexuals. We were different. Our gender was couture and sexy.

Amos and Rocco captured our good side. They were the first to understand transmasculinity not as a bland copy of cisgender men but something new, deliberate, and, dare I say, better. They saw the culture we were shaping and the new inroads to manhood we were creating. What they did with Original Plumbing was monumental and will be an iconic piece of LGBTQ history for decades to come.

A Leather Conversation with Sassafras Lowrey and Sinclair Sexsmith
'Gender Outlaws: The Next Generation' ed by Kate Bornstein and S. Bear Bergman
Read This! An Excerpt from Nepantla: An Anthology Dedicated to Queer Poets of Color