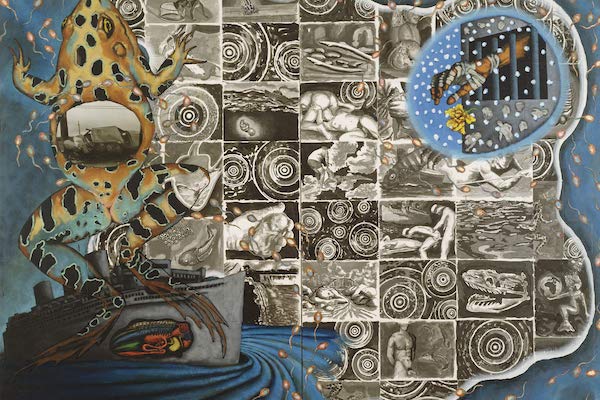 To enter the world of Brian Teare’s Doomstead Days is to enter into an experience where the binary between world and body dissolves almost completely, “to vanish outward,” as Teare says.

In this, Teare’s sixth book, he uses his astonishingly precise verse to elucidate what he thinks is perhaps the greatest cause of our current environmental crisis: the ability for humans to see themselves as somehow separate from the world. This artificial delineation has been the frame over which some of the greatest tragedies of humanity have been built including imperialism, war, genocide, and slavery. And while Teare interrogates all of these in Doomstead Days, the book itself is undoubtedly a new and essential addition to the growing library of eco-poetics.

But for all the weight these poems carry in content, they are deft and stunningly easy to lose oneself in. The book is comprised of eight poems varying in length from five pages to fifty. The poems take as their inspiration nature and the natural world. But do not be fooled, this is no idyllic romp through fields. Teare’s is a “landscape / where purity isn’t possible” (“Headland Quadrants”). He writes a polluted pastoral where “a tarry charred horizon / drew the sun down, blunted the light.” For Teare the 21st century pastoral must be seen as an apocalypse-in-process. Like John on Patmos he confirms for us, “yes, I was thinking / we live without a future [….]”

This non-future seems to take a few forms (the point of no return, the intentionally unforeseen though predicted), but Teare seems most interested in a kind of eternal return as non-future. His use of fixed syllabic counts in poems like ”Clear Water Renga” and “Toxics Release Inventory (Essay on Man)” really highlight what it feels like to be within a cycle. And what is human-made disaster but a cyclical tide flowing in an out, pushed and pulled by the gravity of humanity’s moon-sized ego. It is the ambivalence fueled by the comfort we find in patterns, even patterns that establish the lexicon from which we write the last chapter of the world, which allows us to use the world up without remorse.

But it is not really a universal, human “we” that’s done this to the earth is it? Teare acknowledges this, “It challenges the white mind // to look at this coast / & think this is a ruin [….]” In surveying a landscape after an oil spill, Teare is forced to account not only for the ecological tragedy of whiteness before him (the apathy that allows a white ruling class to see no reason to change the most predominant national energy source to prevent massive oil spills) but the historical tragedies of whiteness (which he outlines here as the “displacement, European / disease, slavery, // & assimilation, few / members of the tribe survived” that ceased the seasonal shift from hunting to fishing of Miwok tribe native to the area) (“Clear Water Renga”).

And what is it that gave Teare, as a white person, a window into this realization? He tells us:

We see other occurrences of what Teare outlines as the “local real.” “The war’d been on / all those years but not so close / I could walk to it.” And we see the intensification of this as Teare experiences proximity to a wildfire “its smoke staining my snot black, / meaning, I think, the local // real.” But disaster reaches beyond the human. As a bird in an oil spill cleans itself, Teare says the bird’s cleaning is “gesture gently carrying / toxins from feather to beak, // from outside in [….]”

In looking at the dead body of a fox in the snowy hills above the Wissahickon, Teare notes that “its slit skin reveals / a little hellscape, // its interior / some kind of diorama [….]”

These passages illustrate quite dramatically that landscape is not like the body; it is the body. Or perhaps, any body within a landscape comes to embody that landscape in time. The porous nature of the relationship between body and world leads to a kind of osmosis of place into the body and body into place.

And sometimes this kind of osmosis is forced as in the cases of ecological imperialism embodied in, “fraught occupation flowers / non-native clover / & rye grazed off-trail by elk / calves & their mothers.” And even more ominously in these two pages from “Headland Quadrants”:

camouflage the army
planted to hide the fort

the soldiers’ bodies
into the landscape

“Our job is to be // the afterimage / of history,” seems to extend to every living being for Teare—plants, animals, the earth—but most of all himself.

the world’s flesh meets my flesh;
_____I walk as if I could
undo the human self

A kind of Omega Man walking through the world awaiting the imminent arrival of the apocalypse, Teare’s landscape contrasts with more class American landscapes—James Olson’s idea of place as those who live there, those who have stories to tell of where they’ve lived comes to mind. Teare’s landscape holds a history as a body holds sickness. The key to treating any sort of illness is not the denial of the illness, but the acceptance of its presence in the body. We need to be able to look at what we have wrought, the great tragic trash heap of landscape that we have built and begin “to see aftermath / as the start of thought.” Which is also the start of at least some small hope for us.

Doomstead Days exhibits the very best virtues of Brian Teare’s greatest work. Each poem’s form is precise without being fussy, the book’s focus is of universal import, its voice thoughtful and expansive with a warm intellectual flame at its center. When you pick up your copy of Doomstead Days, and I can’t begin to tell you how much I recommend doing that as soon as possible, do yourself a favor—read every word of it aloud. Let each word find a home in your space and so, according to Teare, in you. It will heal you. Truly it will.

'Dear Prudence: New and Selected Poems' by David Trinidad
A Poem by Nathan Blansett
“I’ve already said too much”: Sylvia Byrne Pollack’s Risking It and the Power of Poetic Compression