‘Work!: A Queer History of Modeling’ by Elspeth H. Brown

‘Work!: A Queer History of Modeling’ by Elspeth H. Brown 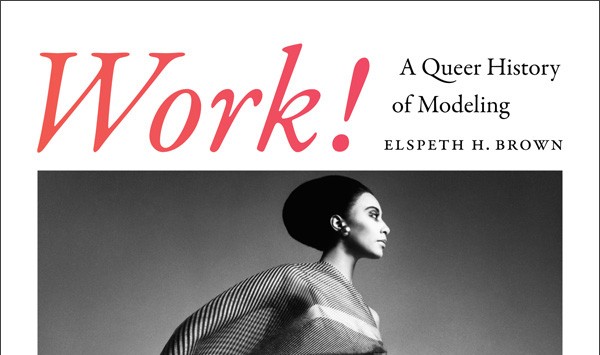 There’s a memorable moment in the early seasons of America’s Next Top Model, where host Tyra Banks, in encouraging the contestants to embrace their sensual side, says “most of modeling is acting like a ho, but making it fashion,” while attempting a mix of supposedly sultry and editorial poses while sitting behind the judges’ panel. At first Tyra’s thought process seems a bit abstract, but after reading this book, the meme-able phrase stuck with me. Modeling is the work of creating an image, often through understanding the concepts of beauty, sex and sensuality within societal boundaries. Despite the mild absurdity of this introduction, America’s Next Top Model is actually not far removed the history and discourse examined in Brown’s text.

Work!: A Queer History of Modeling examines the commoditized public sexuality or para-sexuality constructed through the labor of models, photographers, designers, and other creators. Brown details the networks of queer individuals and sensibilities that, ironically, have contributed to the imagery designed to inspire mass consumer desire. The book illuminates the various negotiations of people represented by the industry, both those outside of it and those participating within it.

Contemporary modeling’s history began in the early 20th century with changes in advertising and advances in photography allowing for the fashion industry shift away from illustration and towards the employment of models to showcase attire. Brown introduces photographer Baron Adolph de Meyer, whose work showcased a camp theatrically, helping to create an aesthetic language of luxury through the decorative excess of this photos.

The first models were working class women, some of whom supplemented income through night work. However, with the creation of the first modeling agencies, the industry soon shifted towards “respectable” middle-class white women or those who could perform the image of such. This construction of “spectacular femininity” (emphasis on spectacle) would be further developed through showcases, whose choreography appropriated African American performances or taught by those barred from sharing the stage, such as performer Ethel Williams. Concurrently, similar revues with a black cast and crew, entered to the discourse of the respectability politics of the time.

The book continues with a review of the individuals and aesthetics that defined the interwar period. Brown highlights George Platt Lynes to showcase examples of the white queer networks that influenced culture and the queer sensibilities that shaped work through subtext. Post-World War II, an African American consumer market emerges, leading to the creation of magazines such as Ebony and Jet as well as modeling agencies. However, African Americans attempting to work in the “mainstream” would have to contend with being asked to embody stereotypes and/or rejection from major modeling agencies.

The final chapter examines the 1970s, when the west was having a sprawling cultural conversation about artificiality, realness and authenticity. Models of color Naomi Sims, Donyale Luna, and Kedekai Lipton worked to construct versions of popular glamour independent of whiteness. Artists like Andy Warhol embraced the put-on constructions of exaggerated femininity. Meanwhile, a counter-reaction to this celebration of heightened artifice lead a number of feminists to embrace an ideology based on biological essentialism.

In the epilogue, Brown returns to a figure introduced in the prologue: Tracey Norman, a trans woman who served as the face of Clairol’s “Born Beautiful” campaign. Norman was outed at a photo shoot effectively ending her modeling career. Many years later, after a profile in New York magazine, she again would become the face of another Clairol campaign, “Color As Real As You Are.”

Brown’s decision to discuss Tracey’s story to bookend the narrative is important for two reasons. One, it recognizes the labor of a person who was, until recently, rendered invisible by the industry and society-at-large. It also reframes the readers’ initial understanding of the context she was situated in, with new insight gained after reading through this obscured history of the profession.

This is one example of how thoughtfully Brown has constructed this work, which gives a thoughtful framework to many intersecting fields of study. The study of modeling in America is the study of photography, racial politics (including colorism and classism within African American communities), feminist/queer theory, art and consumer culture—connecting Vanity Fair to Donna Haraway. Yet Brown never makes this feel overwhelming for the reader; Brown creates a streamlined narrative without sacrificing context.

If there is one significant flaw to this work, it’s that the book could even be more expansive. I could easily perceive this book extending into the era of the supermodel and even further into the early years of the era of the influencer, as the threads of performative femininity and sensibilities of queer creatives are evident in both eras. There is an equally reasonable argument that both eras would require more space to be fully explored. However, the book never gestures towards a definitive ending, trailing off at some point in the 80s with its epilogue bringing the reader back to modern day.

Work! is a deep dive into the history of a profession that is often regarded by many with surface-level thought. Modeling is often tasked to help create an image worth a thousand words, but Brown successfully uses more than that to show how the vocation and its inherent queerness pervades multiple aspects of America’s culture.

'Nightingale' by Andrea Bramhall
'On Being Different: What It Means to Be Homosexual' by Merle Miller
‘The Trees in the Field’ by J.E. Knowles