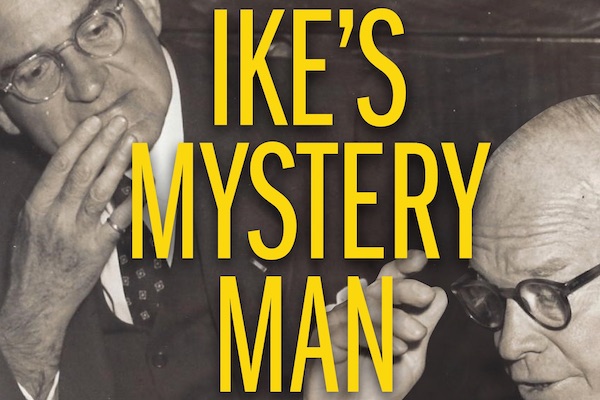 What do you do if you’re gay, closeted, and a vital part of a homophobic president’s inner circle?

Journalist Peter Shinkle seeks to answer this question with his new book Ike’s Mystery Man: The Secret Lives of Robert Cutler. Shinkle spent twelve years pulling together a book on his great-uncle Robert “Bobby” Cutler’s. Using Cutler’s personal diary as a pivotal reference, a dairy which described his obsessive love affair with another man, Ike’s Mystery Man digs deep into US post-World War II history and how our government dealt with the LGBTQ community at that time.

Texas-born Dwight David “Ike” Eisenhower, the 34th US president (1953-61), had Cutler at his side for both of his terms in office. As a closeted gay man, Cutler was our nation’s first national security advisor, establishing the National Security Council (NSC). He was also hopelessly in love with NSC staffer Skip Koons. The story unfolds in Cutler’s 725-page personal diary found by Shinkle.

During World War II, Ike was a five-star general in the US Army and served as Supreme Commander of the Allied Expeditionary Forces in Europe. He supervised the invasion of North Africa and the successful invasion of France and Germany. In other words, he orchestrated US efforts in concert with our then-ally The Union of Soviet Socialist Republics to win the war together.

In 1953, Ike issued Executive Order 10450 which banned gay and lesbian people from working for the federal government. Cutler drafted the eight-page order which demanded that all executive agencies execute background checks on employees. They were to look for evidence of connections to communism, criminal behavior, drug addiction, and “sexual perversion.” Homosexuals were seen as potential security risks since their love life could be used against them. They could be manipulated into spying. The situation then is much like the current turmoil over President Trump’s possible financial and other erstwhile involvements with Russians in ways the public has yet to fully understand or has been revealed.

Against this Cold War backdrop, Cutler served Ike as one of his closest advisers. As Time magazine said of him, “He probably carries more top secrets in his head than any other man in Washington.”

Shinkle suggests that Cutler wrote the gay ban order to protect himself, throwing Senators and bureaucrats off his scent during the Lavender Scare. The closet warps us all. Cutler sidestepped the mid-century witch hunt and after Ike’s 1956 re-election, when the Homo Hunt dissipated, he returned to security issues. But not before FBI director J. Edgar Hoover investigated him, only to back off—an indication of Cutler’s importance to Ike.

In short, Cutler’s story is the same as many white, cisgender, educated, homosexual men of the mid-20th century: all their talents were sucked from their veins while they dutifully internalized the dominant culture’s values. The culture that said, we want all your talents, we just don’t want you. And aren’t you nice to understand that. Consequently, thousands lost jobs, and some committed suicide. Koons was eventually forced from government service. Shinkle writes that “the impact was devastating.”

For history lovers, Shinkle’s play-by-play accounts of Cold War intrigue and internecine turf wars that shaped US policy will take them layers deeper than previous accounts.

The book solidly explores how Cutler’s love affair with Koons was perceived by other members of Ike’s inner circle as having the potential to bring down the presidency. Shinkle also sheds light on Cutler’s support of Ike’s deal with Senator Joseph McCarthy, who was holding House Un-American Activities Committee (HUAC) hearings based on ‘fake news’ he concocted to advance his political agenda. At one point, McCarthy, an alcoholic and thought-to-be closet case, held up a list he claimed detailed more than 200 State Department spies working for Russia.

As an adviser, Cutler played a key role in how much to tell the American public about the nuclear arms race. To his credit, he formed the larval NSA into an “honest broker” when informing the president of world affairs. Unlike today’s toxic political environment, Cutler was able to work both sides of the aisle to achieve consensus. Perhaps his precision juggling of private and public matters gave him an edge when negotiating.

There were, and perhaps remain, many men and women like Cutler whose troubled contributions to government and society are revealed only after it becomes safe.

'History of a Pleasure Seeker' by Richard Mason
'The Heavens Rise' by Christopher Rice
Deafen the Satellites: David Wojnarowicz at the Whitney