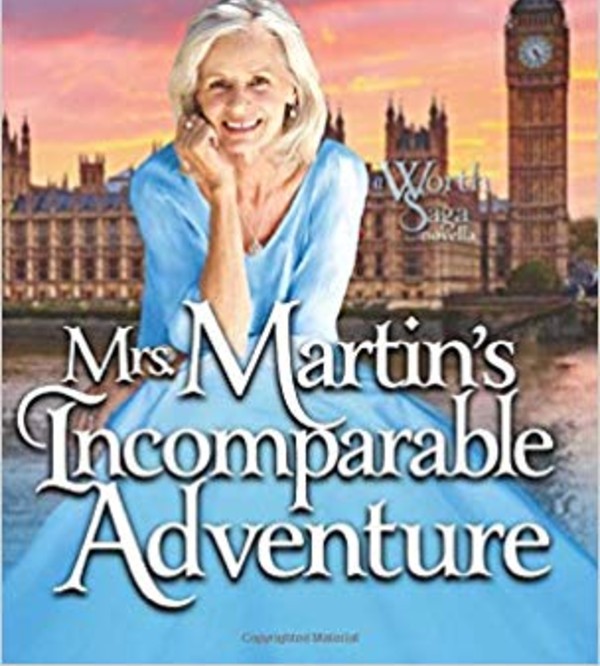 Life is rather dull for Mrs. Bertrice Martin, the protagonist in Courtney Milan’s new novel. A widow at seventy-three with forty thousand pounds to her name, she might want for nothing, but she also can’t seem to find joy in anything either. Bertrice’s physician has recommended she go to Bath for an adventure, but when Miss Violetta Beauchamps turns up on her doorstep with a problem, Bertrice recognizes the opportunity for something even more restorative than Bath’s waters: the chance to take down a terrible man.

After carefully saving money over her forty-seven years running a rooming house for Mr. Toggert, Violetta has enough tucked away to last her for the next five years. But that isn’t enough to guarantee she’ll be taken care of for the rest of her life, since Toggert denied Violetta the pension he’d promised she would receive when she turns seventy by firing her earlier that year.

Desperate to secure her future, Violetta has a plan. She just has to make Mrs. Martin believe that Violetta owns the rooming house, Mrs. Martin’s nephew owes her sixty-eight pounds, and Violetta wants the money and wants the nephew out of the house ASAP. Bertrice knows her nephew’s tricks, however, and is long since used to him forging her signature. So, instead of simply clearing his debt, Bertrice has a proposal of her own. She and Violetta will drive the Terrible Nephew [sic] from the rooming house and, once they’ve succeeded, she’ll give Violetta the money as payment for helping her torment a dreadful man and not to cover what he owes.

Bertrice and Violetta travel to London the next day from Bertrice’s home in Surrey County so they can start the necessary work to evict the Terrible Nephew. But the awful man won’t leave just because they tell him to, so they have their work cut out for them. If they happen to form a friendship and even fall in love along the way? This could be the greatest adventure either of them has ever known.

If only one word could be used to sum up Mrs. Martin’s Incomparable Adventure, it would have to be FUN. And that’s right from the get-go in this historical romance, because Bertrice’s field of damns is barren. She doesn’t care about social graces, nor does she need to because she has wealth to back her up. Her first words to Violetta are “Well? What do you want?”, followed by “Blah blah blah […] Imagine I just uttered all the greetings that politeness requires. What do you want? Answer now, truthfully, or get out.”

Bertrice’s ingenious, creative mind is also on full display when they’re in London, as she comes up with increasingly outlandish, hilarious tactics for torturing the Terrible Nephew that can’t be described here because they must be experienced without spoilers. Bertrice might be a difficult woman to keep up with, but Violetta more than proves herself to be up to the task as she stays in lockstep with her from one antic to the next, and even grows to be more assertive thanks to Bertrice’s influence.

While this might be one of the funniest romances released recently, it’s also balanced by grounded, gentle moments like when Bertrice, who is used to having the finest meals made by a number of staff, delights in Violetta’s usual meal of toasted cheese on bread. It also doesn’t shy away from difficulties that would have been experienced by “surplus women” like Violetta, who never married. For example, she knows that as a woman who isn’t beautiful and has little money, she’s invisible and her anger about that explodes when Bertrice praises the beauty of an old tree.

“Trees and streams and valleys and beaches alike. All of them grow more beautiful with age. Even men in their own way receive more respect. But it’s not all of nature. It’s all of nature except human women.”

Bertrice turned to her, eyes wide.

“It’s not me,” Violetta snapped. “Nobody praises the texture of my skin, now that I’m no longer smooth as a sapling. Over the years, I’ve grown rounder and more lumpy, but when it’s a human being with cares and feelings instead of a tree, I’m considered disgusting.”

At only 154 pages, Mrs. Martin’s Incomparable Adventure is a short, but satisfying, read, especially in this day and age when terrible men prosper in every industry. There is no nuance to the Terrible Nephew, who truly is too awful to be named, and that’s okay because it’s not about him. It’s about two elderly women finding joy, love, and a little revenge in a world that doesn’t think much about them anymore.

If you want a story to take you away from it all, look no further. Maybe keep some tissues handy, though, because you might just end up laughing so hard that you can’t help but cry a little.