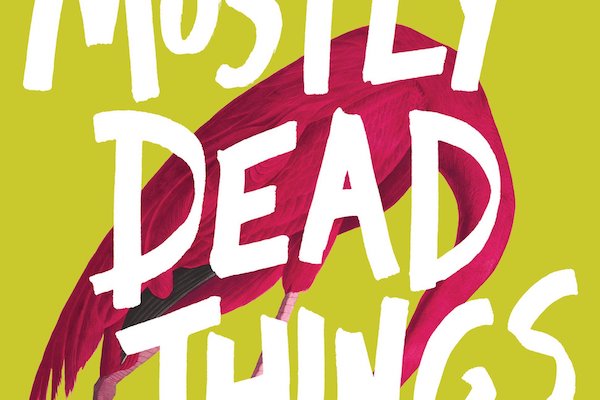 It’s another morning in small-town Central Florida, and outside the local taxidermy shop stands a middle-aged woman in a nightgown and fuzzy slippers, tapping a cigarette into a coffee mug and admiring the pornographic window display she’s created with the shop’s wares. For her daughter, Jessa Morton, it’s one more thing to deal with on top of her father’s recent suicide and her less-recent abandonment by her lover, who was also her brother’s wife.

So begins Mostly Dead Things, the first novel by the writer and Twitter virtuoso Kristen Arnett. Despite its raw materials, it is neither a slab of Southern Gothic nor a zany romp through the land of Florida Man. To its protagonist and her author, taxidermy is no joke. It’s an art, and even a kind of nurture: “Animals that might have weathered into nothing got to live on indefinitely through our care,” Jessa says. It’s also a bottomless source of metaphor for Arnett—sometimes forced, but just as often fertile

Like mediums and morticians, taxidermists hold a uniquely proprietary relation to the dead. By carrying on her father’s business, Jessa intends to preserve in formaldehyde the memory of a loving but inflexible patriarch, who would have preferred that his shiftless son Milo follow in the family trade but ultimately settled for turning his daughter into his “little miniature.” Arnett adeptly captures the comfort an odd, unfeminine girl might find in this model of close-mouthed masculinity. Jessa recalls roadkill-harvesting missions on which father and daughter rode in happy silence in a truck that “smelled like gasoline and heated vinyl. Receipts slid along the dashboard with a satisfying hiss every time he’d turn a corner or switch lanes.”

The other great lost love of Jessa’s life is Brynn, hopelessly entangled with both Morton siblings since childhood. Into a family that doesn’t “discuss each other’s business,” she brings a vitality that overflows into chaos, “shouting her feelings at the top of her lungs so everyone could experience them with her.” She’s “curvier and funnier and meaner than anyone,” both a type familiar to many a queer woman who’s had a teenage crush encouraged by a putatively straight girl and one of Arnett’s most original creations. Their relationship plays out in moments stolen at sleepovers, amid preparations for Brynn’s wedding, and, later, as Milo’s away struggling to fulfill his role as breadwinner, all masterfully rendered by Arnett. It’s no surprise that Brynn leaves, or that Jessa feels permanently undone when she does.

Compromised as her attachments to the departed may be, Jessa is most at home in the past. Curiously, so is the novel itself. Compared with the visceral longings and disturbances of Jessa’s adolescence, present-day plotlines like the one involving the widowed Mrs. Morton’s nascent art career feel less charged with lived experience. In the present, characters wrangle exposition into dialogue (“The economy’s not great, and there’s no money from life insurance, since … you know”) and have their motivations laid out plainly: Mrs. Morton, we are informed, enjoyed making her R-rated art “because she felt a wild kind of freedom that she’d never had access to before.”

Throughout, many, many animal corpses are dissected and desecrated in many creative ways. (I grew up among hunters and their trophies—no stranger to the sight of, say, a gun rack formed from deer hooves upturned in surrender—and still found some passages difficult to stomach. If you read at the table, be warned.) Not that Arnett is necessarily aiming to shock. Her eye seems naturally and continually drawn to dust, grime, guts; even beyond the taxidermy table, there’s hardly a clean surface in the book. She’s at her best elbow-deep in the details, sorting through the mess of family history to determine what can be salvaged and what should be laid to rest.