On Being Born, Dying, and Getting an Acting Gig: Delving into the Life of Becca Blackwell

On Being Born, Dying, and Getting an Acting Gig: Delving into the Life of Becca Blackwell 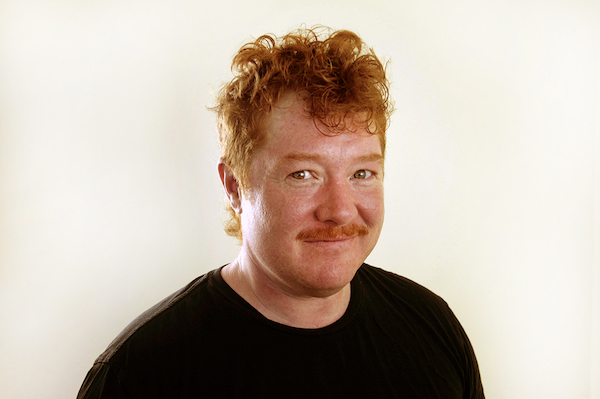 “The only thing I can garner from this business of making art is to prepare yourself for the longest long game you have ever played.”

“The Banal and the Profane” is a monthly Lambda Literary column in which we lift the veil on both the writerly life and the publishing industry. In each installment, we ask a different LGBTQ writer, or LGBTQ person of interest in the book industry, to guide us through a week in their lives.

This month’s diary comes to us from Becca Blackwell, who uses the column to traverse the space time continuum.

Becca Blackwell is a NYC-based trans actor, performer, and writer. Existing between genders, and preferring the pronoun “they,” Blackwell works collaboratively with playwrights and directors to expand our sense of personhood and the body through performance. Some of their collaborations have been with Young Jean Lee, Half Straddle, Jennifer Miller’s Circus Amok, Richard Maxwell, Erin Markey, Sharon Hayes, Theater of the Two Headed Calf and Lisa D’Amour. Film/TV includes: High Maintenance, Marriage Story, Shameless, Deadman’s Barstool, and Jack in the Box. Becca is a recipient of the Doris Duke Impact Artist Award. Their solo show They, Themself and Schmerm tours in towns like yours.

Still can’t get an acting gig.

I am working on a series of readings. The directors are from out of town. NYC is just never a chill city to make art in. I am constantly annoyed at them wanting me in the room if I am not in the pages they are working on. I have felt myself lose all joy in acting. I have become that person who cannot convince themselves that roughly $500 a week for performing and creating is enough. My drug dealing and sex work days are over. I miss the cash flow.

I suffer from debilitating panic attacks on stage. They started 10 years ago when I was doing Trifles at the Ontological. I get what seems like vertigo. My concept of space and where I am on the edge of the stage becomes almost as though I am tripping. It is most profound when I have to freeze on stage or have to be very quiet. I can’t stand still. I have an illogical need to ground myself and staying still seems impossible. I have only told a handful of people. I have only recently told people how stressful it is. I have powered through for so long and now I don’t think I can. I wonder if I can never do runs of shows again. If I can only ever do my own work. The amount of money I make to do the work I do with that added experience is too much for me. I wonder on a deep level why my body hates acting so much and I think because it is so undervalued by producers and those who have never done this to their bodies; and because there are a million people chomping at the bit to get in there. It’s a young person’s game. They can have it. To those who do 8 shows a week and find great joy in it, I applaud you. I wish I could. But taking home about $500 a week for 8 shows a week is horrific. I never want the lead again. Give me the guy who gets killed in the 1st 20 minutes. Actors in their 30s think I am being dramatic. I don’t know many actors in their 40s and 50s. Now I know why.

No one takes advice and why would they.

I finished writing grants with the help of my friend. She helped me for free because we were to meet at an Au Bon Pain, and she never showed up. So for approximately 2 hours I sat in my own mind-stew of rejection. She had sold a TV series and was in the middle of that when she was to meet me and didn’t know what to do and just thought, “Becca will understand when I finally tell them.” And I did. Completely. But there were 2 hours when I allowed my mind to go to the depths of the recesses of hell. This business is bananas no matter what rug you look under. If I get these grants I can pay people to work with me. If I don’t I will put those projects on the back burner again. The only thing I can garner from this business of making art is to prepare yourself for the longest long game you have ever played. I go back and forth with being chill with it. I am very glad I have some sort of meditation practice which enables me to stop punching myself in the neck repeatedly.

Sometimes I have to remember younger people have to act like they know better because they are still cutting the apron strings of their programming and it’s best to let them wax on about their new findings of old stats. I have become the old dyke that walks uphill even on their way back. Or as María Irene Fornés says in Promenade, “Learning things everyone already knows isn’t that exciting” (I am paraphrasing).

I hate school. But I hate home too. I don’t really know the word authority, but the concept of it intuitively makes me want to shit my pants and play Pooptown, USA.

I truly have deep love for people. Humanity. Whatever the fuck you want to call them. I am also incredibly critical. Mostly of myself. I also am able to have great compassion. I haven’t figured out how to be moderate in these modes of being though. To let thoughts, like clouds, pass along.

Do you think men would rally invisibly for women if there was some disease making them sick? Like just get in there and be caretakers for them? Asking for my genitals.

It is wild getting older. I have never really thought much about my age. It wasn’t something I felt much about. Rather neutral. I think to be 46 and still working on working to work makes some people like “this is where the eyes emoji goes.” We think we will just get there. But if I really use the belief system I adhere to, Taoism, then I must believe the main tenet…there are no accidents. And so then one could conclude that I don’t want to be successful with what I have been taught is success. Unrestricted money is super cool from an institution. But also, getting closer to the sun you realize why that Icarus story exists. It’s fucking hot. But as one of the students, Pamela, said this summer when asked to express their WTF thoughts…”If the sun is hot why is space cold.” God bless the 16-year-olds, the kids are all right. Or at least the 12 I met this year from all over NYC.

I am 50. I made the 3 pieces I wanted to in the last 3 years. I am a regular on a freaky ass good television show and I got a ton of money in my bank account. I send checks to artists, young and old. I take the 2 ultimate vacations I had always dreamed about. I take up tango again. I dance every day. I practice my qigong every day. I don’t own property. I don’t care what others think but I love them.

I die. Again. I contemplate what form to take next. The adventure continues.

Reader Meet Author: Personal Advice from Poet Adam Fitzgerald
Susan Sontag and the Hetero Presumption
We Will Not Be Erased! Support Trans Storytellers!