Love at First Sight: The Brilliant Generosity of Kevin Killian

Love at First Sight: The Brilliant Generosity of Kevin Killian 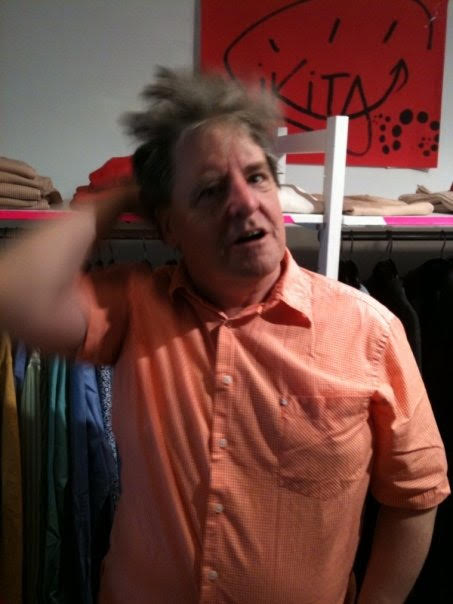 “The music you were playing really blew my mind.”
–“Love at First Sight,” Kylie Minogue, 2002

I first met Kevin Killian in March of 2007. He had no reason to give me the time of day, really. I was a blogger, which, in that year was actually (briefly) a thing. But I reached out and he responded to my email with an enthusiasm that I would come to understand as characteristic and unique to him: a kind of intrigue in the boundless potential of things. He carries that with him like Warhol did his cassette recorder. Thanks to Facebook I can see just how many young writers Killian does this for, both one-on-one and within the writing workshop that he runs with his partner, Dodie Bellamy. That March, I met him at his office for lunch, and over his signature hamburger he asked questions and listened as if I was the most important writer in the world, as if lurking behind my eyes was the next great American novel. He still talks about things in that way. Kevin sees potential in everything.

(I’m using the present tense and writing this quickly on the morning of June 15th, after learning he was unwell, while he’s still with us, hopeful that these words make their way across some kind of literary astral plane.)

We were there to discuss our great mutual love: Kylie Minogue. I had long since fallen down the rabbit hole for the Australian singer, who seemed to me the perfect vessel for pop, since her limited vocal range provided a kind of giddy, every-woman hoodwink ebbing out from those sparkly Euro-pop records. If she could do it, anyone can! For Kevin, Kylie is a kind of impossible optimism caught in a rather modernist focal lens. After dedicating decades to the study of Jack Spicer and penning poetry about Dario Argento, Killian moved on to Minogue as his next auteur, first as a somewhat sardonic device. “Does it really make any difference how good they are? That’s all in the eye of the beholder. Maybe if someone wrote for ten years about someone who had no talent at all, that person would still advance a little into the canon of respectability.” But his generosity got the better of him and soon he was singing the virtues of “the greatest entertainer of all time.” When the singer went country last year, I lamented, but not Killian–for him Kylie can do no wrong, “Music’s too sad for you, Bradford? I love it.”

To call Killian encyclopedic would be putting it mildly. Actually, Wikipedic would be more accurate. On the June 14th, over margaritas, Kevin’s publisher and I faced the news of his failing health, and he sighed, “It’s like losing a library in a fire. He has so many poems committed to memory.” And poetry is just the start. Killian is an old-school film gay of the highest caliber. Just as his infatuation with Minogue gives off, his cultural interests lie everywhere. He can pen a love letter to Margot Kidder without batting a lash then twirl and dispense with a reading on the latest piece by Kota Ezawa. And though (or because) he emerged from the esteemed New Narrative movement in San Francisco and has authored numerous plays for the Poets Theater, it is my staunch belief that his greatest contribution to literature is his Amazon reviews. Bouncing back from a heart attack that left him unable to write, he used the consumer review format to spark the creative bug and ease him back into his literary prowess. But again that Killian veracity took hold and three volumes of the collected Amazon reviews have since been published. What format could be more literary in 2019? Leave it to Killian to elevate the mode to a platform for poetic wonder. (My favorite describes a Lycra thong).

Visits with Kevin are paid each time I visit San Francisco. In 2012, I interviewed him for Lambda Literary and posed for the photographic, Tagged series that he was making at the time. I placed the recorder on the tabletop and we chewed the fat for a while then paused to take a break. Our cell phones each roared to life with the news that Whitney Houston had passed away in her bathtub just before the Grammy’s and we looked at one another in numbness and awe. Three years prior we had collaborated on an essay together, “The Cinema of Whitney Houston,” considering her in a light different from her Manichean arrangements of aural emotionality. Killian was astute to add her acting in music videos, performances I had overlooked in my initial pass at The Bodyguard, Waiting to Exhale and Brandi’s Cinderella. For him, those dance floor movements before the camera were just as crucial to understanding what composed her cinema, as anything else. Which, of course they were. That we found one another together at the moment of her death spooked us in a way that felt like a pact.

Soon, Kevin, I know that you will no longer be here, that we will lose you, too. And my brain, I guess naturally, races to that time you made me see Final Destination 5 in 3D at the Metreon, the ritzy mall that was erected to the dismay of San Francisco locals and the joy of tourists. Like many pop cultural offerings, Metreon felt dated as soon as it opened, but you loved it. Its heyday was long behind us when we bought our Premium priced tickets to the movie, in which teens cheat death only to be followed by death him or herself and get killed off in harrowing and creative ways. And in 3D! “You better watch out, young man,” you yelped, removing my hat from my head and shielding my eyes from the screen in jest. “It may prove too much for you!” It never was too much for you. And you never closed your eyes.

[Editors note: This essay was written on June 15th, a day before Killian’s death]