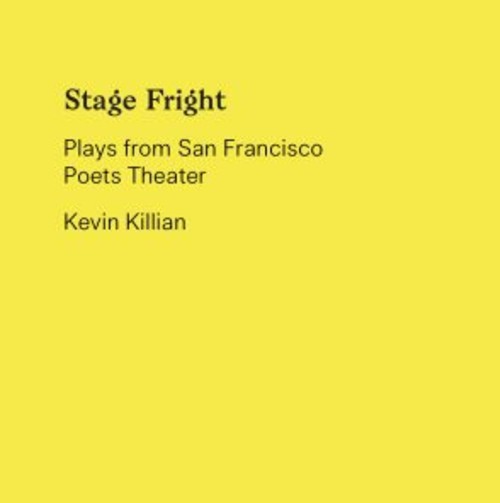 Kevin Killian, the esteemed West Coast-based writer who died this month, said the plays he wrote for the San Francisco Poet’s Theater are “haunted by the specter of lost authenticity.” These plays, many of which are now published in his new anthology, Stage Fright (from Kenning Editions), do not necessitate live performance, or even audience at all. This is not to say that they elicit no response—emotional, comical, dramatic, political—from their readers, but rather that they aren’t necessarily written to be heard. And it is this contradiction that lives at the center of a poet’s theater: These works exist as well as closet drama as they do live performance; they are the work of the poet, not the performer. Does this mean that they’ve lost “authenticity”? I’m not so sure.Killian wrote the plays in Stage Fright from the 1980s to the 2000s. Most were performed, either as a part of the San Francisco Poet’s Theater or in later festivals. Yet, as these works were written for reading or for readings (that is, in the mind’s eye or aloud in salons), reading them in this volume gives the plays the same attention. These plays, and the poet’s theater tradition, embrace the quotidian, they celebrate that which is amateur. Killian writes that he hoped audiences would come away from his plays thinking: I could do that! And as he asks: “Isn’t that the best kind of work, something generative?”

The plays in Stage Fright argue for a theater that can respond to the moment as quickly and efficiently as a poem, a sketch, a song, or a slap-dash piece of cultural criticism. In elapsing the time needed for writing, revision, and production, these plays speak vibrantly of their moment of creation.

Killian’s style is caustic and wonderfully bizarre. His writing flings about a queerness that lands somewhere between Charles Ludlam and Robert Chesley, with a dash of Nora Ephron along the structuring styles of Thornton Wilder. These plays are achingly specific. Loving references to San Francisco and disparaging comments about Marin abound (they will perhaps will not compute to readers outside the Bay Area). Figures like Liza Minelli and Lauren Bacall show up, and you better know their most famous films if you want to get the jokes. In the play Island of Lost Souls, stage directions describe William S. Burroughs as “sinister novelist, wife murderer,” Sunny von Bülow as “heiress, diabetic,” and Julie Andrews as “restless British superstar.” She’s restless, you’ll come to learn, in her pursuit to create a musical version of On the Road. Sounding like Ludlam yet?

As with any works written to speak to their immediate circumstances, many of the references in these plays may not resonate with current culture mavens. Sequences with Joey Buttafuoco, Tuesday Weld, River Phoenix, and Tonya Harding may require a bit of Googling for younger readers. A conversation with Gus van Sant in the play Three on a Match discusses his long-delayed biopic of Harvey Milk, with Robin Williams as Milk and Daniel Day-Lewis (“who is such a bullshit actor, man”) as Dan White. That van Sant’s film was finally made, with Sean Penn no less, positively sparkles with irony. (If only the fictional van Sant’s next project, a remake of Sunset Boulevard with Angie Dickinson and “ten pounds of psychedelics,” would get the green light.)

Though occasionally hard to follow, the elated queerness and unabashed strangeness of these plays prove a delight to the twenty-first century reader. Who wouldn’t want to read about a world like that represented in the play The Big Keep, in which Walter Benjamin replaces Benjamin Franklin on the hundred-dollar bill, Joyce’s Ulysses replaces S. Grant on the fifty, and Janet Jackson replaces Andrew on the twenty? Not I! The plays read quickly and speak fondly of a San Francisco before the invasion of the tech giants. They present an artistic situation in which dramatic expression is as easy as a reflection on the day, and Killian’s texts, presented now for the first time as a collection (which is, perhaps, anathema to the whole project) give their reader the opportunity to both engage with an old manner of storytelling and also to see the potential for themselves to become dramatist in a matter of moments. Killian stated:

In our case it seems as though audiences feel they can not only write as I do, they can act too, inhabit other realities than their own, or participate in direct political action. It’s a blanket permission, as if the magical hills of San Francisco didn’t already give us all the permission we needed, to be someone else, even just for one night.

And how lovely it is to escape to Killian’s San Francisco, and to imagine ourselves his audience, his collaborator, his friend.