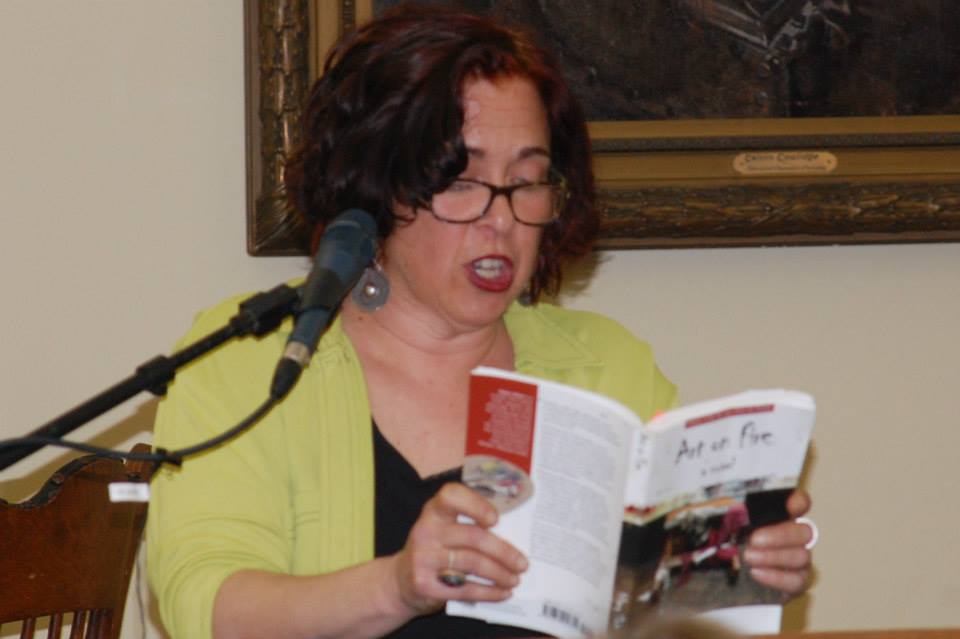 It has only been a few days since I heard the sad news that Hilary Sloin has died. The first time I met Hilary was at the OutWrite Conference at the Park Plaza Hotel in Boston. It was the mid-nineties. I can’t remember if it was the year the conference suddenly became bigger, with lots of agents, publishers, and a more exquisitely dressed crowd; or if it was the year after that, when a brief boom in queer literary fortunes was over, and the turn-out was sparser and shabbier. Either way, I was moving through a hallway on a current of jittery writers rushing to panels when I ran into a group of lesbians from back home. Hilary was there with the Valley Lesbian Writers Group, which I had recently left.

My world had been buzzing with word of this hip, smart novelist and playwright who had recently moved to town. Sally Bellerose introduced us. Crackling with energy and confidence, Hilary looked at home in the big city. I told her about the buzz. She said she had heard of me, too.

Before long, Sally, Hilary and I were exchanging manuscripts. Hilary’s novel-in-progress had the working title of The Unfinished Life of Francesca deSilva. It was a wild adventure of a book. Once, after Hilary and I gave a reading together, I overhead a queer studies professor tell someone that she felt as if she had heard the other work before–ouch!–but that Hilary’s writing was something new. Later, Hilary’s manuscript won the non-fiction prize in the Amherst Book and Plow Competition, even though it had been entered in the fiction category. People didn’t know what to make of it.

That novel became Art on Fire. It is full of girl geniuses who win chess championships, read the encyclopedia, kiss each other, and publish agented (!) books of poetry at fourteen. One of them grows up to be the acclaimed artist, Francesca deSilva. One of my favorite parts of the novel are the descriptions of Francesca’s paintings that appear throughout. Rake. Woman Reclining on a Blue Couch. The Lisa Trilogy. What She Found. The images are mysterious, emotional, haunting. Reality Has Intruded Here is a painted door with a hole from what might be a BB gun, which if peered into reveals a shoebox diorama of a pipe cleaner version of Francesca’s grandmother in her kitchen. The descriptions of Francesca’s art are footnoted with commentary by a variety of critics, including a voice that seems to channel the author of the textbook for my “Women in Art” class from college in the 1980s; journalists writing articles such as “Who’s Hot (and Who’s Not) on the Soho Scene;” and the author of an essay in the catalog for Francesca’s Whitney Retrospective. The dead-on evocations of such a variety of authoritative critical chatter is a big part of the reason some readers forget that this is a novel.

Me, I never forget that. Working with Hilary and Sally on each other’s novels was full of what I recently heard novelist and teacher Judith Frank call, in another context, “mediated love.” Love as a practice of trying to read a manuscript with enormous patience and attention, of pushing to be as honest as possible, as a commitment to help the other writer make the book most fully what she wants it to be. I am not pretending to be objective about Hilary’s book or even trying to accurately sum up the plot. (Although, in that old spirit of finding my courage, I will tell you that the themes of the book include suicide.) What I am doing here is mourning my old friend Hilary–she called me her “compatriot” in her inscription in my copy of Art on Fire, and that’s probably a better word–by inviting your attention to her intensely felt, funny, queer work.

The last time I saw Hilary might have been at a reading I had organized as a celebration of local novelists at the public library in Northampton when I was writer in residence there. We would not have been welcome to read our work at the library when we were working closely together, but some things had changed. Hilary, radiant and impassioned, gave an inspired, risk-taking reading that had the packed room laughing and gasping. Her novel ends with a dance between the words “happy” and “sad.” That’s how I feel, remembering her there.

Kim Chernin and Renate Stendhal: On Writing Together as a Couple
'The Women of San Quentin: Soul Murder of Transgender Women in Male Prisons' by Kristin Lyseggen
Gerrick D. Kennedy on His Career as a Music Journalist