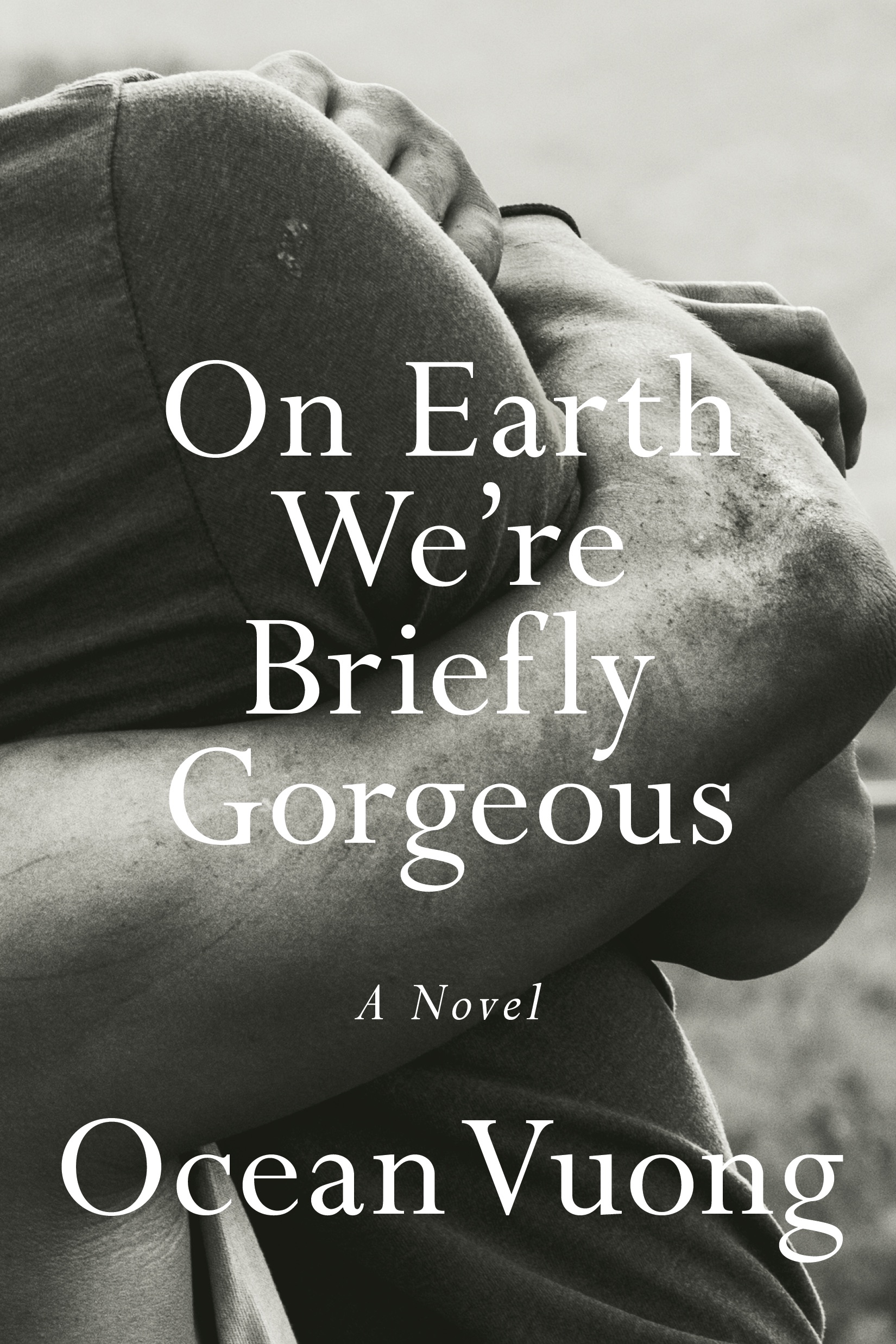 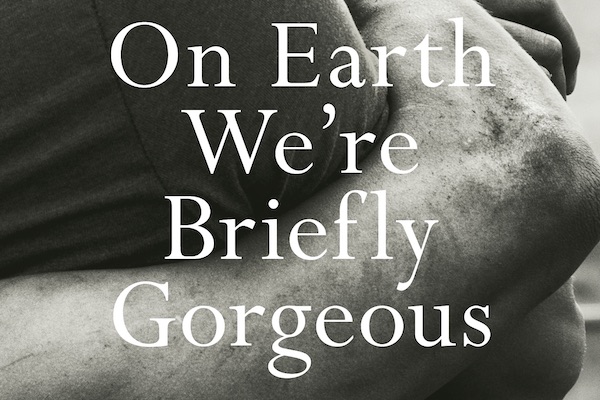 On Earth We’re Briefly Gorgeous is a letter to a mother from her son, beginning from the riddles of distance: “Dear Ma, I am writing to reach you—even if each word I put down is one word further from where you are.” The son goes by Little Dog, a moniker his grandmother gave him as an act of protection. Evil spirits—the thinking went in her Vietnamese village—would skip over the weakest, easiest prey if they were named something hideous. “To love something,” Little Dog ruminates in his letter, “is to name it something so worthless it might be left untouched—and alive.”

Such is the devastating terrain of Ocean Vuong’s debut novel, which charts the violence and beauty that follows from human connection with startling empathy—startling, in part, for Vuong’s proximity to Little Dog. On Earth is not a memoir, yet it certainly does not shy away from the biographical. The first chapter of the novel received publication two years ago in The New Yorker, categorized then as “personal history.” Little Dog also shares obvious similarities with his author—Vietnamese American, late twenties, a writer who reached New York City by way of Saigon, Vietnam and Hartford, Connecticut—and these parallels make On Earth all the more affecting. In its finest moments, Vuong’s prose features the sort of tender, aphoristic flourishes and sense of lived experience contained in the work of James Baldwin, who Vuong gives a “deep bow” to in the novel’s acknowledgments.

Little Dog writes to his mother about their family, the war they emerged from, and the generational trauma they share. He bares so much of himself, he acknowledges, because his mother, who is illiterate, will never be able to read his letter: “[T]he very impossibility of your reading this is all that makes my telling it possible.” Thematically, On Earth We’re Briefly Gorgeous covers ground Vuong first approached in his outstanding 2016 poetry collection Night Sky With Exit Wounds. (The novel even shares its title with a poem from that collection.) In a piece from Night Sky, Vuong lays bare the harrowing equation of his existence: “An American soldier fucked a Vietnamese farmgirl. Thus my mother exists. Thus I exist. Thus no bombs = no family = no me. / Yikes.” Vuong’s debut novel offers an extended exploration of that “yikes,” which, while painfully specific to Vuong and many other Vietnamese Americans, also embodies the ubiquitous violence enshrined in American life more generally. Scenes from the US occupation of Vietnam stand alongside thoughts on Tiger Woods, lyrics from 50 Cent, and descriptions of urban nail salons—the composite, enthralling in its congruence.

Historical atrocities are never purely past-tense events, Vuong’s protagonist comes to realize. He imagines history not as a line but a spiral that boomerangs back upon itself: “As time carries us, we come face-to-face with the tragedies we created.”  The mother-son relationship in On Earth provides a complex portrait of this historical reckoning. The novel opens with Little Dog reflecting on his mother’s violent outbursts: “The first time you hit me, I must have been four. A hand, a flash, a reckoning. My mouth a blaze of touch.” The narrator proceeds to chronicle his violent upbringing (“I fell playing tag,” Little Dog offers as an early lie to teachers) alongside moments of remarkable tenderness. Blows to his head are juxtaposed, for example, with maternal consolation during a turbulent plane ride: “You wrapped one arm around my shoulder, leaned in, your weight absorbing the plane’s throttle… With the universe back in order, I sat back and watched as we broke through one mountain after another.” A survivor both of war and domestic abuse, Little Dog’s mother lives in the clutches of PTSD, and Little Dog’s reflections on this trauma are trenchant: “I read that parents suffering from PTSD are more likely to hit their children… Perhaps to lay hands on your child is to prepare him for war.”

As Vuong draws on the personal, so too does he pull from his poetic prowess, animating On Earth We’re Briefly Gorgeous with his gift for vivid precision. Raindrops slide down a soldier’s “dirt-baked cheeks… collecting like ellipses along his jaw.” After being bullied on a school bus, a young Little Dog repeatedly kicks his light-up shoes, which “erupt with silent flares: the world’s smallest ambulance, going nowhere.” Of the bully, Little Dog reflects, “He was only nine but had already mastered the dialect of damaged American fathers.” Such sensitivity to environmental forces colors Little Dog’s descriptions of Trevor, the wild and rough farm boy Little Dog falls for when working on a tobacco farm one drug-fueled, teenage summer. Trevor struggles to reconcile his rugged masculinity with his sexuality and tender instincts. Vuong captures Little Dog’s passion and anguish for Trevor with exquisite care, allowing the prose in these sections to eventually break into stirring verse where Trevor’s discordances rapidly layer atop one another. He moves quickly from all hard edges (“Trevor the carnivore, the redneck, not a pansy, shotgunner, sharpshooter, not fruit or fairy… [T]he pine-stick thumb on the Big Lighter…”) to soft day-dreamer (on why he likes sunflowers: “Imagine going so high and still opening that big”), the accumulation feeling, ultimately, doomed for collapse.

Taken in isolation, some of Vuong’s sentences could feel affected or ornamental; one remarkable achievement of On Earth We’re Briefly Gorgeous, however, is how hard-earned these flourishes feel. This is a novel filled with myriad heartaches and Vuong, in not shying away from such depths, gives voice to the beauty that remains nonetheless. As Little Dog recognizes, “All this time I told myself we were born from war—but I was wrong, Ma. We were born from beauty. Let no one mistake us for the fruit of violence—but rather, that violence, having passed through fruit, failed to spoil it.” In a recent profile by Kevin Nguyen for The New York Times, Vuong revealed that his own mother was just diagnosed with stage-four breast cancer; her prognosis is grim. Vuong has had to translate for her during doctor visits, much like how Little Dog translates doctors’ words for his mother in the novel. If this news highlights how ceaseless cruelty can be, perhaps it may also underscore the immense vulnerability Vuong pours into his art—and what a gift that is. In On Earth We’re Briefly Gorgeous, Ocean Vuong offers so much of himself and, in doing so, makes suffering feel, if not less senseless, then at least less lonesome. There’s nothing little about that.

Horatio is a queer poet, writer, and massage therapist. They are currently completing a doctoral degree in English literature at Princeton University. Their research explores queer heterotopic spaces and the phenomenology of gender fluidity in contemporary poetry, fiction, and performance art.