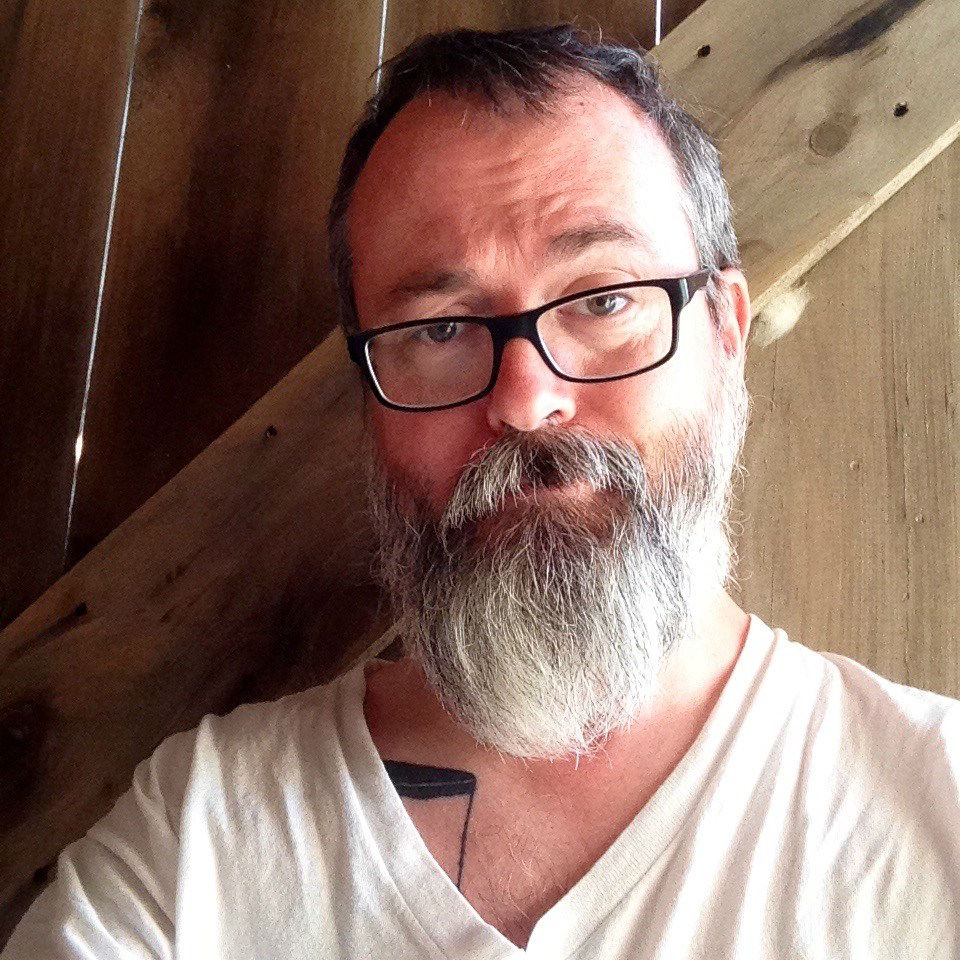 “Adults are often largely absent from YA novels, or when they do appear are problems that need to be solved. Right from the beginning I wanted this to be about generations, about both the good and bad things that are passed between them.”

I met Michael Thomas Ford for the first time in 2014, in New Orleans at the Saints & Sinners queer literary festival. Immediately we bonded over our love of good queer stories and dogs, especially ancient Chihuahuas.  Over the years he has become someone whose opinion I value greatly, and who I’m so grateful to consider a good friend. Though we don’t get to see each other frequently, usually our paths cross at the Lammys, most recently in 2017 when we were both finalists in the same category and had a great time losing together!

I’m always excited to see Michael’s new work but was completely blown away by his new young adult novel, Love & Other Curses. I read the book in less than a day and from the moment I picked it up, I was enthralled by the characters and the story. What I kept returning to when I was reading was how I’ve never read a book–and especially not a YA book–that conveyed so much about the challenges, power, and joy of intergenerational queer family building. Building family and community with queer folks was such a central part of my own coming of age as queer/trans and it was really exciting to see this experience portrayed on the page. Love & Other Curses is a story of queer and trans teenagers finding themselves and each other; it’s a story of the failures and joys of created family, the cruelty and limitations of (some) families of origin. This book tackles queerness, gender, attraction, family, and identity in really powerful ways, and I was thrilled to have the opportunity to sit down and talk to Michael Thomas Ford about the book and his writing process. 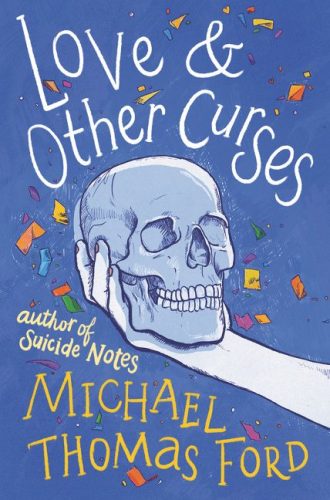 What was the inspiration behind Love & Other Curses?

This book happened because, 27 years and more than 70 books into my career, I finally followed the old advice to write the book you’ve always wanted to read. I was in a strange place with my writing. I hadn’t published a YA novel in a decade, or much of anything at all in about five years. Also, I was caring full-time for my mother, who had Alzheimer’s, and that was both physically and mentally exhausting. I was living in a very rural area, had largely disappeared from the writing world, and was feeling like maybe there wasn’t a place for me there any longer. I got really depressed. Then I decided that I had nothing to lose and should just write a story I wanted to write without any thought to selling it or publishing it. One night I imagined a teenage boy helping an older drag queen get ready for a show and I wrote the opening line: “When Lola asks me to help him with his tits, I know it’s going to be one of those nights.” Then I followed it, writing just 500 words a day at first as a break from caring for my mother, figuring out who the characters were and what they were doing. I let the story get as peculiar as it could be, creating characters and a world that I wanted to read about. I didn’t even think about what the book was about, really. I just wanted to write something magical and strange and that I hadn’t seen before in YA lit.

I really appreciated the intergenerational queer community aspect of the story. That felt so accurate to my experience growing up in the queer community and something I have seldom seen in print–probably never in YA. Can you talk a little bit about that part of the story and why it felt important to you to have?

Adults are often largely absent from YA novels, or when they do appear are problems that need to be solved. Right from the beginning I wanted this to be about generations, about both the good and bad things that are passed between them. I came out in New York in the 80s, at the height of the AIDS crisis, and the older men I met in the bars, through social networks, and at places like the queer community center helped me figure out how to navigate what was a very scary world. I wanted to write about that in my own way and show the importance of the relationships between generations of queer people, because it’s that support that has kept us alive. Most of us don’t come from queer biological families, so we learn our history and our culture from the people who came before us. And in the drag world in particular there’s a long tradition of houses, where older queens take in younger ones and help them survive. I took that concept and worked it into the book as well. By the way, I hope someone writes a YA about that world, because it’s one that needs to be chronicled more thoroughly.

Family in its many forms becomes a key theme in Love & Other Curses. What about family were you hoping to convey to readers?

I am very much a proponent of the chosen family. There are so many of us, even ones who have relatively good relationships with our biological families, who have even stronger ties to the families we make from friends, lovers, and other people who come into our lives. And yet young people are often told the lie about blood being thicker than water, and family being more important than anything. We’re told we should forgive and forget, and that “home” is where your biological family is. Well, that’s simply not true for a lot of people, and I think it’s important for young people to hear that it’s okay to let go of people who don’t bring anything positive to your life, even if those people are, say, your parents. Sam in the book has an excellent relationship with his family, but he also has this other chosen family that is just as important to him. I wanted to show how you can have different families in your life.

Small-town queer life is a central, if not theme, then backdrop to the book. We so seldom see queer stories outside of urban centers–can you talk a little bit about how you thought about setting in this novel?

I set almost every book I write in some variation of the town I grew up in, which was a very small, rural town in central New York state. I do this both because it’s familiar and therefore easier to describe and because I think towns like that are incredibly rich with stories. Small, rural towns are pulsing with violence, longing, love, fear, hope – all of those intense emotions that drive the most beautiful and heartbreaking stories – and those stories are magnified because all the players are intimately familiar with one another. And, as you pointed out, almost no one sets queer stories in small towns. So, I wanted to write something for the queer kids like me who are still in those places dreaming about getting out or figuring out ways to stay in the places they love.

Sam and Tom are really complex characters–they behave badly and have deep desires. I really appreciated the complexity in their lives, identities, etc., but I know this has been controversial in some of the preliminary reviews. Were you surprised that not everyone has been a fan of these characters?

I suspected there was going to be some negative reaction. Tom, the trans character, does not get a particularly happy story line. And because he’s a supporting character to the cis, gay main character, I knew there was going to be some criticism of using a trans character to propel the cis character’s story. But that’s the role of supporting characters, and I felt it was important to include a realistic portrayal of what trans teenagers living in rural areas go through. Everything that happens to Tom has happened to one or more of the trans friends I’ve known and loved over the past thirty years. And yes, he and Sam do some things to each other that are unkind. But that’s what teenagers do, particularly teenagers struggling with intense feelings of wanting to be loved and accepted. Sam wishes desperately that he could be what Tom wants, and when he isn’t, he responds in a hurtful way. But it’s a realistic way. I’m not surprised by the criticism, particularly at a time when own voices concerns are front and center in YA literature, but I also think people need to let teenage characters behave like teenagers do in real life, and not insist that they be as enlightened and evolved as we wish all people were.

Who is your favorite character in the book? Why?

I hadn’t thought about this until you asked the question, but the answer popped into my head immediately. The character of Lola, the older drag queen who owns the bar Sam spends a lot of time in. Lola is a composite of several older drag queens I’ve known, and she represents many different aspects of queer life, both good and bad. The scenes where Sam visits her house and discovers the person behind the persona, and the scenes involving Lola’s mother and what has passed between them, were some of my favorites to write.

What do you hope that readers will take away from this book?

I never think about how readers will react to a book and am always delighted by their responses because often what they get from a book is nothing I ever considered while writing it. I think what I most hope for is that people will be surprised by this story, because I tried to make it something that would start taking them one place then do a couple of twists and turns and leave them somewhere entirely unexpected.

I’m currently working on another YA, which is again set in a small town and is about loneliness and friendship and queerness and what it means to grow old in our society when you have no one to share your life with. It’s also about how it’s okay to not love your own parents, even if you care about what happens to them as other human beings, because that’s something we seldom talk about and I think it’s another one of those things it’s very important for young people to know is okay.