‘Once and Future’ by Amy Rose Capetta and Cori McCarthy

‘Once and Future’ by Amy Rose Capetta and Cori McCarthy 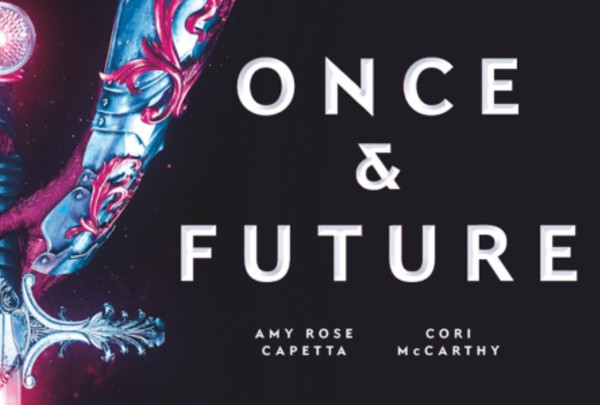 King Arthur in space doesn’t, upon immediate consideration, sound like something that could possibly work. And yet Once and Future by partners Amy Rose Capetta and Cori McCarthy is just that, and has the reader captured, hook, line, and sinker, from the first few pages on. Meet Ari, a young refugee from the planet of Ketch. Ari is blunt, brash, and a little too honest for her own good, she’s described as “a girl they couldn’t control … the scariest damn thing in the universe” and is certainly a heroine for our times.

We meet Ari and her adopted brother Kay as they’re are hopping from planet to planet to stay out of reach of Mercer associates who are out to capture Ari as an “illegal immigrant.” Ari is a known refugee of Ketch, one of the last planets to resist the corporate capitalist overtaking of Mercer. Mercer rules the universe via a monopoly on everything it takes to survive in space, like human necessities such as water. But Mercer hasn’t found Ari yet. Rescued by Kay and his moms (Captain Mom and Mom) after fleeing from Ketch, Kay is the only person Ari relies on in the entire galaxy. He’s her most loyal knight, a twist on the reincarnation tale that Merlin (yes, that Merlin) explains to them after they rescue him as a red-headed teen wizard from Old Earth.

Merlin’s fate is tied to Ari’s. She’s the latest incarnation of King Arthur, and it is her destiny to take on the Mercer corporation, and liberate the universe, uniting the disparate peoples of the solar system into a democracy. It’s a destiny that has never been fulfilled, and Merlin has reincarnated time and time again to find, train, and prepare Arthur to become the King of the Round Table–but each time, Arthur failed. Immortal, but cursed to age backwards, Merlin knows that Ari is his last chance to break the cycle. If Ari doesn’t fulfill her destiny, Merlin is doomed.

But times have changed since the last time Merlin was incarnated. Arthur’s a girl, and Guinevere is tougher than she used to be, a beautiful and courageous queen-turned-revolutionary. Knights can be of any gender, and will happily tell you so, and wonder why you’d ever doubt it. And Lancelot’s reincarnated form in this ‘verse keeps everyone guessing, including Merlin.

In an exuberant, fast-paced novel that blends elements of Joss Whedon’s Firefly with the political textures of The Hunger Games, and sprinkling in traditional Arthurian legend and lore–sly nods to other Arthur retellings, including the Disney animated versions, and delightful allusions to The Mists of Avalon—Once and Future is as rich as it is engaging. It has everything a fan of knights’ tales could want–dragon slaying, magic and mystery, star-crossed romance, and even a jousting tournament–though not quite in the way traditional Arthurian aficionados will recognize. Still, the spirit of King Arthur is undoubtedly present in this novel. Ari’s bravery, chivalry, and goodness of spirit are all obvious in the very first scene, and it’s clear why our woman-king protagonist inspires the loyalty she inspires. As Merlin trains her, taking Ari and the gang on quests with every heightening stakes, Ari’s kingly qualities rise to the surface. She just might fulfill her destiny; more importantly, she might save the universe doing so.