‘Miranda in Milan’ by Katharine Duckett

‘Miranda in Milan’ by Katharine Duckett 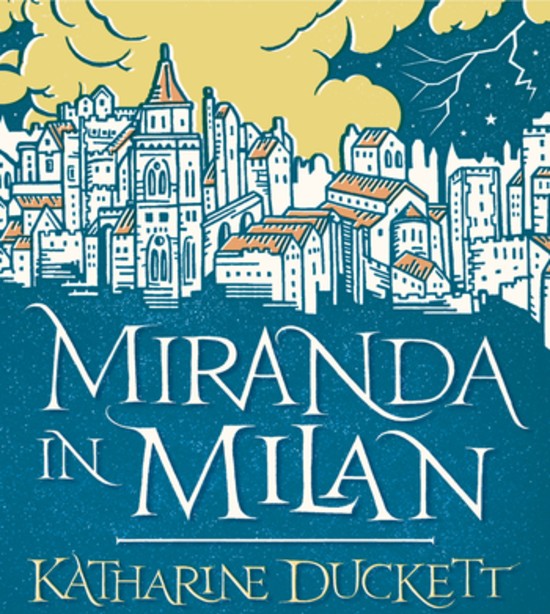 Miranda in Milan is an absolute delight. It’s essentially femslash for William Shakespeare’s The Tempest. After the dramatics covered in the original Shakespeare play, Miranda and her father Prospero make it back to Italy. Miranda finds herself confined to her room or carefully led through the halls of the castle with a thick veil over her face. The maids who attend her shy away from her, seeming frightened of her or even disgusted. The worst of these is Agata, a woman who’s in charge of the maids and who basically openly despises Miranda. Miranda hears murmurs of her mother’s name all over the castle. Ferdinand is at his father’s castle in Naples, seemingly forgetting about Miranda, their island marriage forgotten once the women of Italy were back in his sights.

Lonely and bored, Miranda finds herself falling for Dorothea, a maid who just so happens to be a fairly powerful witch. (Dorothea is something of a poet, and her words are beautiful: “Men would lose their art, for you.”) Her magic is no match for Prospero’s, and he doesn’t seem to be living up to his promise to leave his magic on the island. Dorothea gives Miranda a taste of freedom, both in her affection and in teaching Miranda about the secret maze of tunnels running behind the castle walls, a doorway to which is conveniently located in Miranda’s bedroom.

Exploring the tunnels one lonely night, Miranda comes upon her uncle Antonio, chained up in a hidden cell. He’s the one, after all, who usurped Prospero’s throne, and Prospero isn’t exactly the forgive and forget type. In fact, through Miranda’s reminisces, we learn that he’s quite a cruel man who doesn’t have any moral qualms about beating those he views as inferior to himself, like Caliban and Ariel, the island’s native inhabitants, or using magic on his daughter. As Miranda thinks more on her time on the island, she realizes that Prospero often used his magic to knock her out when she saw things she shouldn’t have.

After a mysterious figure leads Miranda to discover her mother’s portrait during a masked ball, Dorothea and Miranda decide to investigate the mystery of what happened to Miranda’s mother–Beatrice died when Miranda was very young, and no one in the castle will give her any answers about what her mother was like or how she died. Will using Dorothea’s magic answer Miranda’s questions, or will it only create new ones, important ones about Beatrice and Prospero’s shady past?

Katharine Duckett paints these borrowed characters beautifully. Self-important, prideful, abusive Prospero with his God complex is utterly believable, and Miranda’s frustrations about the scornful society she’s been transplanted into and wistful remembrances of the island, the only home she had ever known, are perfectly logical for her character in the play. Even with the queer love story between Miranda and Dorothea, Miranda in Milan feels very faithful to the source text.

This quick read is a complete joy. The writing’s excellent, the characters are complex, and the twists, while not shocking to me, were incredibly satisfying and creative. There’s intrigue around every corner and the love that blooms between Miranda and Dorothea, while it does happen pretty quickly, is charming and romantic. My only complaint is that poor Miranda never seems to have options. In The Tempest, she married the first and only eligible bachelor she ever met, and in Milan, she falls hard for the only person who’s remotely kind to her. Would she still love Dorothea if she had free range of the castle, if she were allowed to move about freely with her face revealed to the world? I like to think that she would.

All in all, a terrific read. I would strongly recommend this to anyone who’s interested in queer romance, mystery, magic and the occult, or Shakespeare. Or, honestly, anyone looking for an entertaining, engaging few hours.