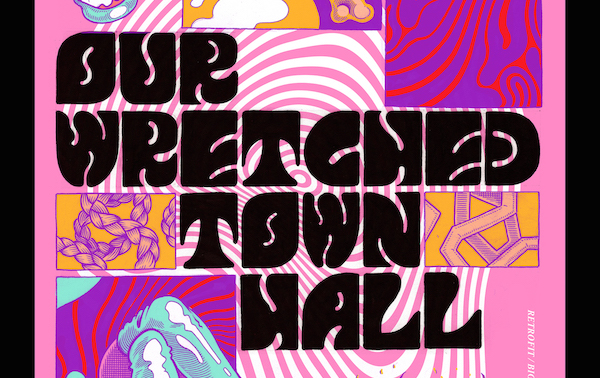 If Act Up politics of the 1980s were somehow jettisoned into the present, blended with psychedelic pastel salt water taffy, and scored with a soundtrack of Incense and Peppermints, you might end up with something close to Eric Kostiuk Williams’ new book, Our Wretched Town Hall (a finalist  for a 2019 Lambda Literary Award). Don’t underestimate this slim compilation of comics, posters, and commentary: it’s easily one of the best comic books of the year.

The flow of these short tales, both true and imaginary, all merge to become Williams’ commentary on the state of the world around him. That includes the title, which Williams explains, “is me thinking of the stories’ themes as being part of a figurative ‘townhall’/state of the union type assessment of things.” An opening story, “No. 1 Song in Heaven,” praises the importance of an ultimate club and dance party (“we’ve been aching for a spot like this to open up”), then bumps into a story about a woman who swipes a stone from a Yoko Ono art piece. Inscribed Love Yourself, “…the stolen rock is valued at $17,500 USD,” the price standing in stark contrast to the original artistic sentiment. That tale drifts into “Videofags Here for a Real Good Time,” about a real Toronto art/performance space whose founder Keith Cole warns, “one day it will all be gone. Use it now and use it often.” Right away readers will sense common themes of the importance of shared space and collaboration, and of the intrusion of money and gentrification into these treasured human assets.

“Twanking” addresses aging and the commodification of youth, specifically among gay men. “What if nobody wants me?” a skull-faced Williams asks, terrified of twanking out of twinkhood. “Be the truest you possible. Be visible. Be someone that younger-you might have found some comfort in seeing around,” his guardian angel, the Willendorf Braid (also featured in his book Condo Heartbreak Disco) wisely advises.

A centerpiece of the book is the story “Grand Opening,” which confronts the gentrification and commodification of gay culture head-on. Queer restaurant workers thwart a conservative who ridicules an increase in minimum wage, while he hypocritically has sex with underpaid restaurant staff. The workers turn him into the restaurant, stripping his flesh for steaks, milking his nipples for juice. The restaurant’s a huge hit. When a customer asks a waiter, “I know everything is local here, but is the farming ethical?” the waiter can only reply, “There are no ethics in the restaurant business.”

Williams’ art is what makes an over-the-top story like this flourish, twisting and manipulating the conservative’s body from a person into what looks like a flesh-colored bouncy-castle. His art easily combines street art with cosmic plasma, political activism with grand ideas like love, self-identity, and even what happens to us when we die.

One of the comic’s most memorable scenes is a psychedelically illustrated death-bed conversation between two characters:

“Considering how dreams can alter our sense of time, it’s entirely possible that an all-at-once dose of the dreaming chemical could induce…eternity.”

“Yes. But your memories are becoming intertwined with the universal consciousness.”

Williams’ skillful, mind-expanding art is the perfect medium to let us gaze at our own demise, with wisdom and empathy. But in a refreshing right face from self-help platitudes, this comic of queer-loving and support resurrects the bite of David Wojnarowicz, inspiring readers with a fierce sense of humor and an activist rallying call.

'The Less Than Epic Adventures of TJ and Amal' by E.K. Weaver
Emerge: 2016 Lambda Literary Fellows Anthology
Poets Respond to the Rescission of DACA