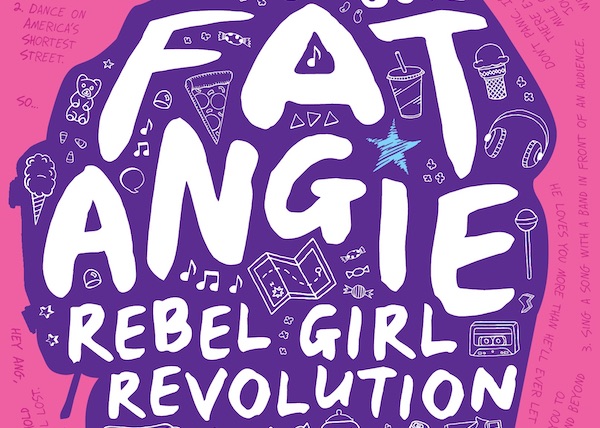 Fat Angie: Rebel Girl Revolution by e.E. Charlton-Trujillo is unique among young adult novels, effortlessly weaving together what some might consider “adult” themes, most particularly the theme of grief among one small, dysfunctional family, into the high-school-roadtrip-coming-of-age genre. The novel opens with Angie–known among her peers as Fat Angie–about to start her first day of her sophomore year of high school. She’s starting without a friend or support system in sight: her delinquent adopted brother, Wang, doesn’t acknowledge her at school; her best friend Jake has stood her up; and the girl she had a whirlwind summer fling with, KC Romance, has moved to Texas to try to bond with her estranged father, all leaving Angie high and dry. To make matters worse, her former best friend, Jamboree Memphis Jordan, has returned from a summer abroad that seems to have included a total makeover: once chubby and overlooked, just like Angie, Jamboree is now thin, trendy, and unmistakably cool–and Angie feels more ostracized and lonely than ever.

With no one on her side at the start of sophomore year, Angie’s school year starts off as bad as can be expected–even worse, maybe, than she’d expected. Because at the end of last year, after the news of her war hero sister’s death in combat, Angie had a very serious, and very public, mental and emotional breakdown. Charlton-Trujillo does a heartbreakingly excellent job at capturing the casual cruelty of teenagers–rather than flocking to Angie with support and understanding, the kids in her class react to her as a freak and leave her feeling lonelier than ever.

Charlton-Trujillo is subtle as she highlights power dynamics with regard to interactions among teens; Angie is specifically targeted for bullying for several reasons: she’s fat, she’s visibly mentally ill, and she’s out and queer in the small, conservative town of Dryfalls, Ohio. Other students who might similarly have a freak flag tied to their backs manage to skirt under the radar. Jamboree loses weight, gets a major wardrobe update, and starts dating a jock, thus taking her from loser status to a tentative member of the in-crowd. Zeke, Jamboree’s close friend, is out and proud, with her gender and sexuality fluid and her politics as in-your-face as they can be, and while she certainly has struggles of her own that keep her from being perceived as totally ‘normal,’ her powerhouse attitude–overwhelming at times–protects her in a way that Angie’s anxious bereavement does not.

Angie’s year goes from bad to worse. Hideously bullied by jock leader Gary Klein; forced to participate in yet another phony ceremonial dedicated to her sister; harassed and emotionally abused by her mother due to her weight and queerness; it starts to feel like it’s too much for Angie, and something’s gotta give. In a fit of stress-induced rage, Angie makes a run for it, enlisting Jamboree, Zeke, and jock-outcast Darius on an impromptu roadtrip, the dying wish of her sister. Here, Angie learns that even the most effortless of in-crowd members hide secrets and woes–not least of all, her late sister, who joined the army to get away from her mother, and paid for it with her life. By following the dying wishes of her sister Nat, Angie unintentionally creates her own rebel girl revolution, doing things she never knew she was brave enough to do. Most importantly, Angie learns that she can feel her own feelings, and in the process, finally manages to grieve authentically for the sister she lost. Her journey to self-confidence encompasses a journey into vulnerability, and the courage it takes to bear our soft and squishy bits and allow others to love us. It doesn’t work out perfectly–nothing ever does–but Angie goes out on a roadtrip to release her sister, and when she comes home, she comes home to herself.

e.E. Charlton-Trujillo does an amazing job portraying her entire cast of characters, making each of them seem fully realized and distinct. She handles issues of mental illness, grief, loneliness, and even the cringe-inducing abuse and bullying that Angie suffers with deftness and grace. More importantly, Charlton-Trujillo allows space for hope and strength in Angie’s story while avoiding the neat packaging of a happily ever after. As Angie realizes, “her life…was never going to be a made-for-television Christmas movie…but it was hers,” which, in the end, is all any of us can hope for.

'The Straight State: Sexuality and Citizenship in Twentieth-Century America' by Margot Canaday
'Thalassa: One Week in a Provincetown Dune Shack' by Allen Young
'Beyond Magenta: Transgender Teens Speak Out' by Susan Kuklin