‘Not Everything Thrown Starts a Revolution’ by Stephen S. Mills

‘Not Everything Thrown Starts a Revolution’ by Stephen S. Mills 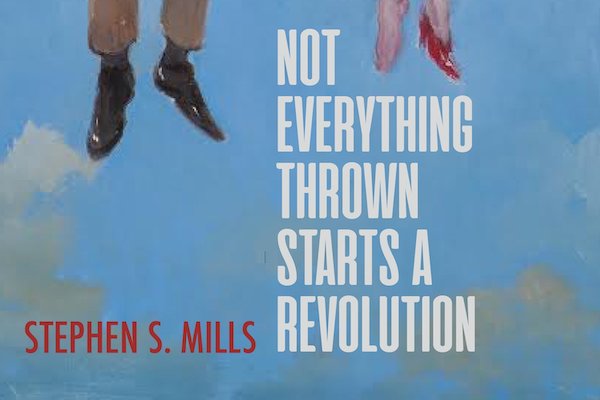 Stephen S. Mills’ Not Everything Thrown Starts a Revolution is an interesting exercise in historical contrasts. He approaches his poems as though they were chapters in two parallel and interwoven tales–one historical and the other contemporary–and his clean and contemporary style deceptively blurs the line between fiction and poetry.

Part 1 of Mills’ collection is told from the perspective of an 18th century red-headed New England wife, Mary Agnes, who resorts to “suicide by proxy” (a phenomenon Mills explains he first learned of after reading two articles by the scholar and teacher Kathy Stuart). Incarcerated in a loveless marriage and shackled by conventional 18th century gender roles, Mary Agnes suffers from “melancholia” or “an excess of black bile.” Mills writes in his opening poem, “18th Century Melancholia”:

No, this is about what people used to call an excess of black bile
_____(I’m not making that up).
Yes, this story is about black bile and numbness
_____and a quiet sadness that swallows logic
and an all-too-familiar fascination
_____with everything stopping—
every single thing.

The poems that follow narrate the sad fate of Mary Agnes: her marriage, her daily life, her forced religious piety, and, ultimately, her act of murder. After drowning a child in an attempt to expiate her own (mortally sinful) desire to kill herself, she is executed, hanged publicly in the town square.

During her life, Mary Agnes was haunted by the suicide of her neighbor, John Plymouth, who was excoriated by the Christian community after his death and denied proper burial. Reimagining his suicide, she sees in it liberation from her own tedious marriage:

The sight of it all.
Her own body suddenly as free
as his from breath.
No husband left.

She imagines suicide as a release from her own melancholy as she contemplates Plymouth’s act of stabbing himself: “For he left this world by choice. / By his own hand. / A hand that once took knife to bark.”[…] “It is almost enough to shake/ the melancholy from my bones.”

Mills captures the style of this earlier age. He interrupts the flow with frequent parenthetical interjections to address the reader directly, a device that mirrors 18th century novelists such as Fielding and Richardson, and also echoes the use at the time of the “spectator figure” to provide commentary and interpretation of the story. He also creates poem titles, which read like 18th century chapter headings, captioning the ensuing situation and underscoring key developments.

The poems in Part 2 are set in present-day New York and from the perspective of a 21st century gay man, but they parallel Mary Agnes’ narrative. Mary Agnes and the “I” of Part 2 share several similarities. Most superficially, they both have red hair, historically associated with wickedness and evil behavior, which Mills discusses in the poem “For the Devil Work in the Red That Spins Your Finger.” Second, both suffer incarceration, guilt, and oppression in their lives; they are both ostracized for a criminal offense. They both struggle with feelings of being societal outcasts by their natures and physical attributes; they harbor transgressive sexual desires, invite censure from their religious communities, and betray common gender stereotypes. And they are both plagued by melancholy or clinical depression and confronted by thoughts of suicide.

Mills addresses this most directly in Part 2 with the poem “Our Hero (Question Mark) Faces Suicide (Not His).” In a parallel to Mary Agnes’ consideration of suicide in deference to the story of John Plymouth, the speaker in this poem encounters a man planning to jump off a New York bridge on his way home from work. The speaker intervenes in an attempt to talk him out of it, despite being two weeks out of jail for a crime of violence from which he has incurred painful physical injuries. He feels tremendous guilt about being a convicted felon, and despondent over his behavior and his life. As with Mary Agnes, there is a questioning of meaning, purpose, and self-behavior. Mills writes:

. . . he wants to kill himself.
That there’s a bridge on his way home.
In New York, there’s always a bridge.
He wants water to cleanse his sins away.
No one will know why. No one will know
what’s taken place in this room except me.
He doesn’t know anything about my ribs.
Or that each breath I give him sends pain
through my chest. He doesn’t know
that I’m looking for my own water.

But he wants to die. And it is my job—
in this moment—to stop him.
To tell him life is worth continuing.
That mystery is often worse than fact.

Our 21st century speaker is also “looking for my own water,” his own suicidal outlet and solution. The water imagery here links nicely with Mary Agnes’ drowning of the young boy Obadiah in the river in her act of proxy, with its biblical connotation of the absolution of sins and cleansing from guilt. The creative device of using Mary Agnes as alter ego to the poet-speaker also touches on many contrasting themes such as marriage, both from past traditions of heterosexual society and the newer right of homosexuals; American domestic tension; our national politics, norms and mores; society’s questions of masculinity and femininity; and the dissonance between sexual behavior and romantic love.

Both Mary Agnes and the contemporary speaker, in the end, bend to the will of their communities and historical milieus. They must accept their communities’ beliefs and judgments, and are forced to acknowledge their weaknesses and submit to an imperfect system as they ultimately accept the imperfection of the human condition.

In the book’s structure and conceit, Mills makes a conscious gamble with the juxtaposition of two contrasting stories and literary eras. He has a remarkable ear for the vernacular of both early 18th Century America and that of present-day New York, and a versatility in presenting the interior thoughts and emotions of his narrators. This new collection reminded me of Michael Cunningham’s The Hours, where the stories told from the perspectives of three women in different time periods similarly intertwine, each speaking to their gender, their yearnings and fears, and the self-destructive force that attends their lives. Mills’ interconnections between his speakers and eras are imaginative and well executed, even if they can at times feel slightly premeditated or contrived. But given the strength of Mills’ writing, that’s of very minor concern.