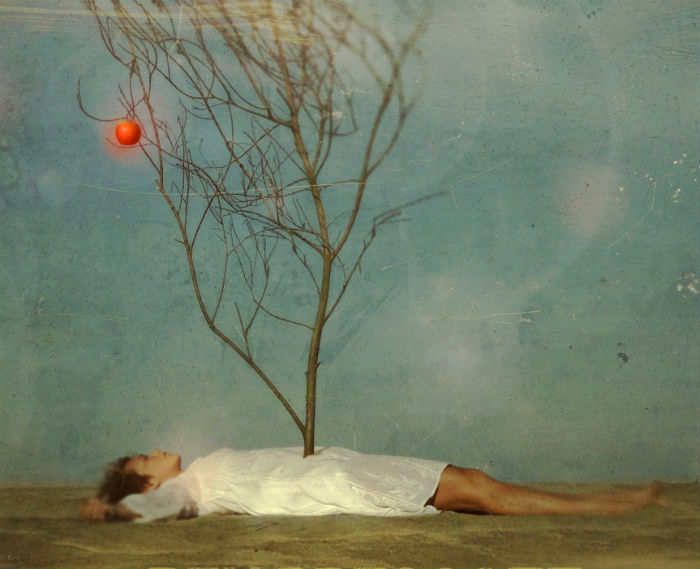 “[Sharon] believed in the universe. With or without humans, Earth would keep spinning among the celestial things. The notion was comforting.”

The year is 2092 and in a mere 74 years, our world has changed dramatically. The spinning Earth is less and less hospitable to humans. Famine, frequent monster storms, disease, two world wars, and other political strife have transformed the United States of America into a mostly wild, semi-feudalistic conglomeration under the National Order of North America, or NONA. People in what’s left of American cities are starving and dying. The “bread basket” of the mid-continent is a desert where very little grows. Beetles are a primary source of protein and much of what fruit exists is poisonous.

During this time, Sharon Clausen,a New England generational farmer, and her wife, Eve, are quietly struggling to subsist on their precious few crops, including their apple tree. The apple tree is more than just a source of food: “In the tradition of her mother’s Abenaki ancestry, Sharon believed the apple tree had been Earth’s gift in response to her family’s devotion to nature.” A survivor of her times, Sharon has largely shut herself off from the outside world. Indeed, Eve and Sharon’s love is the source of most of Sharon’s humanity. But Eve has been stricken with leukemia and securing treatment for her disease forces the couple to regularly venture into what’s left of Boston to see a doctor.

On one such trip to Boston the women discover that NONA has issued orders to round up anyone of Asian descent, presumably as possible spies for the United Kingdom of Asia. During this chaotic, fear-mongering ploy, Eve is captured and detained. Not trusting others to the task, Sharon is compelled to rescue Eve.

Thus 2º becomes a classic quest tale as Sharon travels from New England to find the Asian internment camp in Chicago, and then on to San Francisco and finally back again in order to save Eve. The novel allows Prescott to narrate for readers the catastrophic changes that have occurred in North America in a mere three quarters of a century: economic and political collapses following extreme changes in the environment. The human race struggles to stay alive in the world it has created.

2º is a clarion warning for us all. Prescott is clearly attempting to wake her readers to the precarious state of the world. This is perhaps most poignantly illustrated by a photo of Sharon as a baby wherein the subjects appear “unaware of the horror to come when Earth’s backlash against humanity would plunge the world into chaos.”

Despite the well-researched, scientifically-based vision of humankind’s grim future, not everything in 2º is bleak. Prescott suggests some impressive developments in technology: there are remarkable flying machines and other transportation and the extraordinary technology at Sharon’s farm. There also is the hopeful invention of a cryo-converter that allows humans to burn plastic as fuel without emitting harm.

Finally, 2º is a love letter to the planet Earth. Indeed, during Sharon’s journey she finds herself re-evaluating her shuttered soul, observing, “The stunning craggy mountains to the west seemed to have their own gravity, pulling her to them. Snow capped only the highest of them. From her perspective in the sky, the enormity of earth revealed itself. God, it’s beautiful. She stumbled over the word god in her head.”

Fast-paced and plot driven 2º contains a few unexpected twists and an edge-of-the-seat ending. The action moves quickly and keeps the reader engaged. The epilogue contains the promise of some hope for humans in a very different world. Perhaps more importantly, 2º is a thought-provoking read that might prompt readers to assess their carbon footprint.